Cocktail of pollutants in waterways

A WATER quality specialist, who has dedicated more than 10 years to studying rivers in Malaysia, says he will never plod through Kuala Lumpur’s highly polluted waterways.

“I will never wade in Kuala Lumpur’s rivers because the bacterial level is very high,’’ Dr Zaki Zainudin told StarMetro.

“That is for swimming and recreation and whatever that involves touching the water.

“But the reading is in the thousands and can even go up to hundreds of thousands in Sungai Gombak and Sungai Klang,” he said. An aerial view of the Kampung Bohol flood retention pond. The silting (yellowed water) is an obvious effect of sand washing activity which also causes other forms of pollution that endanger people’s health.

Dr Zaki said anyone, with an open wound, swimming in the city’s rivers could easily develop an infection.

“That is why you don’t see people swimming in rivers in Kuala Lumpur today,” he said.

The government allocated a whopping RM3.4bil under the River of Life (RoL) project to clean the city’s Sungai Klang and Sungai Gombak as well as six tributaries covering a combined 110km within the Greater Klang Valley region.

The beautification and landscaping costing RM1bil focuses on a 10.7km stretch along the Sungai Klang and Sungai Gombak river corridors.

Dr Zaki, however, said the Government was nowhere near achieving that target as the rivers were very polluted and it would take a lot more work to reach Class IIB status.

“At some riverbanks, the soil contains certain types of metal and if you were to mine the area, the metals will leach out,” he said.

“Basically the metals are naturally present in the soil. Most common are iron and manganese and in certain areas, arsenic and aluminium.

“Organics are also present in the soil, and can get out too during mining activities. All these substances can leach out during sand mining activities. It is a cocktail of pollutants,” he said, adding that the effect on people depended on its level and what awaited downstream. An officer from a government agency inspecting a sand washing site.

Dr Zaki said the way forward to address the matter was for all government agencies to work together and resolve jurisdiction issues to stop the pollution.

“Take the RoL corridor as an example. It covers Kuala Lumpur and Selangor.

“So depending on where the boundary is, the authorities must work together to combat illegal activities when it comes to illegal sand washing/mining.

“The governing authority in Selangor is Selangor Water Management Authority (Luas), and it is quite proactive in fighting illegal sand mining activity.

“Over in Kuala Lumpur, it is PTG’s jurisdiction (Federal Territories Land and Mines Office) and multiple other agencies but everyone passes the buck.

“That has been happening for years and years, so it is interesting to see where this goes now, especially with a new government in charge,” he said.

Dr Zaki, however, added that the problem was not only prevalent in Kuala Lumpur but throughout Malaysia.

“Even in Bentong, Pahang, sand mining is taking place upstream near a water intake plant. It is happening everywhere,” he said.

Kuala Lumpur Drainage and Irrigation Department (JPS) director Nishad Mohamed Mohd Shaffy agreed that jurisdiction issues should be resolved quickly but added that landowners must be made accountable for illegal activities taking place on their land.

“Landowners should take responsibility if their land is being used for illegal activities and not for its intended purpose,” he said.

Nishad said a permanent solution was needed to stop the operators (illegal sand mining) as the rivers’ condition was getting from bad to worse.

“Sad to say that despite the billions being spent on river cleansing efforts and public outreach programmes, the quantum of rubbish pulled out of Sungai Klang has not reduced at all.

“The amount of rubbish we pull out of Sungai Klang is approximately 170,000 tonnes each year >as well as untreated sewage discharged directly into the rivers,” he said. 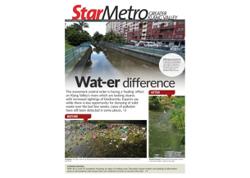