FATHER Michael Thoo, who had served as a parish priest since 2002, breathed his last on Saturday. He was 85.

Over 800 people paid their last respects to him at the Church of Our Lady of Sorrows in Macalister Road, George Town, on Monday.

“The late Father Thoo was ordained on March 28, 1965 and after a faithful service of 54 years, he passed away peacefully. 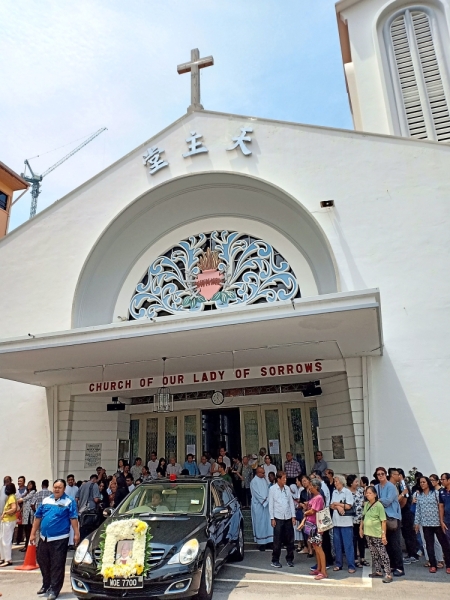 People gathering to bid farewell to Father Michael Thoo at his funeral mass at the church of Our Lady of Sorrows in Macalister road, Penang.

“This is just five days short of March 28 this year, the day he was ordained.

“We gather to say goodbye to Father Thoo, but not forever, as we are assured of meeting again in heaven one day,” he said in a homily at the funeral mass at the church on Monday.

The hearse carrying Father Thoo’s coffin then left for a burial service at the Catholic Cemetery in Jalan Kelawai after a three-day wake since Saturday.