Don: Work together to eradicate dengue

During the Defeat Dengue with BASF programme, apart from identifying and destroying mosquito breeding grounds, the residents had other games and activities to liven up the day.

THE dengue virus can persist in Aedes mosquitoes for up to five successive insect generations before they are free of it – with each generation capable of infecting the population with the virus.

“This is an exponential growth and when the larvae turns into a mosquito, the cycle starts again,” she said.

For this reason, Dr Hidayatul said it was best to target the eradication of Aedes mosquitoes during the immature stage.

She added that it was vital for people to understand that dengue is dangerous and is preventable. 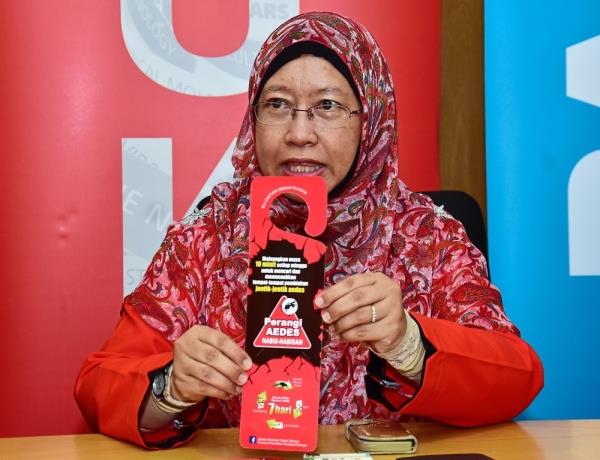 “Any effort at dengue management will not work if it is done in silos,” she said.

As an example, she said, a homeowner who diligently cleaned and removed any potential mosquito breeding site could still contract the virus if her neighbours did not follow her actions.

“The Aedes aegypti species are more dangerous because they can fly a distance of 400m radius, whereas the Aedes albopictus that thrives outdoors can only fly 80m.

“But both species carry the dengue virus, so you are not safe indoors or outdoors.

“Imagine if I allow fogging to be carried out inside my home but my neighbour does not. The Aedes aegypti can fly very far and come to my house,” she said. 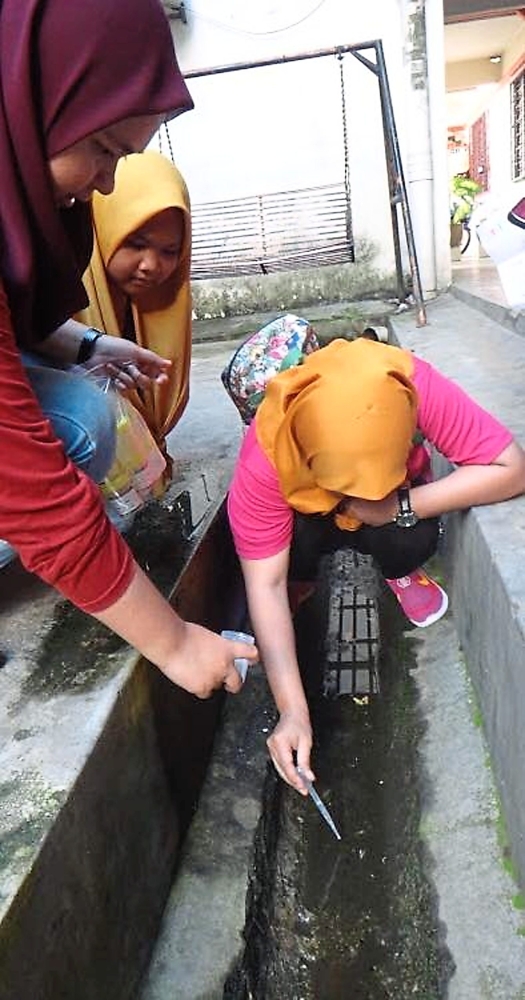 During the Defeat Dengue with BASF programme, residents were divided into teams and taught how to inspect, identify and destroy mosquito breeding grounds, but with game-like elements.

Dr Hidayatul added that Malaysia had seen a steep increase in the number of dengue cases since late last year, with the upward trend continuing into the first quarter of 2019.

Based on statistics in the iDengue website, 33,544 cases were recorded from Dec 30 last year to March 21 nationwide, with 57 deaths reported.

Of this, Selangor accounted for 58% of the reported cases at 19, 574 cases. There are currently 166 dengue hotspots throughout the state.

“We were seeing a drop in numbers for the past two years, which also meant that dengue management efforts were seeing results.

“However, part of the reason for the spike in cases was that we became complacent.

“Even if numbers drop, we should not slow down on community outreach programmes,” she said.

Dr Hidayatul, who has been conducting studies on Aedes mosquitoes for more than 20 years, said the most effective and sustainable way to eradicate the virus was the search-and-destroy of mosquito breeding grounds.

While government authorities try to hammer in the need for proactive action by the community, Dr Hidayatul said sometimes creative methods were needed to drive in the message.

She said in this aspect, local authorities could team up with private companies to organise programmes to raise awareness and inspire communities to work together.

“The Health Ministry and local authorities have been championing the search-and-destroy method to eradicate dengue, including disseminating information circulars about the dangers of dengue and what they have to do.

“But most people do not bother to read them or they don’t absorb the information. 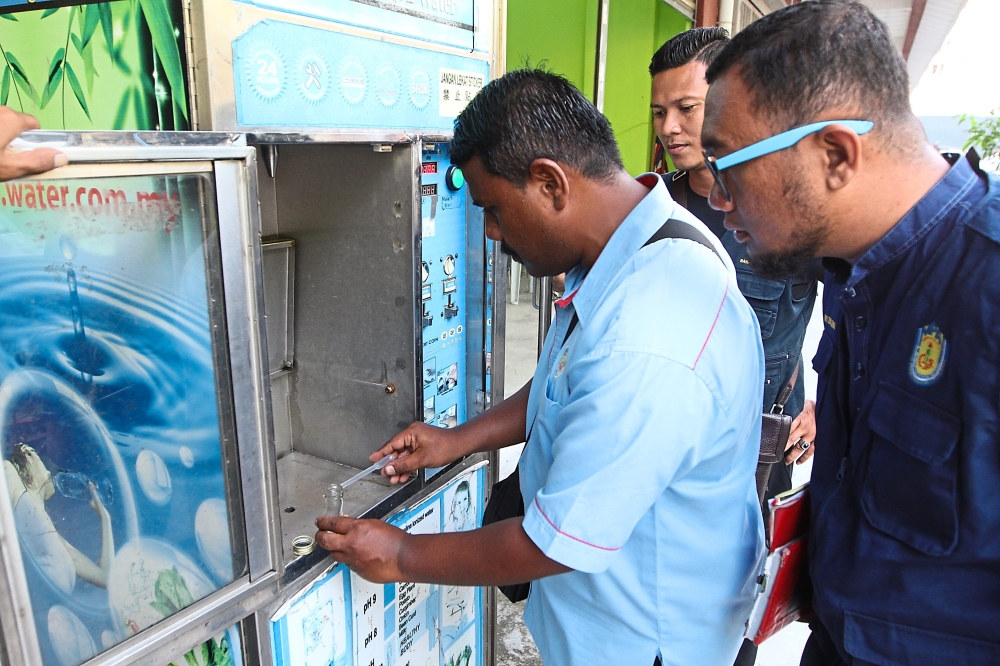 “We recently collaborated with BASF Malaysia to carry out a pilot project where we introduced a fun half-day event at three locations in Selangor,” she said.Dengue hotspots in Precint 9A, Putrajaya, Apartment Idaman in Damansara Damai, and Bandar Tasik Kesuma Fasa 6 in Kajang were chosen for the Defeat Dengue with BASF programme.

During the event, residents were divided into teams and taught how to inspect, identify and destroy mosquito breeding grounds in their neighbourhoods.

“We made the entire experience into a game and showed educational videos.

“This seems like a simple programme, but it motivated residents to conduct search-and-destroy activities consistently following the event.

“Within six months, there were zero dengue cases in these areas when prior to that there was an average of 10 cases a month,” Dr Hidayatul said.

The two parties have also signed an agreement to conduct the programme in four other dengue-prone areas this year.

She said the games and videos helped to reinforce the message and knowledge of dengue eradication through a fun and creative way.

In a more practical approach, Ampang Jaya Municipal Council (MPAJ) recently came up with design modifications to the ovitrap as an aesthetically-pleasing mosquito trap. 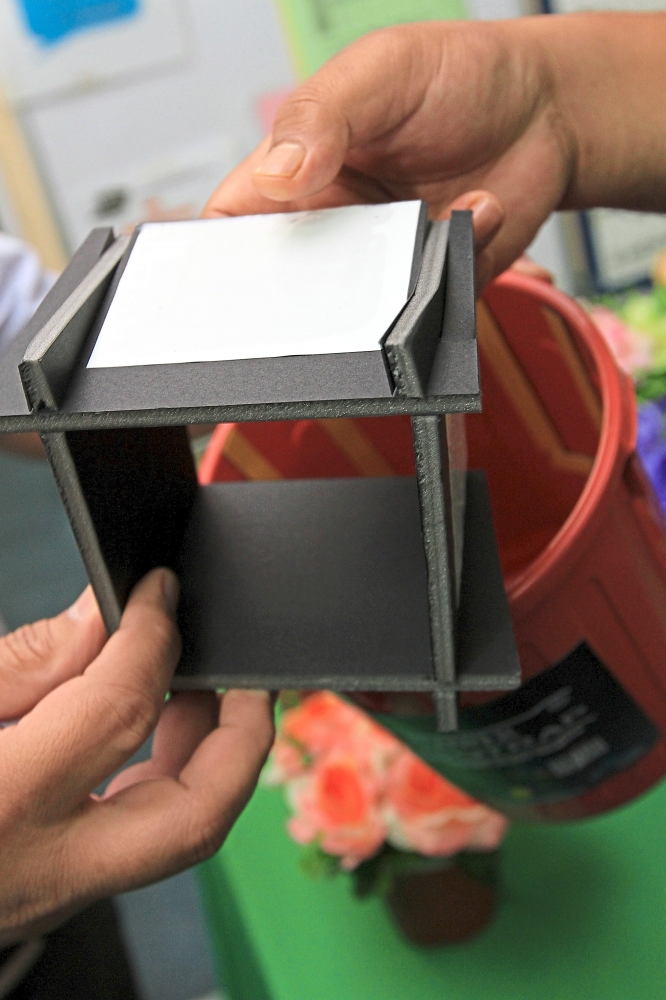 The Flower MosQtrap helps reduce the use of chemical insecticide and kills adult mosquitoes and the larvae.

Called Flower MosQtrap, the device mimics the mosquito’s preferred breeding site and traps the adult mosquito with a sticky surface.Health Department director Dr Sarodin Shahri said the device was an effective way to kill mosquitoes without the need for chemicals and could last up to six months before the sticker can be replaced.

“Various products have been introduced to control the Aedes mosquito outbreak. But these products have their own drawback in its efficacy.

“For example, the use of chemical insecticide for fogging and larviciding has caused the mosquitoes to develop a resistance towards it.

“This trap is a passive method to kill the insects and is effective in vector control,” he said, adding that a team from the health department came up with the design. With a state allocation of RM15,000 the team was able to produce 300 units of the Flower MosQtrap.

The device will be distributed to six other councils, including municipal councils of Klang, Shah Alam, Sepang, Kajang, Selayang as well as the Johor Baru City Council.

Another project that is seeing results is the use of Wolbachia-infected Aedes mosquitoes to combat dengue in outbreak-prone areas in the Klang Valley.

In a pilot project in 2017, the Health Ministry with the Institute for Medical Research (IMR), released the mosquitoes injected with the Wolbachia bacteria as a biological method of controlling Aedes mosquito’s reproduction.

Dr Sarodin said during a dengue epidemic period, the community must be mobilised to react.

“Community involvement is the most crucial element, but to change people’s attitude is very challenging.

“Most people think the authorities should be the one to deal with dengue, but it would be impossible for us to clean every area every day.

“They rely on fogging when there is a dengue outbreak, but it is the least effective method to control the mosquito population,” Dr Sarodin added. Dr Sarodin says the use of chemical insecticide for fogging and larviciding causes mosquitoes to develop a resistance towards it.

He explained that studies showed only 30% of adult mosquitoes are killed during fogging and that frequent fogging was not advisable as this would lead to chemical resistance.

“Residents think that combating dengue is only the government’s job, not theirs and they wash their hands off the issue.

“When council staff come to fog their neighbourhoods, they don’t even open their doors.

“We have to put effort to attract people in the community to be involved and participate to reduce the risks of dengue transmission,” he said.