IT WAS a feast for the eyes and a hive of activity at the Star WOW Fiesta 2019.

The fiesta, held for the third year running, was organised in celebration of International Women’s Day and The Star’s WOW-Women do Wonders campaign.

Visitors were spoilt with many informative and inspirational talks, live performances, and the chance to participate in workshops and workouts while squeezing in a little shopping on the fifth floor of The Starling Mall, Damansara Uptown, Petaling Jaya.

The positive vibes around the fiesta were not just confined to the talks and activities, but also emanated from signboards with messages like #labelfree, “Your potential is endless”, “Empowered women, empower women”, and “We are all wonder women”.

Such messages were also seen surrounding the bazaar centre where more than 100 booths, many of which were set up by women entrepreneurs, including homegrown business owners, local artisans and craft makers, drew visitors from 11am to 8pm during the fiesta weekend. 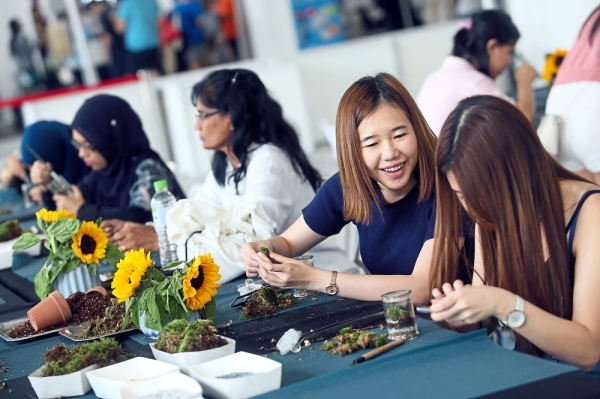 Participants of the terrarium workshop focusing on the enjoyment of making their own little terrariums.

There were booths offering health and wellness checks, make-up, healthy snacks, clothes and those catering to in-trend hobbies like terrariums.

There were also booths for fit mums and senior citizens.

The SeniorsAloud booth promoted not only activities for seniors, but also career opportunities through Hire.Seniors and short-courses with University of The Third Age (U3A). (From left) Aimanissa, Nazierah and Aliah watching the demonstration by trainers Quek Chun Leng and Carol Wong Xin Yi during the self-defence for women and children session at the fiesta.

“Moleq (molek) means pretty in Malay, so we want our customers to feel beautiful and confident wearing our kebaya,” said Mazu.

The bazaar also saw young entrepreneurs who were introducing their fledgling businesses. Ficus and Jars founder Faisal Hashim (centre) and participants of his workshop proudly showing off the adorable terrariums they made after an hour’s class at the Star WOW Fiesta 2019.

Michelle Tan, 27, the founder of Lunalis Co introduced her year-old delicate, limited and exquisite jewellery designs of rings, earrings and necklaces at the bazaar.

Imported from countries like Japan, Hong Kong and South Korea, the highlight among Tan’s products were the pieces with “dancing stones” and her self-designed travel jewellery pouch she calls “Travel Rock and Roll”.

Katrina Loh, 27, attracted attention at her booth with colourful desserts; but they were not the ones for eating but to bathe with. Dr. Saritha Dharan (left) and Jennifer Koay taking a wefie at the photo booth on the first day of the fiesta.

Loh runs Royal Bath Co, a business she has had since 2017, selling soaps, bath bombs and shower steamers and scrubs.

Her whimsical bath bombs were shaped like donuts and cupcakes.

“I design them depending on my mood but it’s usually dessert style,” she said.

Besides the booths, the two-day fiesta was abuzz with interesting activities as well. Sunshine Aileen (left) trying out the lipsticks available at the Heidaia Beauty booth.

There were self-defence classes, zumba sessions and workshops on terrariums, floral watercolouring and a children’s colouring competition.

Overall, the fiesta drew positive response from visitors. It was Deelina Kamaruddin’s second time returning to the fiesta.

This year, she attended both days.

Deelina, 43, who is a part-time yoga instructor, digital marketer and real-estate agent, said she felt empowered at the fiesta last year and made it a point to return to support the event. 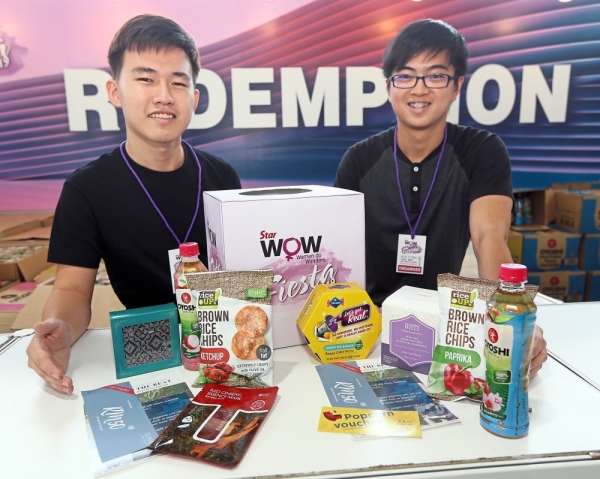 Visitors to the Star WOW Fiesta 2019 received many vouchers for a variety of products, assorted Oyoshi drinks and health and wellness products at the redemption booth.

Deelina also took part in back-to-back yoga and zumba sessions on Day 2 of the fiesta.

Sunshine Aileen Devi, a yoga practitioner, who also took part in the zumba class had high praise for the fiesta.

“The bazaar is very engaging and it brings every woman together.” 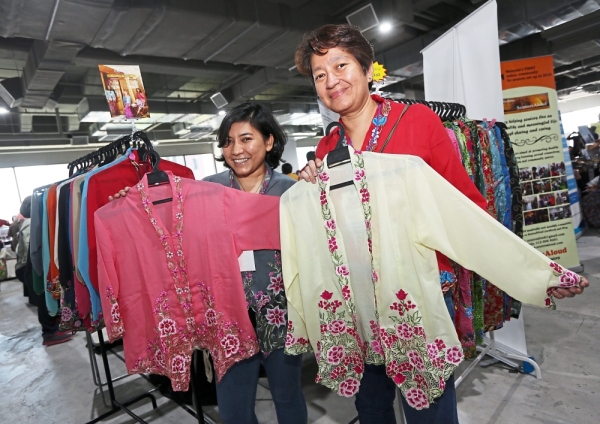 Mazu (left) and Azrina of Kebaya Nyonya Moleq debuted their kebaya collection for the first time at Star WOW Fiesta.

“This is an illuminating fiesta where you can discover great products and encounter friendly people,” she added.

Zumba instructor Azila Abdul Aziz, who drew close to 30 participants to her high-spirited session, said she hoped to see a fashion show that celebrates the beauty of everyday women regardless of their body shapes in the next Star WOW Fiesta.

Azila’s workout session was one of the highlights on the second day of the fiesta where no one was too young to participate.

Spotted in the vibrant class was two-year-old toddler Ophelia Azizi, who danced along adorably to the upbeat music by mimicking all her mother’s moves.

“This was a fun experience for our family to enjoy together,” said Nurazuranie Osman, 32, who has been practising zumba for the past four years. Lunalis founder Tan sold limited exquisite jewellery, including those with dancing stones, imported from Japan, Hong Kong and Korea at her booth.

With the recent vicious attack on a defenseless woman that had gripped the entire nation, self-defence has been on everyone’s lips.

Among the participants of the self-defence workout session with Bujinkan Hachimon Dojo, were three fresh graduates who all agreed that the class was very informative and helpful for the women.

“Before this, I did not realise that we could distract the assailant by pinching them,” said 22-year-old Aimanissa Sulaiman. 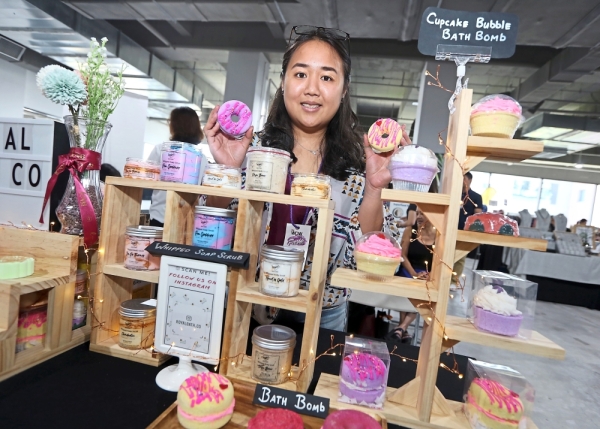 “I wish to attend more classes like this in the future because all women should possess the basic knowledge of self-defence,” said 23-year-old Aliah Alhabshi.

Mother-of-two Chan Chung Leng, who attended the class with her son Evan, 6, and daughter Gwendelyn Lim, 9, said it was good for her children to learn what to do in different situations.

The Starling Mall and MBO Cinemas were official venue sponsors.