Zuraida looking at workers assembling the panels before concrete is poured on them. On her left is Lim.

PROPERTY developer LBS Bina Group Bhd will be able to build up to 4,000 affordable properties a year following the commissioning of its RM40mil industrialised building system (IBS) precast concrete plant in Nilai.

The plant, located on a 2.83ha plot and operated by its subsidiary MGB Bhd, was a joint venture with China’s Sany Group.

MGB Bhd group managing director Tan Sri Lim Hock San said the Nilai facility had a maximum capacity to produce panels to build up to 4,000 units of apartments or landed properties per year.

The plant would produce and sell a range of IBS components, including precast concrete and wall panels, slabs, columns and beams.

It is the company’s second production facility after its first mobile plant in Alam Perdana, Selangor.

“The first mobile plant in Alam Perdana deployed last May has a production capacity to build 2,000 units of properties per year and has successfully produced and

supplied material for a pilot project which comprised 673 units of double-storey terrace houses,” Lim said at the official opening of its Nilai plant by Housing and Local Government Minister Zuraida Kamaruddin.

He said MGB has been using the IBS technology for the past 10 years and has to date delivered more than 15,000 affordable units.

“Our focus previously was mainly on IBS steel and aluminium formworks but today, we are stepping up our efforts by expanding our operation into IBS precast concrete which we believe is the future of the construction industry.

“This is a unique technology because the building components are prefabricated in a factory and then delivered to construction sites to be assembled,” he said, adding that this saved time and cost.

He said both plants would initially supply materials for LBS Bina’s internal projects.

“When the Nilai plant begins to operate at full capacity, we hope to supply our products to government and other private housing projects,” he said.

Lim expressed hope that the government would provide more incentives to developers and contractors to ease their investment cost into IBS.

“We have also participated in three affordable housing projects and helped to nurture local industrialised housing talents,” he said, adding that it was also the first Chinese IBS company to sign a strategic alliance agreement with the Construction Industry Development Board.

Zuraida thanked the company for helping the government meet its target to build a million affordable homes in the next 10 years.

“We will also promote the use of IBS technology in our projects as this will allow the construction of quality homes faster at a cheaper cost,” she added. 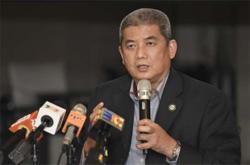