Fire and Rescue Department staff using a boat to go around flooded Kanowit.

The Disaster Relief Committee, under the state government, has issued an alert of bad weather during this tail-end of the landas season.

The landas in Sarawak, which is the equivalent to the monsoon season in peninsular Malaysia, brings heavy rain.

The latest updates stated that seven locations were hit by floods.

SK Sungai Paloh in Selangau was under two metres of floodwaters while SK Nanga Kuab in Ulu Mukah was under 1.8m. The other five locations flooded were in Kanowit district.

“There were no evacuations as yet but all longhouse residents have been told to be alert and ready to be evacuated if the floods worsen.

“The schools are empty as the boarders and staff are away for the Chinese New Year holidays,” said the update.

All relevant agencies in Selangau and Kanowit, such as the Resident’s Office, District Office, Fire and Rescue Department, Public Works Department, Civil Defence Unit, Drainage and Irrigation Department, police, local councils, Meteorological Department and others have been updated and put on alert as well.

Apart from central Sarawak, other parts of the state have fairly good weather. 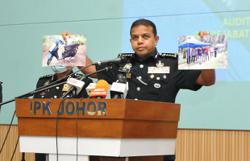