PETALING Street took on a carnival-like atmosphere when two lion dance troupes made their way through the popular tourist spot to greet shop owners and visitors ahead of the Chinese New Year celebration.

Locals who were eating at popular breakfast joints were surprised to see the lion and dragon dances, together with the God of Prosperity and characters from Journey to the West who came walking on stilts. Tourists and locals stopping in their tracks to watch a dragon dance.

The group began their procession from the Kuan Ti temple in Jalan Tun H.S. Lee before moving to Petaling Street or Chinatown, then to Jalan Hang Lekir, Jalan Sultan and back to the temple.

At the main entrance of the temple, visitors and tourists had lined both sides of the road to cheer the dance troupes on. 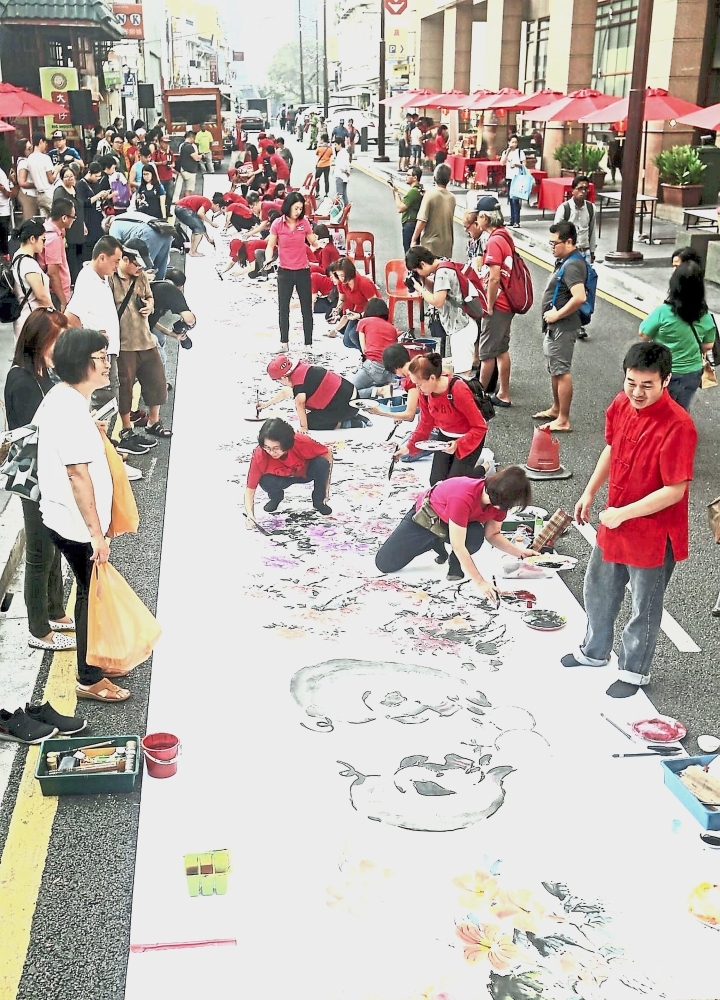 More than 30 artists came together to complete the 36m-long painting of peonies and pigs.

Students from the Confucian Private Secondary School made the scene merrier as they played diabolo and handed out mandarin oranges and red eggs to the public. 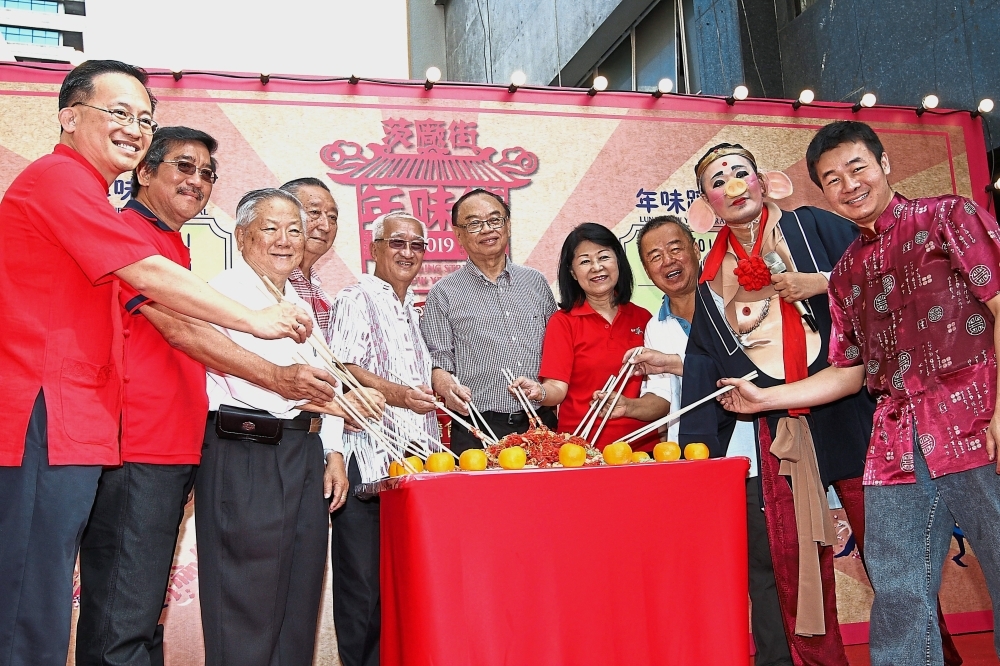 Fong (sixth from left) and Ng (fourth from right) with other organisers of the event tossing yee sang.

“Locals always have the impression that the street is occupied by foreign traders and we want to change that perception.

“There are still many popular local stalls here and they (the locals) need to come and see for themselves,” said Ng. Characters from Journey to the West walking on stilts.

She added that there was a need to preserve the heritage and legacy of Petaling Street to ensure that the younger generation will not forget its history. “Nowadays, only the older generation return here to shop while students and young working adults prefer to go to shopping centres instead,” he said. Karmen Chan selling dough dolls she designed herself at the festival.

Previously, the street market was only held for a day and due to time constraints, many missed it.

“This year, we have attracted the most number of visitors, especially at night and we are very pleased and with the response,” said Ng.

Chong and his friends also ensured there were activities throughout the day for both young and old to participate in such as Chinese opera, Teochew puppet show, opera make-up classes, calligraphy writing and Chinese art painting. 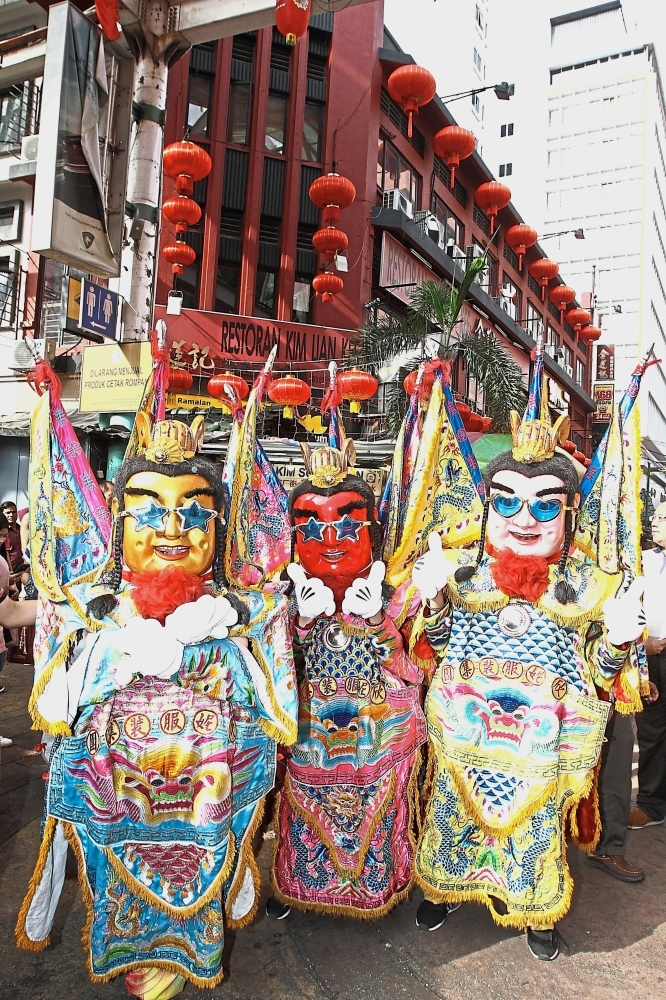 The San Tai Zi troupe making an appearance at the festival.

Earlier in the day, Bukit Bintang MP Fong Kui Lun launched the event with the organisers by tossing yee sang on stage.

The dish was later distributed to the public. 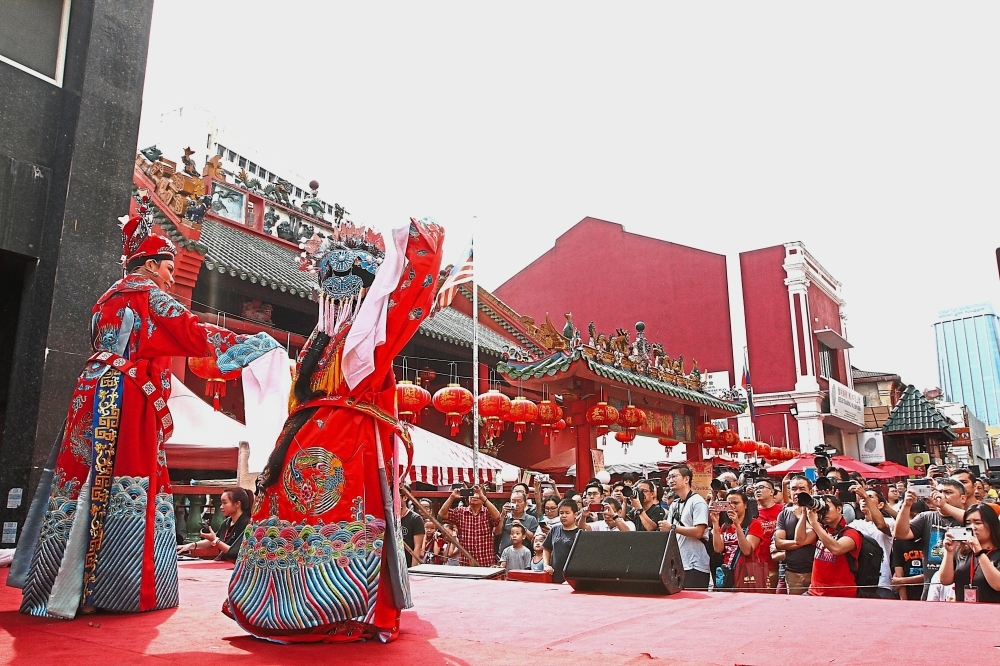 He also put the finishing touch to a 36m-long painting featuring hundreds of colourful peonies and two pigs.

The painting by 30 artists took two hours to complete.