AN ART exhibition featuring 150 artworks of local and international artists is being held at the Balik Pulau International Art Village in Penang until Jan 20.

Held for the first time here, the international art exchange, with a wildlife conservation theme of “We Art Together”, is organised by Artopia Education Trust and Penang Art District.

“We received a total of 238 paintings from 20 art institutions but due to space constraints at the gallery, only 150 artworks are exhibited,” said Dr Boey, who is one of the Artopia Education Trust trustees.

One of the art contributors is Chew Choon, 70, who was born in Penang but now resides in Singapore. He is also Singapore Wildlife Art Society chairman.

“I started drawing animals and things that I see in my kampung such as goats, buffaloes and the beautiful Malay costumes.

“Art is a tough journey as it takes a lot of hard work, perseverance and persistence. “I hope that artists from Penang and Singapore can meet for an international art exchange soon.

“Art has no boundaries and artists should make connections with each other more often,” said Chew, who has held group and solo exhibitions in England, Africa, France, Japan, China, Malaysia and Singapore.

After graduating from Nanyang Academy of Fine Arts in 1975, Chew focused on teaching art and drawing Malaysian subjects such as buffaloes and goats.

He started drawing elephants, antelopes and cheetahs after making his trip to Kenya in 1987.

The exhibition also features local artist Kirtanraw Subramanian who had just held his solo art exhibition at the USM Art Museum a few months ago.

The 24-year-old, who was born with autism, has been actively involved in the art industry for the past seven years.

His father Subramanian Bandiloo, 52, found out his son’s hidden talent as he loves to draw pencil sketches of ‘Power Rangers’ characters. 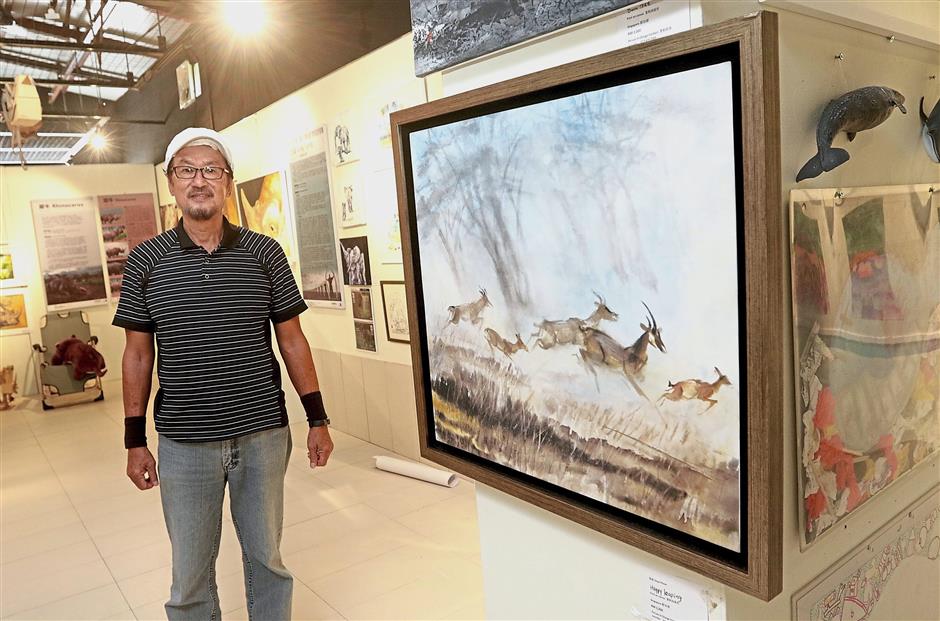 Chew started drawing elephants, antelopes and cheetahs after making his trip to Kenya in 1987.

“David had invited Kirtanraw to paint a few pillars at the entrance of this art village.

“My son has improved a lot since he started drawing. He is more confident now as his works are recognised and honoured.

“He has since focused less on his defectiveness and taken pride in his own artworks,” said Subramaniam.

Chief Minister Chow Kon Yeow, who officially launched the event, said the development of art and culture was an integral aspect of Penang 2030 to build a family-focused, green and smart state.

“The language of art is deciphered through the means of the artists’ creativity. It can awaken the people’s mind and our comprehension of the various issues affecting us in everyday life,” he said.

He commended the organisers for using art as a medium to emphasise the need for environmental protection and to advocate the importance of wildlife protection. Visitors checking out the facilities and artworks at the Balik Pulau International Art Village in Penang. The compound of the art village is adorned with cute sculptures of tapirs in conjunction with the Art On Wildlife Conservation International Art Exchange.

“Over the past 10 years, we have been actively building the art and cultural software and hardware in the state.

“More importantly, we advocate freedom so that Penang can be enriched by the diversities of the people,” Yeoh said.

According to Artopia Education Trust trustee Lee Khai, a 3.7ha art district project initiated by the state government is still under planning.

Lee, who is the Penang Art District adviser, hopes more platforms will be provided for art, artists and the public.

“We hope to provide more infrastructure for art which will benefit everyone as the facilities such as print services and wood-fired kiln are expensive for an individual to own them,” he said.

The exhibition is open daily from 11am to 5pm until Jan 20.