‘No transparency in degazettement exercise’

An aerial view of the proposed housing development that would involve the degazettement of 28.3ha of the Bukit Lagong Forest Reserve in Gombak.

PLANNING approval for a proposed housing project at Bukit Lagong, Gombak was given to Selangor State Development Corporation (PKNS) even before the proposal to degazette the forest reserve.

State Environment, Green Technology, Consumer and Non-Islamic Affairs Committee chairman Hee Loy Sian said PKNS was given the green light for the project in 2003 by the Selangor State Executive Council (MMKN) but it was not carried out.

Hee said the land was no longer suitable as a forest reserve as it was surrounded by housing developments, hence the decision to excise the 28.3ha area.

“The replacement land is also a forest owned by PKNS. It is located below Broga Hill.

“It is already a forested area and will be gazetted as forest reserve. The area is much larger than the one in Bukit Lagong

“This will also protect Broga Hill as a recreational area as it is famous with hikers,” he said in the state assembly yesterday.

Selayang Municipal Council (MPS), he said, in its Local Draft Plan (Replacement) 2030 designated the site in contention as a housing zone.

On Monday, StarMetro reported that there would be 30-day public hearing seeking feedback on a proposal to degazette part of the Bukit Lagong forest reserve for the project.

The Selangor Forestry Department placed a notice in major dailies on Nov 23 inviting stakeholders in the Gombak district to voice their objections to the proposal within 30 days.

The public hearing is in accordance with the Public Inquiry (Selangor) Rules 2014, as well as National Forestry Act (Adoption) Enactment 1985, which makes the exercise (placement of notice) compulsory before a forest reserve can be degazetted. 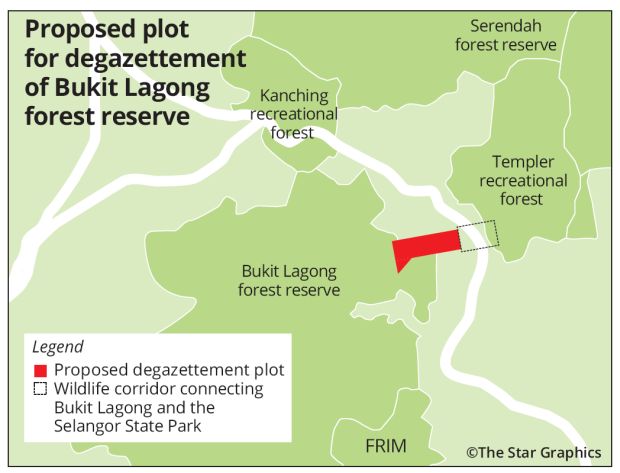 The move to degazette the forest, one of the last wildlife corridors, will jeopardise the movement of animals living in the area, environmental groups said.

Treat Every Environment Special (Trees), along with Malaysian Nature Society (MNS) and Global Environment Center (GEC) are questioning state authorities for wanting to degazette the forest.

MNS president Ahmad Ismail said the identified area was one of the last wildlife corridors connecting the forest reserve to the Kanching and Templer recreational forests, which made up part of the Selangor State Park.

“Breaking this link will cause the Bukit Lagong Forest Reserve to become an ‘island’ and the entire forest ecosystem will be doomed.

“Even the area’s microclimate will be affected, which will have a cascading effect on the forest’s biodiversity,” he said. Leela says NGOs and stakeholders should be well informed on any degazettement exercise.

Ahmad said any development in the forest could also affect more than 100 species of birds.

“The noise from the construction will be a major factor. Any trees cut down will jeopardise nesting sites.

“Additionally, it can affect flight paths of migratory birds,” he said.

Class 1 is the least severe in terms of terrain grading where slope angles are less than 15 degrees.

She said checks at MPS showed that the local draft plan did not indicate the land was part of the permanent forest reserve.

“This is very misleading and creates a misconception. Anyone looking at the draft plan will assume that the area was degazetted but this is not the case,” she said.

MNS senior advisor Tan Sri Dr Salleh Mohd Nor said the state authorities should not disturb gazetted forests for any type of development.

“There are other forested areas that are degraded which can be utilised, but not an area as strategic as Bukit Lagong.

“If there is a need for more housing, Selangor has many abandoned housing projects that should be seriously looked into before opening up more land.

“Why take the easy route to destroy a forest for selfish gains?” he said. 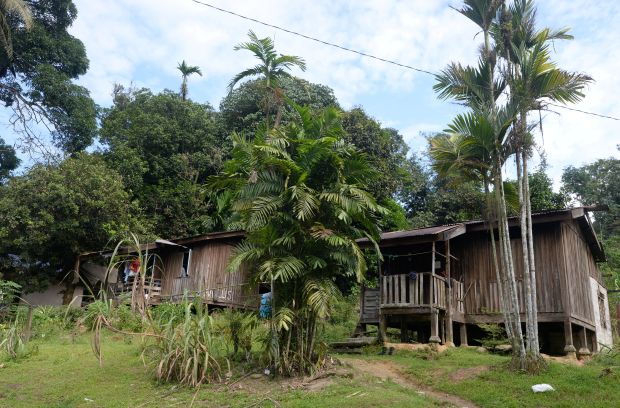 “The Bukit Lagong orang asli, who live close to the forest reserve’s boundary, rely heavily on forest resources for their sustenance and also for their income,” she said.

Pertubuhan Pelindung Khazanah Alam Malaysia (Peka) president Puan Sri Shariffa Sabrina Syed Akil said the proposed degazettement showed that the government was not interested in preserving the natural environment and was driven by an obsession to develop any piece of land that was commercially viable.

“Other groups and stakeholders have spoken out against this move and their reasons are very clear.

“What is their (authorities) motive in approving such a development at the expense of our natural environment?

“If the government is sincere, they should engage all stakeholders and NGOs instead of merely calling for a public hearing,” she said in a statement.