CHARITY goes beyond monetary donations for four Singaporeans involved in Rainbow of Life Forces (ROLF), a community initiative to give back to society.

Edmund Tay, Jonathan Lim, Rich Sng and Calvin Tan said they believe in ROLF’s mission to make a difference in the lives of the Grant-A-Wish Campaign beneficiaries.

Tay, an executive producer with Mediacorp, said ROLF gives benefactors a chance to meet their beneficiaries.

“Through this campaign we also give recipients what they want instead of what we think they need,” he added.

Like Tay, the other three donors who are entrepreneurs, want to contribute more than just their time and money; they are looking at influencing others within their circles to do the same.

Both Lim and Sng, who own Japan IPL Express, aim to encourage their staff to help those in need. 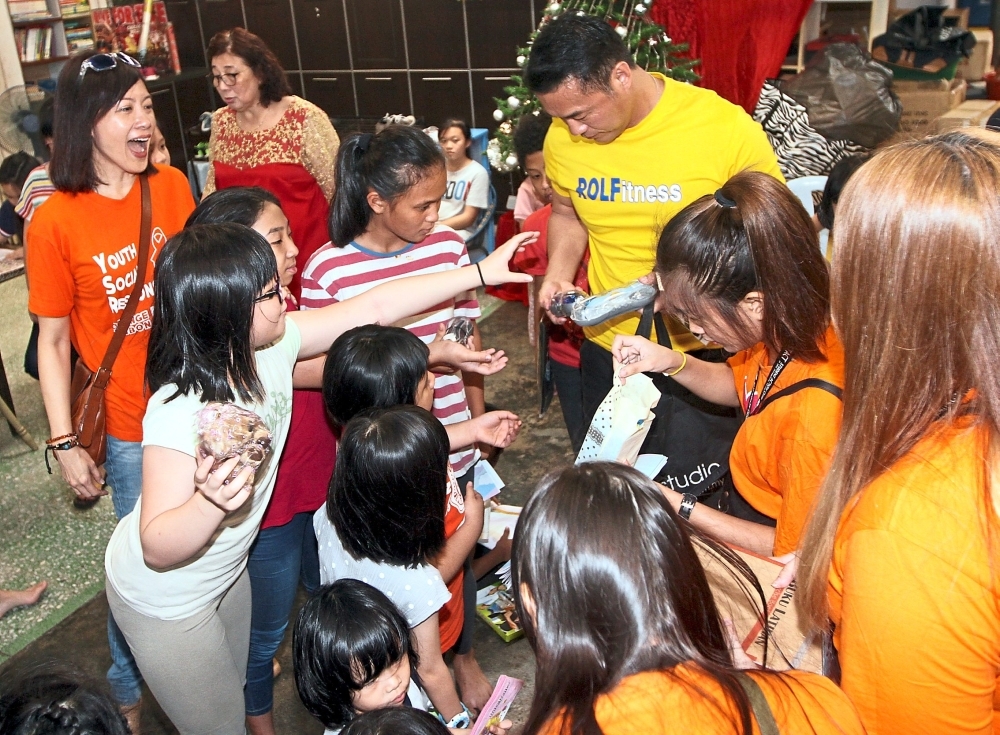 Children from the Good Samaritan Home looking at their gifts excitedly.

They want to give their employees a sense of purpose and make a difference.

“We are happy to be able to remove some obstacles for these young children,” said Sng when met at Good Samaritan Home during a ROLF event.

Tan, who owns Reel Spa Fishing Reel Servicing, said ROLF is a great platform to support the community. He uses social media to influence his followers to contribute to charity.

The donors were present to personally hand over the sponsored gifts at ROLF’s 10th Gold Ribbon Grant-A-Wish Campaign.

Students can also get involved through the ROLF Orange Ribbon Campaign and volunteer during events.

Two groups of students from INTI International University and Universiti Tunku Abdul Rahman (UTAR) were also at the Good Samaritan Home to volunteer their time.

ROLF founder Adelyn Lim said this year, the campaign will help 263 children from seven institutions in Kuala Lumpur and Johor. Adelyn says the campaign will help 263 children from seven homes in Kuala Lumpur and Johor this year.

ROLF gives donors a chance to meet the children and possibly offer them additional opportunities, including jobs later.

ROLF has granted 7,000 wishes of children in Malaysia, India and Nepal since its launch in 2009.

Donors are requested to register online or email the form to the organiser no later than Dec 14 to find out more about the recipients, the homes they are from as well as their wishes.

Almost all had asked for new school uniforms.

Adelyn said donors and the children will meet during handover ceremonies that will be organised in each home on Dec 22 and 23 in Kuala Lumpur, and Dec 29 in Johor.

Good Samaritan Home’s co-founder Y. M. Ong said the children welcomed the opportunity to interact with the donors and thank them personally.

“It is rare to see donors coming to meet the children and spending time with them,” she added.

A total of 25 school-going children from the home will receive new uniforms.