While a mock cheque of RM1.88mil was prepared, more was raised during the charity dinner, bringing the total amount to RM2mil. Holding the mock cheque are (from left) Pay Kaon, Pei Thiam, Sze Teck and Hospice Klang chairman Dr Michael Yoong.

A TOTAL of RM2mil was raised at the Thong Thye Siang Group (TTS) charity dinner 2018 in aid of Hospice Klang.

Held at the Klang Hokkien Association hall, the charity dinner themed “Because We Care” was held in conjunction with the group’s 35th anniversary.

Hospice Klang was set up in 1995 to provide free palliative care to those in need; a majority of the patients are suffering from cancer.

It relocated to Bandar Parklands in Klang in January after the centre was completed last December.

In his speech, Lim Pay Kaon of TTS said his company had donated RM230,000 for the construction of the new centre. 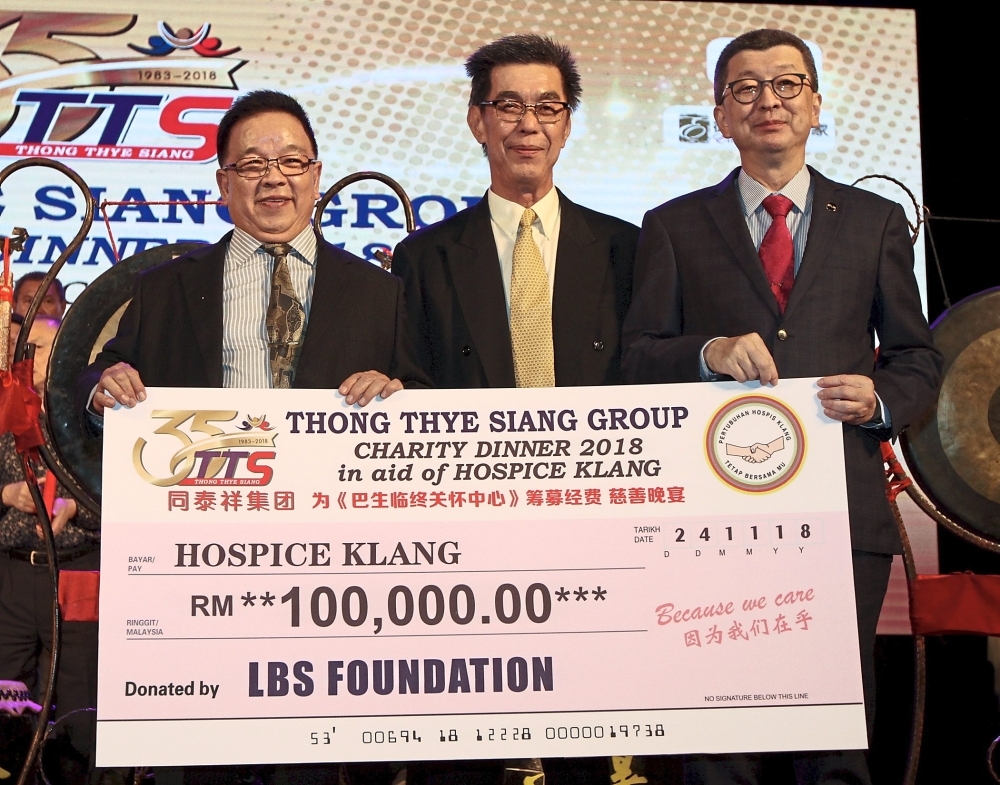 Hock San (right), through the LBS Foundation, donated RM100,000 towards the charity event. With him are Pay Kaon (left) and Sze Teck.

“Since 10 years ago, we have made it mandatory for the company to contribute to charity; every year, we donate RM30,000 to RM40,000 to Hospice Klang.

“The centre provides free palliative care services to terminally ill patients and needs around RM500,000 annually to operate. I urge corporations and associations to also contribute to those in need,” he said.

LBS Bina Bhd managing director Tan Sri Lim Hock San, who was the guest of honour, said the LBS Foundation, which encompasses the aspects of education, community, environment and health, provides aid to the needy.

As such, the foundation donated RM100,000 for the charity event.

The night started off with a 24-season drum performance by Kwang Hua High School students. There were also singing performances throughout the night.