OVER a year has passed since Penang was struck by two catastrophic storms in September and November but the tarred trail up the hill in Cherok To’kun Forest Reserve in Bukit Mertajam remains in a broken state.

During the current inter-monsoon period, hikers walking up the 3.6km trail are wary and have to keep their eyes on the exposed cliffs, which they fear may collapse any time.

Blue tarpaulin sheets used to cover the exposed cliffs have deteriorated, leaving only shreds of the sheets on the cliffs.

Part of the damaged drainage along the trail was also filled with rocks and sand. 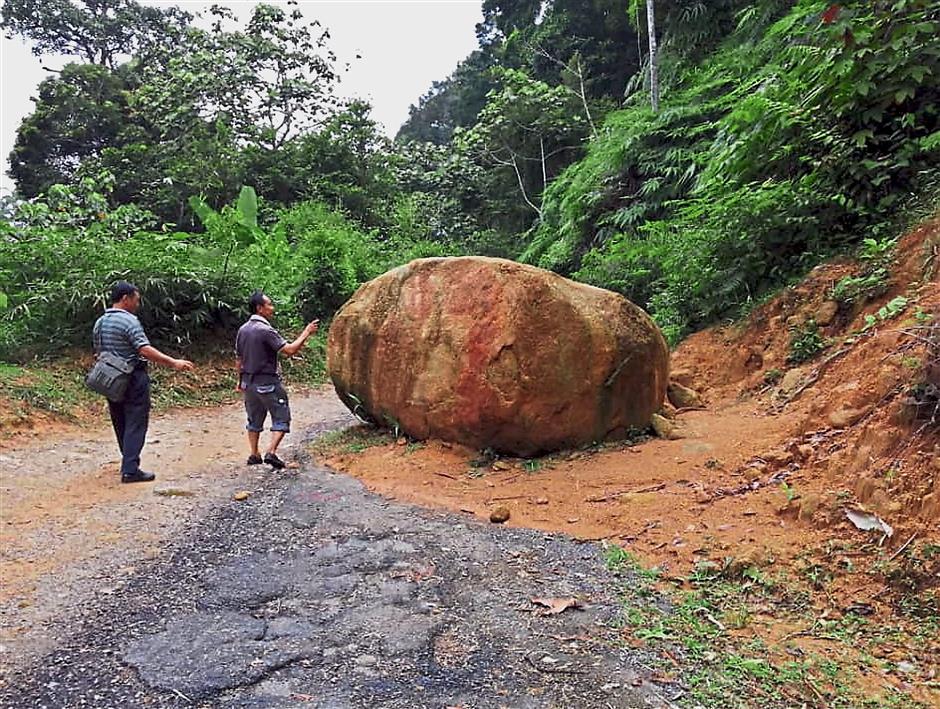 Hikers looking at the boulder still lying on the road. — pic courtesy of hikers

Large tree trunks which fell during the landslides can also be seen along the trail.

Meanwhile, a giant boulder weighing over 10 tonnes is still sitting on the trail near the peak.

Frequent hiker Anas Efendi Shafiee, 35, who walks up the trail several times weekly, said he noticed new signs of soil erosion each time after a downpour.

“This is among the main attractions in Seberang Prai and thousands of hikers come here weekly.

“It is worrying to see their safety at stake,” he said.

Primary school teacher Azam Shaari, 38, who was with his twin eight-year-old sons, recalled the trail’s beauty when he first started hiking years ago.

“There used to be monkeys on branches and clean water to collect from the streams. It was an ideal park for friends and families to come together and be with nature.

“The trail was beautiful. It was shady and cooling. Now, it is all muddy.

“I hope this place will be fixed up and remain a beautiful forest reserve for the younger generation to appreciate,” he said.

Some hikers also feared that they might lose their permission to access the trail with more complaints as the park had been declared closed before but reopened following demands from hikers.

A retired businessman, who wanted tobe known only as Ng, said hiking groups had been taking their own precautionary measures.

“We can’t complain more. If the authorities are unhappy, they may close down the park. 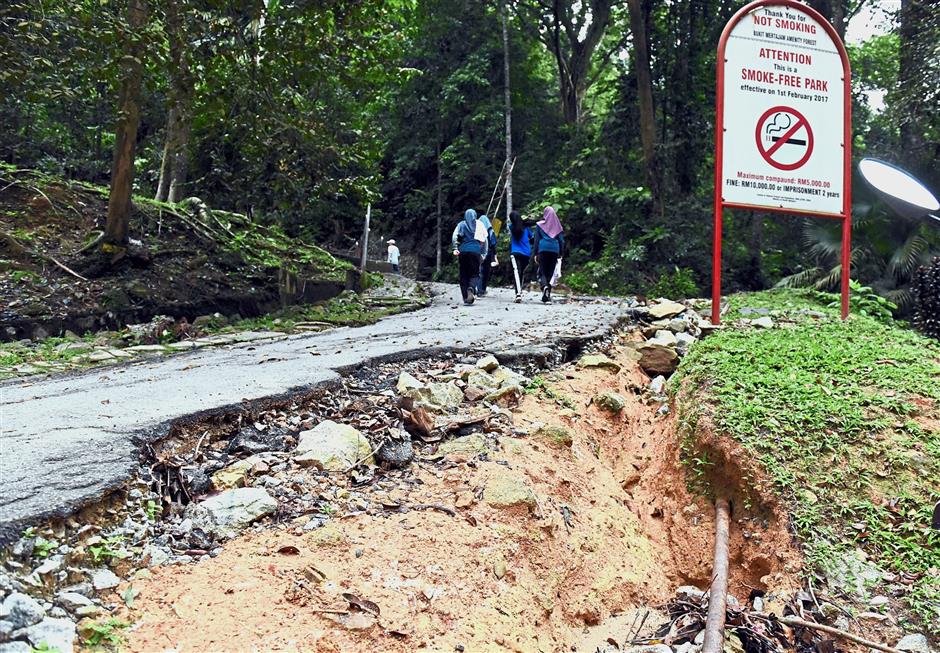 Part of the badly scarred road due to erosion.

“The big boulder rolling down the hill is a matter of sooner or later, and more trees will eventually come down when the soil beneath them are eroded by rainwater,” he said.

The road is maintained by Telekom Malaysia (TM) for its service vehicles to reach the station at the peak while repairing the slopes comes under the purview of the Public Works Department.

Peninsular Malaysia Forestry Department director-general Datuk Nor Akhirrudin Mahmud, in a visit to the park last year, reportedly said there were more than 50 trees with roots exposed after the November storm, adding that 53 landslide hotspots were detected in the forest reserve.

Machang Bubok assemblyman Lee Khai Loon said he had raised the matter during the recent state assembly sitting and a RM17mil budget was required to repair the road and hillslope.

“We need to get TM to do that but they have no allocation yet.

“I have asked the state government to urge TM to quickly start the project.

“Meanwhile, the Forestry Department has conducted some repairs and strengthened the hillslope,” said Lee.

The 148ha forest reserve was gazetted in the 1980s by the former Barisan Nasional state government, and the late Berapit assemblyman Song Ban Kheng had requested that 15ha be turned into the Taman Rimba Bukit Mertajam recreational park for hiking and various outdoor activities.