Guests helping themselves to a sumptuous buffet dinner at the Deepavali Open House 2018 in Little India, Penang.

THE Malaysian Indian Chamber of Commerce and Industry (MICCI) Penang brought the Festival of Lights to life with a grand traditional celebration in Little India.

Shoppers and traders were treated to barathanatyam, peacock and folk dances.

Betty Chew, the wife of Finance Minister Lim Guan Eng, joined in the kolam drawing to mark the beginning of the recent celebration.

He said RM550,000 more was spent on lighting up the area, adding that the state would continue to assist traders in Little India with the help of MICCI.

MICCI president Datuk N. Gobalakrishnan thanked the state for its support and allocation for Little India. 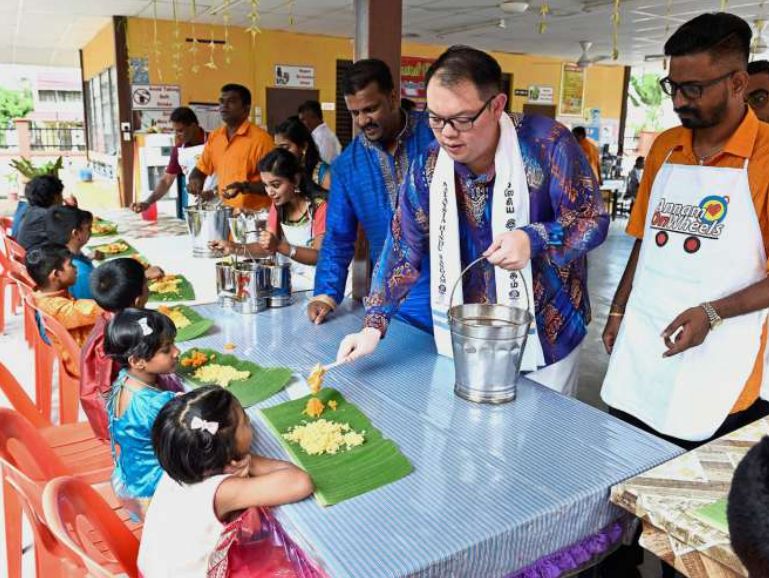 More than 600 people attended the event where lucky draw prizes were also given away for winners.

Meanwhile, the festive mood was also evident at SJKT Azad in Jalan Kebun Bunga where a Deepavali open house was held for 20 families and 50 children from Shan Children’s Home and Ramakrishna Ashrama Penang.

The guests had a great time during the Deepavali event held by Malaysia Hindu Sangam (MHS) Bukit Bendera Council.

They feasted on traditional banana leaf rice before joining a demonstration on muruku making and mehendi drawing.

The children also performed traditional dances during the celebration at the school’s hall recently.

Council’s chairman Viveka Nayagan A. Tharman said this was the first time they were organising a Deepavali open house.

“We are happy to see everyone coming together for the celebration.

“Hopefully, this will be an annual affair and we intend to make it bigger next year,” he said.

Also present at the festive event was Pulau Tikus assemblyman Chris Lee, who gave out red packets, goodie bags and hampers to the families and children.