Sharing the health benefits of qigong

MIRI: Qigong practitioners should make a greater effort to promote its health benefits to all.

Qiqong Association of Malaysia president Woo Fook Chiew said the efficacy of the ancient Chinese form of physical exercise had been scientifically proven.

“We practitioners of qigong know that it is not only good for the physical aspects of our body but also promotes mental well-being.

“People of all races, ages and gender have testified that it has brought many benefits to them. Qiqong practitioners demonstrating some moves at the gathering.

“Qigong associations in Malaysia must actively promote this form of exercise to community associations, youth bodies, schools and neighbourhoods.

“Qigong is for all,” Woo said in his address to the 1,000 or so practitioners present.

He said aside from its positive effect on bones, joints and muscles, qigong can help those who practise it regularly attain mental calmness.

Miri Qiqong Association chairman Hii Teck Yun said it was an honour to host the national-level gathering in Miri.

“This event enables practitioners to share information that will be mutually benefical,” he added. 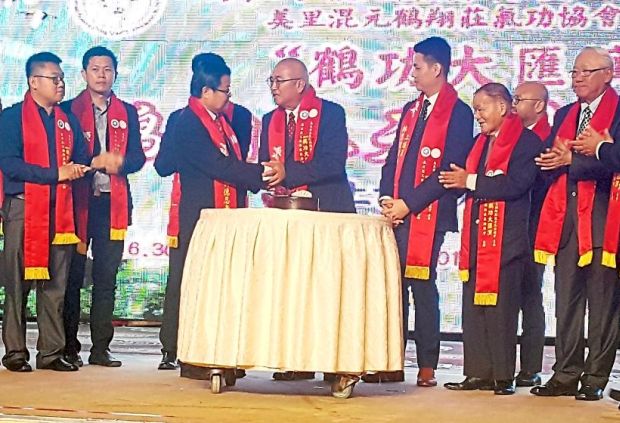 Hii (third from left) greeting Yii on stage at the Qigong Asociation of Malaysia’s annual gathering in Miri.

Guest-of-honour Senator Alan Ling said those present were the best advertisements of the many benefits of qigong.

“We can see here that there are quite a number of very senior people who are healthy, active and look youthful,” he said.