Fishermen cleaning the red jellyfish for sale in Pulau Bruit.

SIBU: While fishermen in Pulau Bruit, about four hours drive from here, are enjoying bountiful harvest of red jellyfish, locals on the other hand are enjoying umai obor-obor (red jellyfish sushi).

Red jellyfish are plentiful at this time of the year, which is the monsoon period. According to a local, Jemain Bedihi, umai obor-obor is one of the most loved traditional dishes of the people in the state.

“It is not only found in Pulau Bruit but also other places such as Kuching, Sri Aman, Sibu, Sarikei, Mukah, Bintulu and Miri where red jellyfish are available,” he said.

The only difference is that people in Pulau Bruit can buy red jellyfish cheaply as they are available in abundance in the market and are also fresh from the sea.

Jemain said it was not difficult to make red jellyfish sushi. The ingredients consist of a plate of the jellyfish, two big onions, three red onions, half inch of ginger, 10 limes, three chili, 10 cili padi, two spoonful of chili souce, one teaspoon of oyster souce, coarse sugar and monosodium glutamate (amount depend in one’e liking). The ingredients are then mixed and soak for two hours before serving.

“It tastes delicious when served with rice,” he suggested. 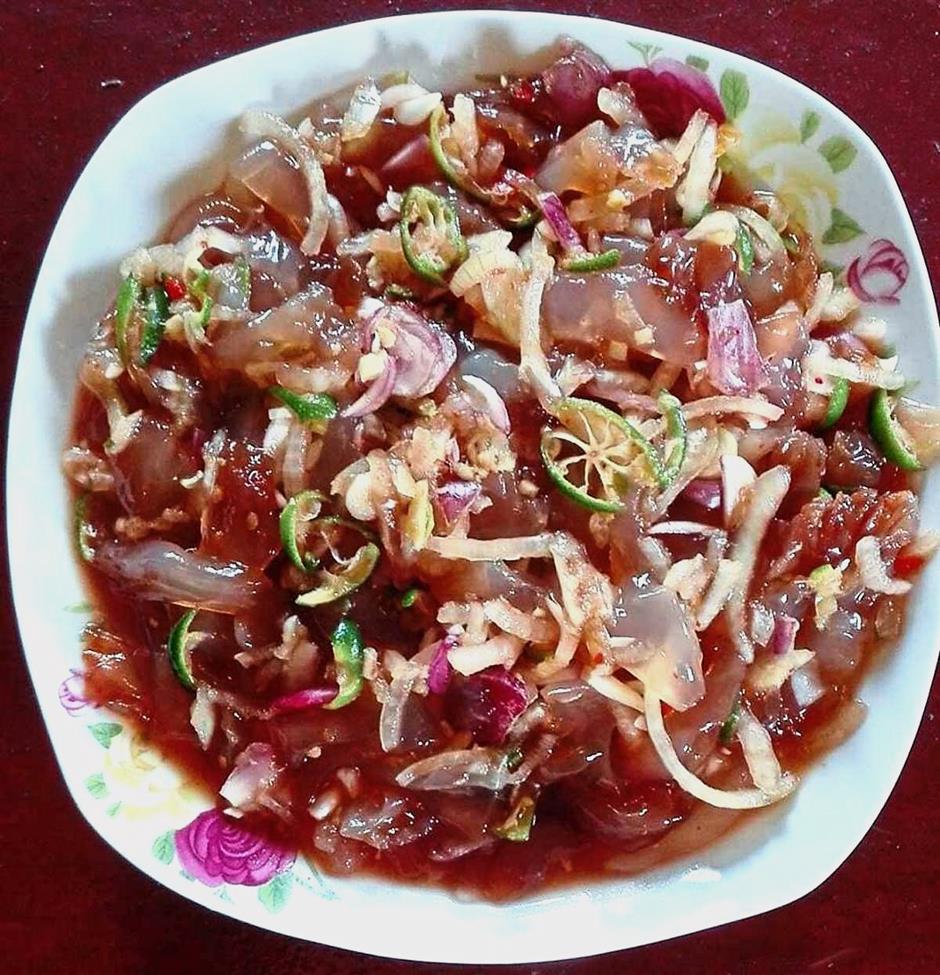 “We can catch the most red jellyfish this time of the year and we can easily make a few hundred ringgit from our sales of the fish,” he added.

The money earned, he said was enough for their daily expenses and also for their children’s education.

Zamri said it was not only fishermen who profit in the jellyfish season but also the youths who have an extra source of income.

“During this period, we work longer hours going out to the sea in big groups early in the morning. “We will sell most of our catch to a processing factory here,” he said. We sell our catch to the factory at between RM10 to RM18 per kg. For the larger jellyfish, we dispose them at RM10 each and RM3 for smaller ones,” he said.

At the factory in Pulau Bruit and Kampung Bertanak, workers would clean the jellyfish, weigh and pack them according to categories for sale in towns like Sibu for RM25 to RM30 a kg.