A pedestrian walking past an intoxicated man sleeping on the pavement in Petaling Jaya.

KUALA LUMPUR tops the list with the highest number of shops selling compounded hard liquor (CHL) in the country, based on a research by the Malaysian Anti-Cheap Liquor Movement (MACLM).

MACLM president P. David Marshel said the data was based on five years of research and surveys carried out by its members, who have been monitoring outlets selling liquor nationwide.

“Our research, carried out in 35 local authorities nationwide, includes getting information on the number of liquor shops in a residential area, easy access to the shop, random purchase surveys, sending in underage-looking buyers to purchase liquor and even talking to illegal manufacturers of the beverage,’’ he said.

“Our findings showed a pattern. Where there is a high concentration of Malaysians and foreigners, especially from Bangladesh and Myanmar, living in an area, you will also find dozens of liquor shops in the vicinity and that’s the legal ones,’’ he said.

During his interviews with patrons at the hotspots, David said he found that almost everyone who bought the beverages believed it was not hazardous to health.

“Overworked and stressed, liquor is their cheap but deadly way out. But what’s sad is that they actually believe that it’s good for them and they don’t realise or maybe refuse to accept the fact it is actually killing them slowly,’’ he said.

The movement is also lobbying for the Government to invest in research on factors that contribute to alcoholism and the impact of the beverage on society, especially the youth.

According to a 2016 World Health Organisation report, Malaysians spent more than RM2bil on alcohol annually and is the tenth largest alcohol consumer in the world. 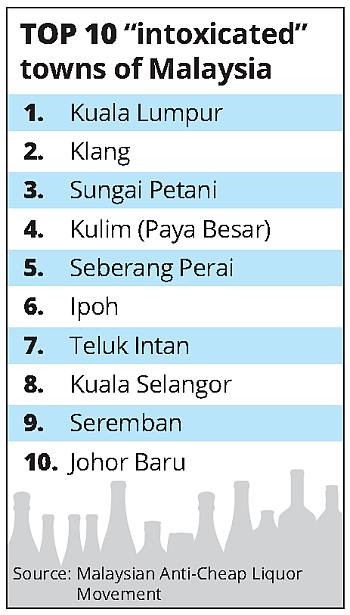 The previous Government, bowing to pressure from non-governmental organisations that were against CHL, gazetted new laws on alcohol purchase and consumption on May 27, 2016.

“We pushed for seven demands and I am proud to say that after securing 500,000 signatures, we got the Government to listen to us and eventually the Health Ministry made amendments to Regulation 361 of the Food Regulation Act (on general standards for alcoholic beverages).

“It made it mandatory for alcohol retailers to display notices stating that ‘drinking alcohol is harmful to health’ along with signs indicating that they will not sell to those below 21 (the previous age limit was 18).

“Former Health Minister Datuk Seri Dr S. Subramaniam had promised to ensure that manufactures and retailers would toe the line, but he went back on his word,’’ David claimed.

The regulation, which came into effect only on Dec 1 last year, to give manufacturers and retailers time to adapt and make the necessary changes to their products, was postponed indefinitely two days before it was to start.

StarMetro reported that the Health Ministry’s Food Safety and Quality Division decided to put the brakes on enforcement via an internal memo to the state health department heads until further notice.

Another crucial aspect of the new amendment was that it also required CHL to be sold in glass bottles with a minimum 700ml content. That means that alcohol sold in small bottles is banned.

This will increase tax on each CHL bottle, which will now cost between RM40 and RM50, compared to previously when liquor could be purchased for as low as RM5. Those caught breaking the law face fines up to RM10,000 or two years jail.

Back to square one

“Almost one year has passed since the postponement and we have yet to hear anything from the Health Ministry on the matter,’’ David said.

He said members nationwide gave feedback that retailers were not adhering to the law and were openly selling CHL.

David’s observation is supported by the Brickfields Community Society (BCS) – a coalition of 40 NGOs including residents’ associations, schools and places of worship.

“It is a social menace that is reflected in the increasing number of outlets selling liquor in the city.

“Too many outlets are given licence to sell liquor and it is easily available at all hours.

“In the wake of the recent alcohol poisoning tragedy, the Government must contain this problem,’’ he said.

In many instances, CHL is put on display at the cashier area. Some shops have the necessary signage warning of the dangers of alcohol consumption but still sold CHL in small bottles, which was a clear violation of the law. 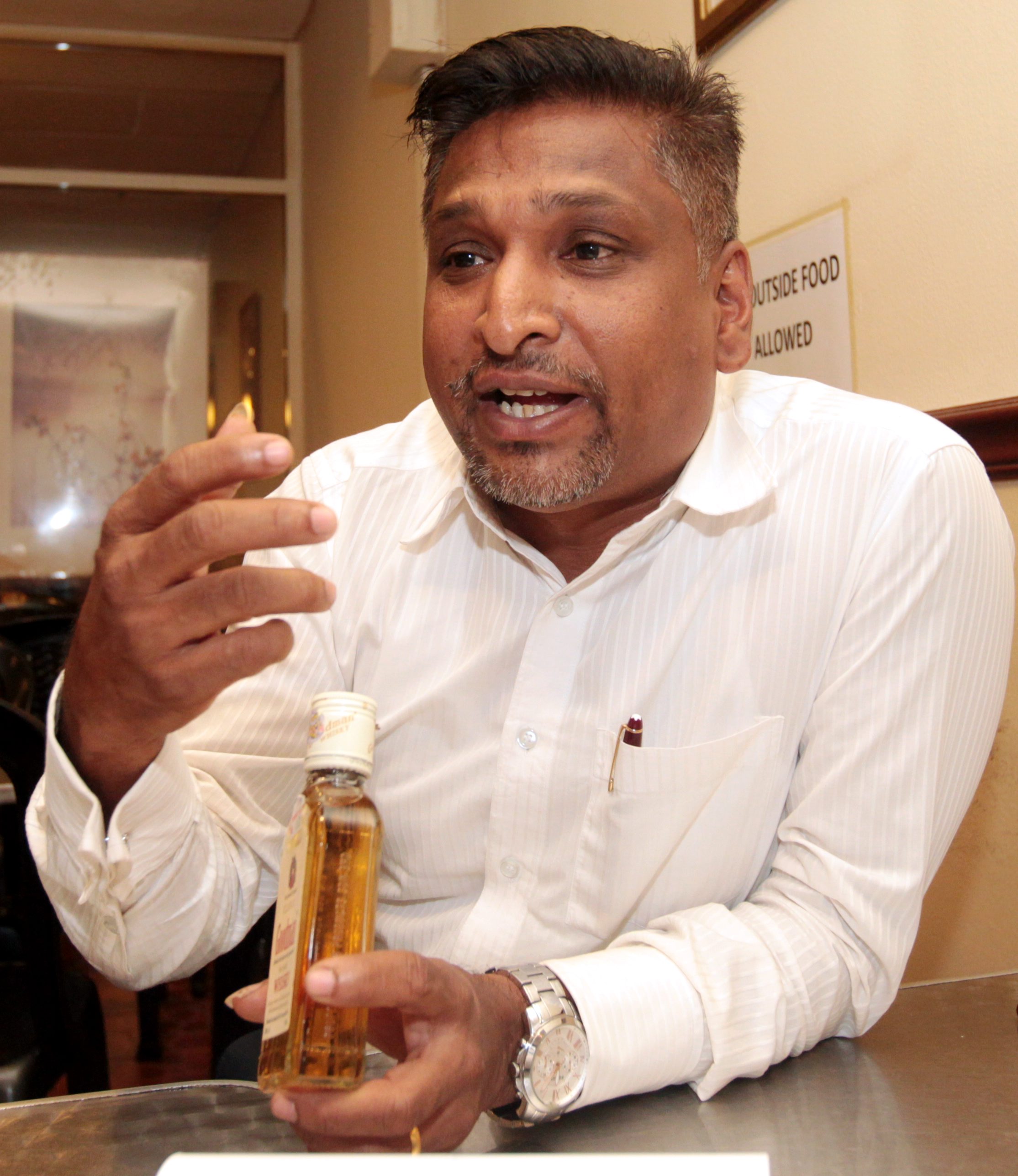 StarMetro sent in underage decoys to see if CHL was readily sold to youngsters and found that it was relatively easy to buy liquor at sundry shops, retail marts, hypermarkets and Chinese medicine shops, without anyone questioning the young ones.

When asked about this discrepancy, proprietors said it was no longer an issue. In fact a Chinese medicine shop owner said, “Syarikat sudah settle dengan ministry, sekarang boleh jual! (The manufacturer already settled with the ministry, now can sell)”.

We also discovered that liquor was not only sold in dedicated liquor shops, but also in sundry shops, supermarkets and hypermarkets and even coffeeshops.

In townships such as Brickfields; United Garden, Taman Sentosa and OUG, off Jalan Kelang Lama; and Petaling Jaya Old Town; shops selling liquor are within a 200m radius of schools.

The shops continue to sell liquor after 9pm, which is in contravention of the local authority by-laws.

David, who is also Seberang Prai municipal councillor, agrees but maintains that empowering the local authorities would be far more effective. He said they want to push for the government to allow local authorities to take action.

“After so many people died from alcohol poisoning recently, only now do we hear of the police taking action, before this, they never got involved when it came to liquor.

“It has always been under the jurisdiction of Customs, and local authorities shied away from enforcing unless there is a joint operation,’’ he said.

David felt it was time the local authorities are given the mandate to enforce liquor laws, saying the easy availability of alcohol from commercial outlets, particularly for youths, has been identified as one of the main causes for the problem.

At a recent board meeting, he said councillors voted to reduce liquor licences by 70%.

Currently, there are 160 outlets in Seberang Prai with licence to sell liquor, and the authorities want to reduce it to 50, while introducing stringent guidelines on the sale and display of CHL.

“We also want to limit liquor sales to only selected outlets. While we have no problem with supermarkets selling it, as they close at 10pm, it’s the 24-hour outlets that we are worried about,’’ he said.

There was also concern that the Excise Act 1976 is silent on the proximity of liquor shops to schools and residents.

“There is no clear indication on the proximity of a liquor shop to residential areas and schools, merely the use of the word berdekatan (nearby),’’ he said, adding that the loophole made it easy for liquor shops to operate without getting caught.

“We want to correct that by making it clear on the proximity issue at the local authority level,’’ he said, adding that MPSP was waiting for the state government’s endorsement of the new policy.