The float carrying dancing and singing performers making its way along Chulia Street during the parade.

THE young and elderly made their way with much merriment around the Ng Fook Thong Cantonese Districts Association and along Chulia Street, Penang, carrying lanterns to celebrate the Mid-Autumn Festival.

Following the 1km parade of 500 lantern-carrying participants was a beautifully decorated float with performers dancing and singing to entertain the crowd.

The event was co-organised for the first time by the association and the Chulia Street Village Security and Development Committee (JKKK).

It brought together those from St Joseph’s Home, the Salvation Army Boys Home, Kawan Drop-in Centre and the Lighthouse Drop-in Centre, as well as locals and tourists.

JKKK chairman Datuk Cheah Phee Guan said they had celebrated the festival, also known as the Lantern Festival, since 2014 but on a smaller scale. Chow holding a platter of mooncakes during the celebration together with association president Leong (left), JKKK chairman Cheah (in wheelchair) and other association members.

“We usually had about 200 to 250 participants and our venue was usually smaller.

“This time we turned it into a bigger event by joining forces with the association with over 600 participants.

He said they prepared goodie bags filled with mooncakes and other delights for the participants.

“The event will also create an interest in the Mid-Autumn Festival that many may not know about,” he added. 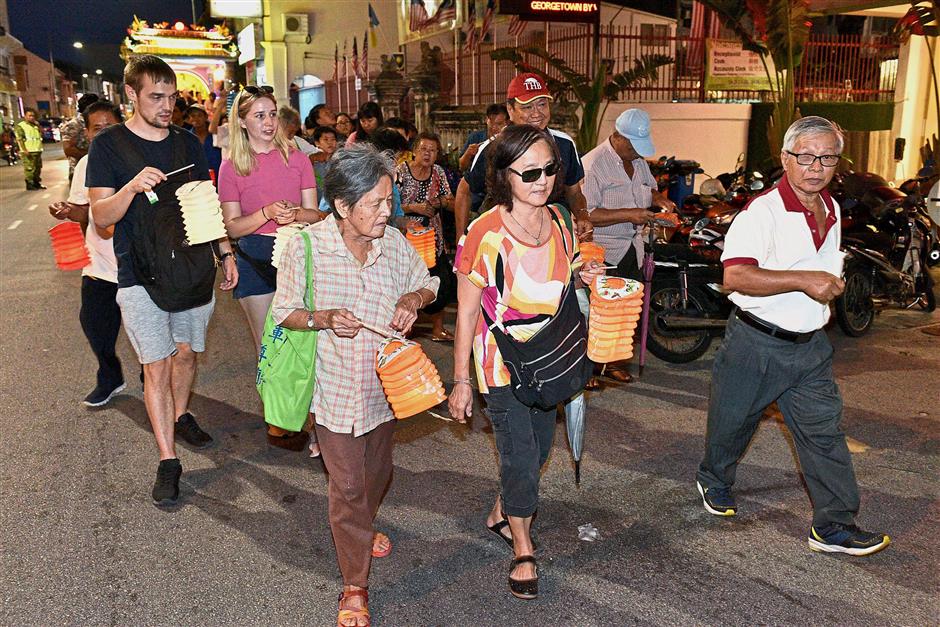 Locals and tourists joining the 1km walk along Chulia Street with traditional lanterns in hand.

“We hope to continue with this event from now on,” he said in his speech.

Guest-of-honour Chief Minister Chow Kon Yeow said he was happy to be part of the celebrations and praised the event and organisers for bringing everyone together.

“It has become an annual event and is a great way of promoting the Chinese culture especially since this is a popular tourist area.

“It is also a great way to bring the community together,” he said in his speech before leading the parade with a lantern in hand.