Sivanesan (right) speaking with blood donors during the launching ceremony of QUIP health campaign in Ipoh. (Below) Sivanesan having his blood pressure checked at the event.

PRIVATE hospitals must have a way for patients to return unused medication to pharmacies, says state Health Committee chairman A. Sivanesan.

He said a similar programme was carried out in government hospitals and it received encouraging response so far.

However, people might not freely return what was unused as they paid for their medication from private hospitals, he added.

Sivanesan suggested that hospital administrators reimburse a certain percentage of the payment when patients return medication that could still be used.

“It is easier for patients visiting government hospitals to give back their medicine as they usually have a routine monthly check-up. Perak exco A. Sivanesan having his blood pressure checked during the launching ceremony of Quest International University Public Health Awareness Campaign 2018 in Ipoh

“But in private hospitals, those who paid for their medicine are not going to return unused ones unless there is some form of incentive.

“I will speak to the representatives of private hospitals in the state to see how we can carry out such a programme,” he said after launching the Quest International University Perak (QUIP) health campaign programme at Ipoh Parade.

The programme with the theme “Quality Use of Medicine – Rational Use and Proper Storage of Medicines” was organised by QUIP’s Pharmacy Students Society to educate the public on maximising effects of medicine. Sivanesan (third from left) launching the QUIP health campaign in Ipoh. With him are Dr Raman (second from right) and Dr Mathews (left).

Sivanesan lauded QUIP for organising the event and encouraged more private universities to carry out programmes that benefited the public.

He was impressed that a number of people pledged to donate their organs at the event.

He said more people must become organ donors without looking at the religious perspective.

“In an emergency or when organs are being transplanted in an operation, nobody looks at race or religion,” he added.

Sivanesan said the World Health Organisation defined quality use of medicine as patients receiving “medications appropriate to their clinical needs, in doses that meet their own individual requirements, for an adequate period of time, and at lowest cost to them and their community”.

He said there was lack of awareness among the general public about properly storing medicine.

“Some are not aware about how or where to store the medicine to maintain its efficiency and quality.

“As such, the health campaign by QUIP is the perfect avenue to educate the public on proper usage and storage of medicine,” he added.

Dr Raman reiterated the university’s commitment to working in tandem with the state’s aspirations.

“Today, we are here to create awareness of the good and bad of medicine.

“We aspire to work with the state government to bring healthcare in Perak to the next level of excellence by educating the public,” he added.

Dr Mathews added that chemicals helped heal a specific illness, but if misused, it could cause death.

Citing the example of paracetomol, he said, if misused, the medicine could cause liver failure.

“It is common for family and friends to sometimes share medicine, but this is not good practice.

“Because one person’s medicine is another person’s poison,” he added.

“We must always be aware of the temperature and humidity in the air when storing medicine,” he added. 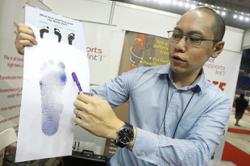