Having a voice in a new country

Towle delivering his welcoming remarks during the stakeholders’ meeting on ‘Solidarity With Refugees: Finding Solutions Together’ at The Northam All Suites Hotel Penang in Jalan Sultan Ahmad Shah, Penang.

SPEAKING in front of a large audience can be a terrifying experience for most people, more so if you’re a teenage refugee who has come a long way from home.

But that did not stop Astana Bibi, an 18-year-old Rohingya refugee, from going up on stage to givea speech during a refugee stakeholders’ meeting in Penang.

Astana, who started her speech in English and spoke later in Bahasa Malaysia, showed poise and confidence as she shared her life as a refugee before 100 people.

Astana said she studied at the Jaringan Rohingya Education Centre (JREC) where she received her primary education and iscurrently working with a local NGO to assist others in need.

“I had the opportunity of studying and not everyone is as lucky as I am.

“Not all get the chance to study and work with an NGO.

“My parents never stopped me from studying and were always supportive of me. They did their best to send me to school.

“Most of us get to study only up to Standard Six and not untilsecondary school but we are thankful nevertheless,” she said in her speech during the event at The Northam All Suites Hotel Penang in Jalan Sultan Ahmad Shah, George Town, recently. 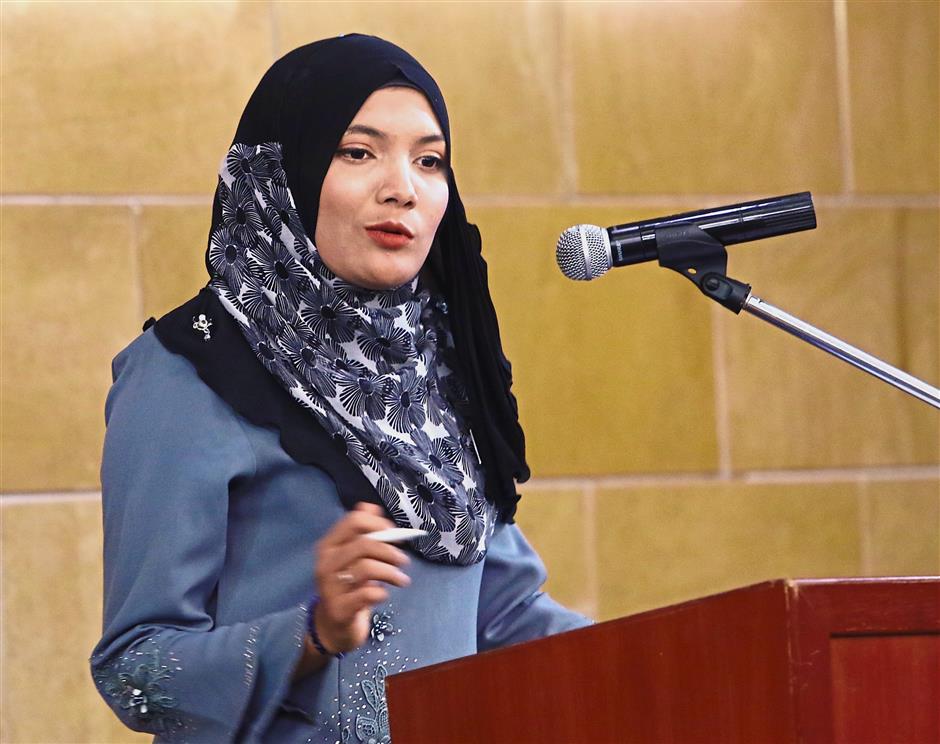 Not all refugees get the chance to study and work with an NGO like I do, says Astana.

Astana, who was born in Malaysia, said she hoped that refugee children are able to have access to education at secondary and university levels in the future.

“I didn’t get to study until secondary level but I hope that in future, the other children will be able to do so.

“I feel lucky that although I am a woman, my parents are supportive of me to gain basic knowledge.

“Even though I’m a refugee, I also have a right to have anambition,” she added.

The inaugural refugeestakeholders’ meeting was held by the United Nations High Commissioner for Refugees (UNHCR), the UN Refugee Agency, to discuss issues of protection and solutions for refugees living in the northern region of Malaysia.

In a press conference later, UNHCR representative Richard Towle said Astana is proof of their work to empower the young group of refugees in the country.

“It is quite challenging for an 18-year-old woman to stand up in front of us.

“That is what we should be aiming for, to empower people like her to be respected and be self-respecting in community.

“We do that through education, health and giving people the right dignity of work,” he said.

He also stressed the importance of having the refugees registered in order to be able to regulate them and also avoid any exploitation of them by irresponsible parties.

“UNHCR has worked hard for the past three years to ensure the refugees are able to live in the country legally even on a temporary basis.

“We are happy that the Education Ministry has now started to work with us to register and regulate some of the Rohingya private learning centres.

“This will help to ensure that there are safe, good quality places for children to get an education,” he said.

Towle also added that the new Pakatan Harapan government had also expressed intention to legalise refugees in Malaysia and give them the right to work.

As of end of August this year, there are 161,140 refugees and asylum-seekers registered with UNHCR in Malaysia.