A spectacle to behold in Ipoh

Sultan Nazrin Shah placing a ‘keris’ into a sheath triggering a chain of fireworks and lighting up of the Sukma torch.

THE rain was relentless, but the 15,000-strong crowd remained undeterred as they braved the rain to be part of the opening ceremony of the 19th Malaysia Games (Sukma) on Tuesday night.

Armed with raincoats, umbrellas and jackets, people from all walks of life and creed thronged the Perak Stadium hours before the 8pm scheduled opening time.

Although the ceremony was delayed because of the rain, the stadium was packed as the boisterous crowd waited patiently in the damp weather.

As the lights dimmed and music played signifying the start of the ceremony, the change in the atmosphere was apparent.

Excited, the crowd cheered and erupted in applause. Students dancing in formation with LED lamps in their hands, as part of the Indera Sakti opening performance.— Photos: RONNIE CHIN and SAIFUL BAHRI/The Star

The ceremony began with the singing of the national anthem and Perak state song, followed by the march past of all participating contingents, led by Sarawak and followed by Kedah, Kelantan, Melaka, Negri Sembilan, Pahang, Perlis, Penang, Sabah, Selangor, Terengganu, Federal Territory, Johor, Brunei and Perak.

As part of the launch gimmick, Sultan Nazrin placed a keris (traditional Malay dagger) into a sheath, triggering a chain of fireworks which led to the lighting of the torch of the championship in the shape of a keris, to loud cheers by the spectators. Donning the state flag colours of yellow, black and white, Perak athletes waving to the crowd during the march past.

The countdown for the ceremony featured a brief fireworks display and kick-started a series of colourful and captivating performances at 9.30pm.

After the games’ theme song Wow! Kita Hebat (Wow, We are Great) was performed, some 700 participants took to the stage with the opening presentation, titled Indera Sakti, consisting of a series of cultural performances by all ethnic groups in the country.

The highlight of the night’s show was none other than the drone light show, where 250 drones were deployed mid-air in the stadium, displaying the Sukma logo, the national and state flags including Perak football team the Bos Gaurus’ logo in 3D, much to the delight of the crowd.

Apart from the spectators at the stadium, tens of thousands of people watched the live telecast of the biennial games’ opening ceremony via several giant screens outside the arena and the live broadcast on RTM1.

In his opening speech, Syed Saddiq called on athletes to demand excellence from themselves by aiming high and becoming world champions.

“I want all of you to prove that you can be as great as Datuk Lee Chong Wei with the spirit of wanting to succeed. 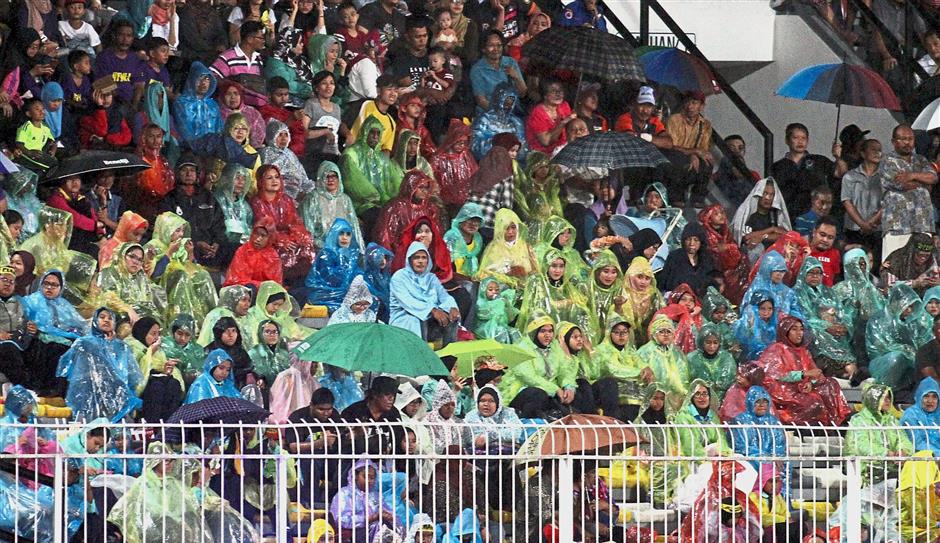 Some of the spectators in raincoats watching the opening ceremony of the 19th Sukma Games at Perak Stadium.

“Today you are representing your state; in the near future, you will bring the name of Malaysia to a greater arena,” he said, adding that Sukma was an important platform to produce more talented athletes who would represent the country on the international stage.

“Sukma is able to unite Malaysians with the love and spirit of sportsmanship, celebrating our similarities and strengths.

“Let us encourage the Malaysia Boleh spirit,” he said, adding that he was proud of the commitment shown by the Perak state government in hosting the games.

Syed Saddiq also called on Malaysians to throw support behind Malaysian sports and our homegrown athletes, as support was important for national sports to advance to the next level.

“Sports is a very effective unity agent that can bring together a nation,” he added.

Meanwhile, Ahmad Faizal welcomed all participating contingents to the state and called on them to take the opportunity to enjoy Perak’s hospitality, including tourist destinations, various food and attractions.

“We hope all of you will bring back unforgettable memories and experience when you head back to your home states,” he said.

This is the second time Perak is playing host to Sukma. 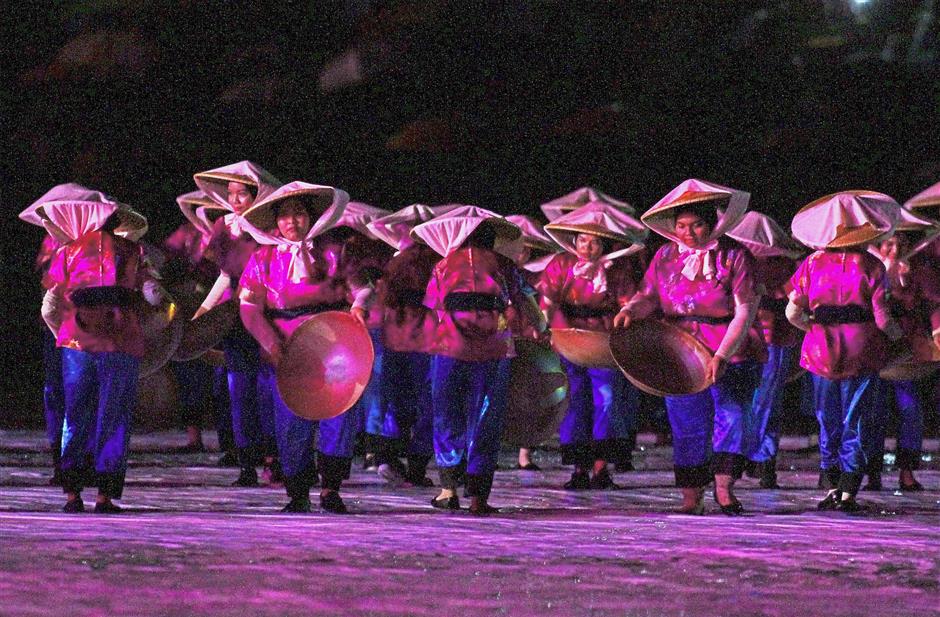 A colourful performance depicting the era of tin mining during the opening ceremony.

It hosted the games in 1994 during its fifth edition.

The games is taking place until Sept 22 across 39 venues and 12 districts throughout the state; with 427 gold medals up for grabs in 29 sporting events.

About 11,000 athletes and officials from 14 state contingents were expected to converge on Perak for the games this time.