THE installation of a new set of traffic lights at the Jalan Damansara and Jalan Wan Kadir 3 intersection has caused additional grief and confusion for motorists who frequently use that road.

“I usually use Jalan Damansara to go home, and it had always been free-flowing traffic at the stretch underneath the Taman Tun Dr Ismail MRT Station,” said Abdul Rahman, 40.

“One or two weeks ago, I nearly met with an accident because I hadn’t noticed that traffic lights had been installed at that intersection.

“It seems as if the traffic lights were installed overnight with no notice from the authorities that it would be in operation,” he said.

CH Tan, a similarly disgruntled motorist, feels the traffic lights have contributed to traffic congestion that spills over onto the Sprint Highway.

“The new traffic lights serve only those heading towards Glomac Damansara. The rest of us have to suffer just to allow a handful of cars to make the turn at that junction. 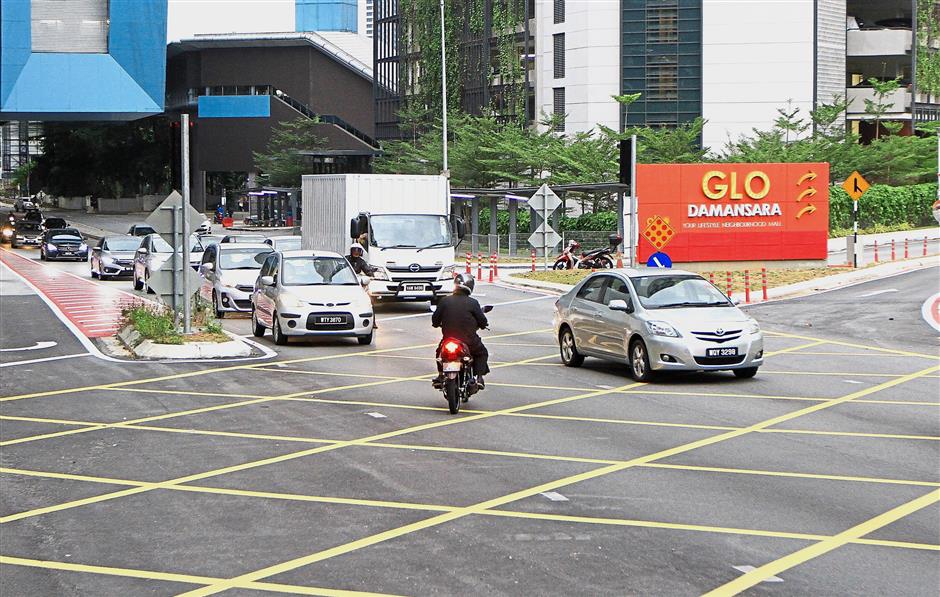 A motorcyclist is seen here attempting to negotiate a right turn towards Glomac Damansara while navigating the oncoming traffic. Some motorists are unaware that the traffic lights are in operations and accidentally run through the red lights.

“It’s really unnecessary to have something that serves so few users,” said the 31-year-old.

The traffic lights along that stretch of Jalan Damansara, which straddles the border of Kuala Lumpur and Petaling Jaya, were installed by Kuala Lumpur City Hall (DBKL).

One set allows vehicles coming from the Sprint Highway direction to turn right onto Jalan Wan Kadir 3 and head towards TTDI Plaza and TTDI Market.

The other set allows those coming from Damansara-Puchong Expressway (LDP) direction to turn right towards Glomac Damansara.

“The authorities should do away with both sets of traffic lights because they break the existing traffic flow,” said Taman Tun Dr Ismail (TTDI) Residents Association vice-chairman Clinton Ang.

“The majority of TTDI residents and RA committee members do not want and do not like having the traffic lights there.” 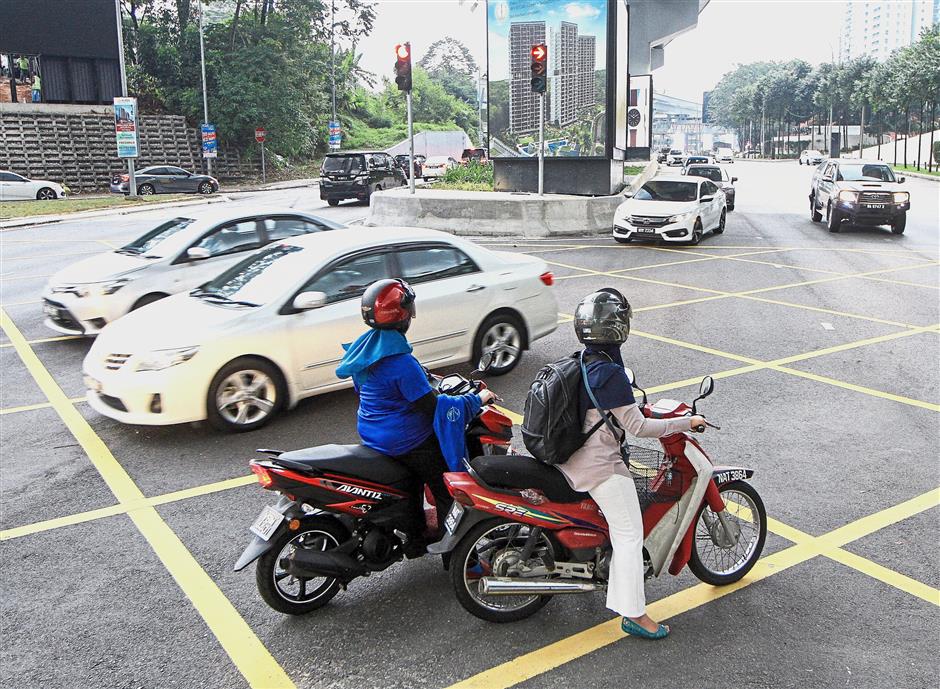 Two motorcyclists are seen here attempting to negotiate a right turn towards TTDI Plaza and TTDI Market. Some motorists are unaware that the traffic lights are in operations and accidentally run through the red lights.

Ang himself was stuck along the Jalan Damansara stretch for 45 minutes one night, and felt that the jam was partly due to the traffic lights.

“The authorities should study whether the system alleviates traffic or disrupts flow. They shouldn’t install something that only serves a small community at the expense of the majority.

“If the authorities are running the traffic lights on a trial basis, they should do it with measurable data and using CCTV footage to evaluate the need for the system,” said Ang.

While residents in the SS20 neighbourhood are not immediately affected as they use other routes to get home, SS20 Rukun Tetangga chairman Eileen Thong said the traffic lights should be removed as they hinder the free-flowing traffic along Jalan Damansara. 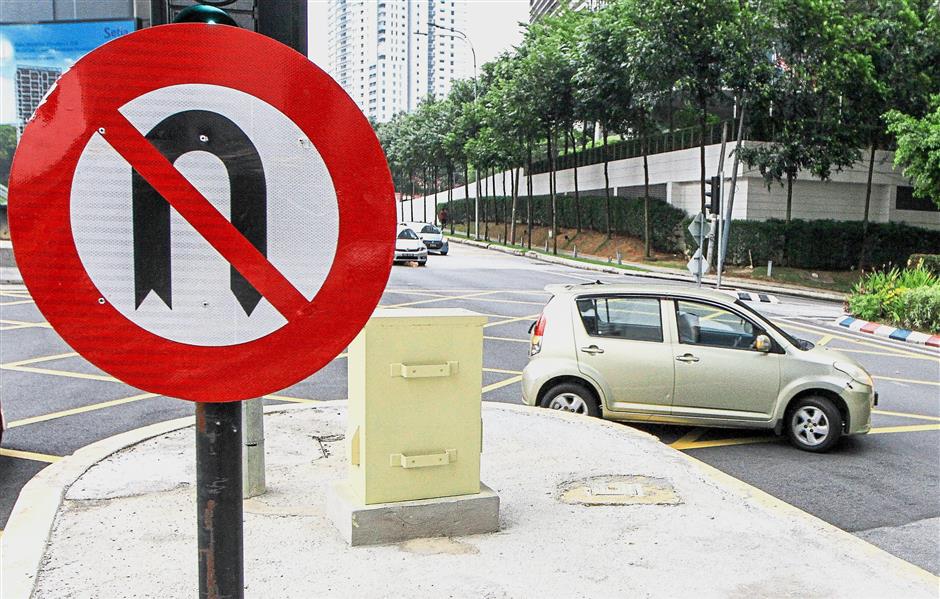 A motorist is seen here attempting a U-turn at the Jalan Damansara - Jalan Wan Kadir 3 intersection, despite the no U-turn signs on both sides of the road.

“We gave approval for the traffic lights after a study by DBKL showed that there was justification to add another right turn for vehicles coming from LDP direction to turn right towards Glomac Damansara,” said Abd Hamid.

“The construction included several units of traffic lights, a yellow box and CCTV.

Abd Hamid said that back in 2007, a set of traffic lights were installed at the same intersection to allow vehicles coming from Sprint Highway direction to turn right onto Jalan Wan Kadir 3 and head towards TTDI Plaza and TTDI Market.

“The traffic lights were temporarily shut in 2011 to facilitate MRT construction works, but were later reinstated by MRT’s contractors after the project was completed,” he said.

“In the meantime, some new developments took place around that area and Glomac Bhd submitted a request for an additional set of traffic lights.

“DBKL did a study to assess whether there was a need to add another right turn. The study included factors such as impact on evening peak hour traffic and distance to make the most viable approach.” 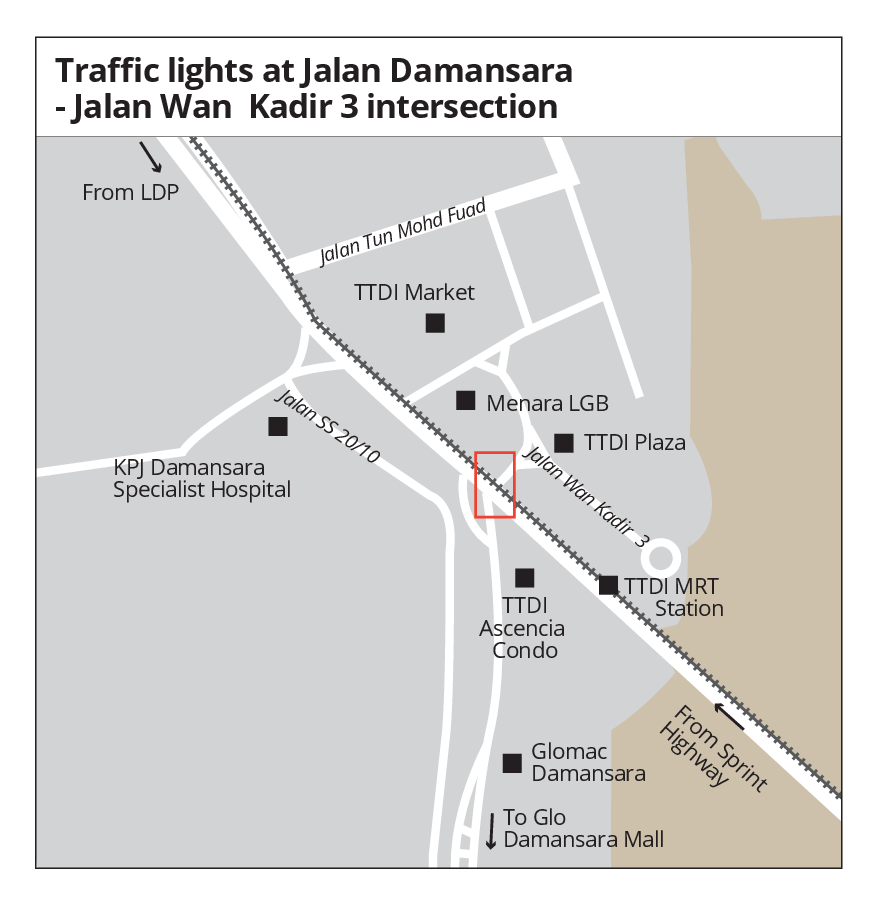 Abd Hamid said the traffic lights to allow the right turn towards Glomac Damansara was on a three-month trial basis ending Oct 31 to facilitate synchronisation and adjustment of its timing.

“The traffic light’s timing is dynamic and fluctuates according to the time of the day,” he said.

“It can be set to allow a longer green light time for straight-moving traffic along Jalan Damansara to allow more vehicles to pass during evening peak hour traffic.”

Abd Hamid said no problems or traffic backlog were reported when the developer ran a simulation of the newly-installed traffic lights in June.

“Traffic lights function to regulate traffic, manage conflict points and reduce accidents,” he stressed, adding that they were not meant to add delay to a motorist’s journey.

“In cases where motorists sneak U-turns at junctions that they are not allowed to, these people are creating risks for other road users.”

When contacted, Glomac Damansara said it had taken note of the matter and would issue a statement on it soon.