In her keynote address at marketing and advertising consultancy Zubedy (M) Sdn Bhd’s #EmpowerSomethingNice forum, Marina said that stereotyping of gender roles was harmful to both men and women.

“What makes it worse is that the world is changing and some gender roles have not.

“For example, the global economy is now a knowledge economy, and this suits women better because it does not rely on brawn, and relies instead on detailed meticulousness which women are good at.

“While men still have the highest paying jobs, there are also many who are still stuck in difficult lower paying jobs. Marina giving her keynote address at the forum.

“This is partly because they are not going to university in greater numbers like women, and do not have the qualifications for better paying jobs. It is those with current knowledge that have the power, and this works to the advantage of women,” she said.

Marina added that the shifting of gender roles was causing friction.

“Women are now their own income earners, highly educated and able to fend for themselves and their family.

“Sometimes, women earn more than their husbands and many men find this hard to accept, leading to crisis of male confidence,” she said.

The solution, she said, was for husband and wife to treat each other as equal partners.

“The burden of the home and caring for children has to be equally divided between the two.

“Each should be able to pursue their own opportunities and realise their own potential. It demands greater respect of each other’s talents and strengths between a couple.

“This cannot be done overnight and needs to start from young. Sons and daughters must be treated as equals and gender stereotypes must be discouraged. This must then be reinforced in schools,” Marina explained.

“We cannot change this world without the participation of men, and while many men agree with this, the tendency is to place the burden of negotiation and compromise on women.

“If we want to see a more just and equal world, men must recognise that they will have to give way for women to be empowered.

“They need to make room for women at the decision-making table – in politics, in the boardroom, at home,” Marina added.

Meanwhile, during a talk on career at the forum, petroleum engineer Dr Jeyanthi Ramasamy advised women not to be afraid to voice out opinions in the workplace. “If you want to take charge of a particular project, say it. Do not wait for it to be offered – the most they can say is no,” she said.

Rosehaida Ab Rahman who was formerly with Malaysia Airports Holdings Bhd and Petronas ICT Sdn Bhd, felt there was a bias in perception that women could not do the job as well as men.

“There is not enough effort to scout around for talent among women professionals,” she said.

Held annually, the campaign starting on Aug 31, runs from National Day to Malaysia Day, and is aimed at promoting unity among Malaysians via do-good initiatives. 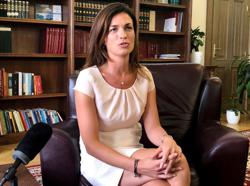