Offerings, such as this paper representation of wines and treatment products, were mostly imported from Fujian in China.

THE price of paper paraphernalia is likely to go up following the winding up of the Hungry Ghost Festival because of the shortage of raw materials and imported waste paper by paper manufacturers.

The possible price increase is pressured by higher cost in raw materials brought about by tighter control on imported waste paper in China.

“Since last year, China began taking a more proactive approach in tackling pollution problems, as well as regulating environmental laws in the country.

“Some of the measures taken included the crack down on factories that do not follow the new environmental requirements. A worker laying out and folding coloured paper at Lee’s factory.

“Many factories have been hit with fines and even closure. This has made a great impact on China’s manufacturing sector, including the pulp and paper industry,” he said.

Lee, 52, who is the managing director of Weng Fatt Industry (M) Sdn Bhd, a family business specialising in making various paper products for prayers for over 50 years, said local manufacturers have problems getting raw materials from China.

“As factories are being scrutinised and shut down for failing to meet the new requirements, paper manufacturers that are mainly from Fujian in China are having trouble sourcing for raw materials, such as waste paper and colour to maximise production.

“It is not that they have no orders, but their production can only operate for three or four days a week because of various shortages. 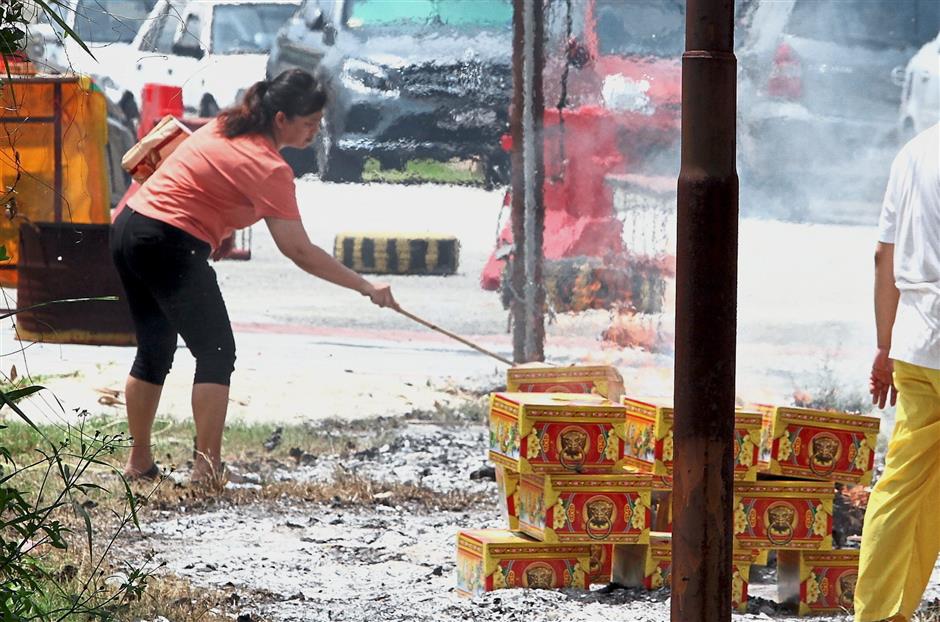 Paper paraphernalia have been in demand as believers prepare for the Hungry Ghost Festival prayers.

“This has resulted in late and missed orders, higher costs and eventually, increased prices of papers,” he said.

Lee said he has been importing his paper materials from Taiwan instead of China to reduce the impact of the shortages.

However, his recent orders was arriving late, raising concerns that the situation in the mainland was putting a toll on the paper industry supply chain worldwide.

“My usual order, which takes two months to arrive from Taiwan, has dragged to four months.

“Since I stocked up on some raw materials before this, my production is not badly affected and I can meet the market demand. Paper representation of gold and silver, and also hell notes were some of the hot items on sale as believers prepare for the Hungry Ghost Festival prayers. — Photos: RONNIE CHIN/The Star

“Also, my prices have remained the same despite the economic slowdown,” he said.

However, Lee noted that he would have no choice but to increase prices in the future if the raw material supply situation remained bleak.

Since the seventh month in the lunar calendar began on Aug 11, paper paraphernalia have been in demand as believers make preparations for the Hungry Ghost Festival prayers.

Also known as zhong yuan jie, the annual ceremony is an elaborate traditional affair for many Buddhists and Taoists nationwide.

Prayers with offerings, be they arranged modestly by families or on a grand scale by businesses, are expected to pick up now until the end of the month on Sept 9.

The burning of paper paraphernalia, such as gold and silver ingots, and hell notes have been an integral part of such prayers.

Although not as popular during the tomb-sweeping season of Qing Ming Festival, paper representations of items as trivial as clothes and shoes to big items like houses and buses were also burned as top-up for the “obsolete or broken” ones.

Tatt Poh Enterprise proprietor Tan Hock Chuan, who is the second generation selling a variety of Buddhist and Taoist prayer items in Pasir Pinji, said supplies of paper paraphernalia have been declining over the last few months.

“Many paper factories have been banned or shut down in China because of pollution and environmental concerns.

“So we have less manufacturers making the kind of paper and paper products we need and our stocks have been affected,” he said.

Tan, 44, said the price of these items were still under control for the moment, as some local suppliers were still able to distribute old stocks to retail shops like his.

Rather than increase his prices in tandem, he was keeping them low.

“Some of my stocks are recent and came with a revised price. But I also have some old stock, so I am able to sell at the old prices.

“But when the old stock is finished, I have to increase the price,” he said, adding that a price hike of about 30% for all paper-based paraphernalia was expected when the festival ends.

“About 80% of all paper offerings sold locally are imported, with the rest made by some local manufacturers.

“When there are policy changes that impinge on the manufacturers there, we will feel the effects here too,” she said.

Kelly noted that she was maintaining low prices at her store in order to stay in business.

“Right now, I am still selling the old stock from the bulk order I made for the Qing Ming Festival in March,” she said.

The 46-year-old added that so far, one of her suppliers said prices would increase next month onwards, following higher material costs and also the reintroduction of the Sales and Services Tax.

“What happens next, especially for the paper paraphernalia sector, would be a question mark for all, with a hindsight that prices are likely to increase.

“When the cost keeps increasing and customers buy less, we can only adjust our profit margin, which is already small, and let the business run its own course,” she added.