Clean up for visitors, eateries told

Rozali helping a hawker to put on an apron at the hawkers complex.

THE Seberang Prai Municipal Council (MPSP) has reminded food operators to keep their premises clean, especially in view of the Asia Pacific Masters Games (APMG) that will be held in Penang next month.

Council president Datuk Rozali Mohamud said an estimated 10,000 participants from 20 countries are expected for the event.

He said several areas in all districts in Seberang Prai have been identified for sporting events. 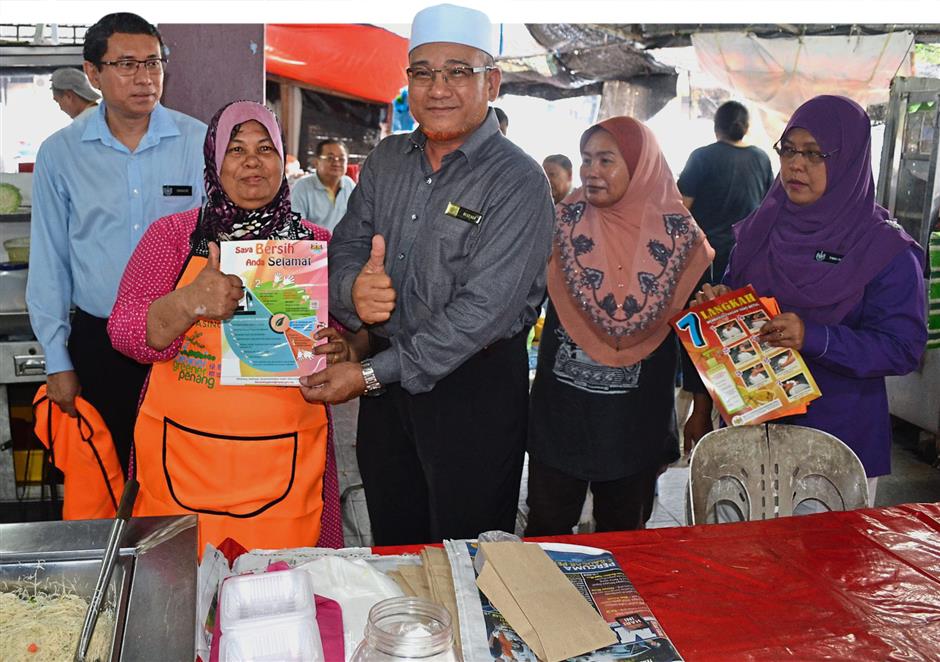 Rozali (middle) giving out cleanliness posters to hawkers after launching the cleanliness campaign at the hawkers complex in Taman Berjaya, Nibong Tebal.

“Among them are bowling in Megamal Pinang, Prai, weightlifting in Seberang Prai Arena, Seberang Jaya, golf in Sungai Jawi, and hockey in Kepala Batas.

“The participants will definitely go out to have food at the various food premises in Seberang Prai,” he told reporters after launching a cleanliness campaign at the hawkers complex in Taman Berjaya, Nibong Tebal recently.

APMG is the first multi-sports masters event in Asia and will be held in Penang from Sept 7 to 15.

Rozali also gave away 80 aprons to the food operators at the complex.

He urged the operators to maintain cleanliness and hygiene and ensure their premises are clean at all times.

It was reported that MPSP will hold a cleanliness campaign at eateries on the mainland until February next year.

Rozali reportedly said the first educational phase would be until Nov 30 while the second phase would involve enforcement.

He had said enforcers and health inspectors would first visit eateries and give advice if they see problems with cleanliness and food safety.

Premises found to be dirty during the educational phase of the campaign will be revisited to check on their progress.