Grand Imperial Group director Francis Ong (left) and Zhong (right) presenting his koi painting, valued at RM48,888 at the starting bid, to the bidder who won it for RM50,000.

A TOTAL of RM250,000 was donated to charity by the Grand Imperial Group at its charity event, which was held to mark the group’s 10th anniversary.

The lavish dinner at the Grand Imperial Royale Ballroom at Pinnacle Annexe, Bandar Sunway gave guests a chance to place generous bids in the charity auction.

A cheque of RM120,000 was donated to the main beneficiary, Yayasan Nanyang Press, a group that works towards multiple causes such as medical aid for the underprivileged, orphans, the elderly, single mothers and the visually impaired as well as disaster relief. Another RM100,000 was donated to Kwang Hua Private High School in Klang and RM30,000 to Hospice Klang, an organisation focused on providing palliative care to the community.

The highlight of the auction was a pair of ink wash paintings by renowned local artist Zhong Zheng Chuan, one of which he painted live on stage during the eight-course Chinese dinner. 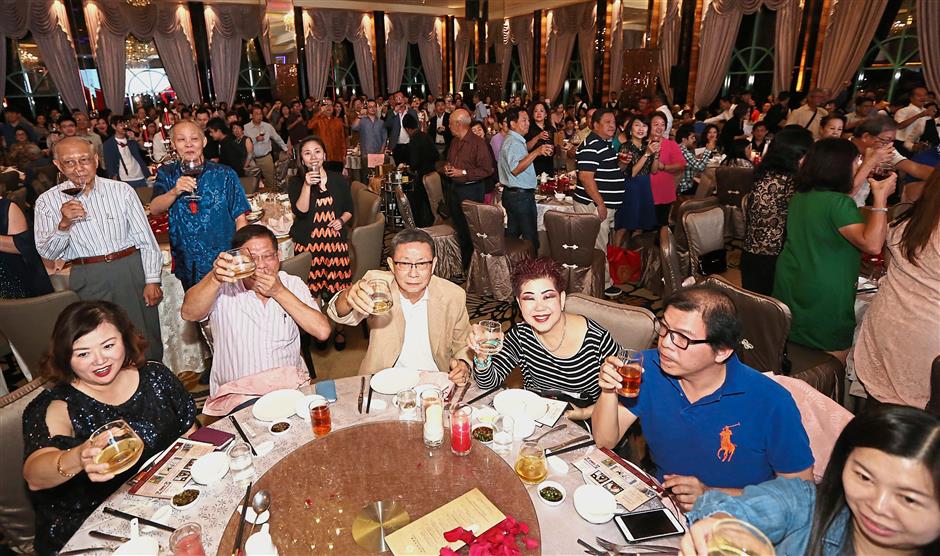 Guests raising a toast led by the Grand Imperial Group directors on stage.

Other items that were sold in the auction included a Grand Imperial Supreme Feast dinner package for a table of 10 worth RM26,888, two sponsored paintings, a bottle of limited-edition Scotch whisky and two bottles of limited-edition wines.

The guests savoured dishes such as lobster, roast suckling pig and roast London duck as well as free flow of Scotch while enjoying live performances of popular Cantonese songs.

The main entertainer of the night was local singer Stephanie Chan, popularly known as the “Malaysian Anita Mui” for her similar style of performance.