Diversions around project site in KL

MEASURES are in place to ensure the safety of road users during partial closures of Jalan Barat and Jalan Sultan Ismail in Kuala Lumpur starting today.

The closures are being implemented to facilitate the construction of the Tun Razak Exchange (TRX) development.

“Our traffic consultant will continuously inspect the site to ensure that everything is in place. Mohamed Razib said the closures and diversions are being put in place to facilitate construction of infrastructure for the development.

The slip road turning into Jalan Tun Razak from Jalan Sultan Ismail will be closed from today to Oct 31, 2019.

Vehicles heading towards that direction will need to make a U-turn at Jalan Perkasa while heavy vehicles will be redirected to Jalan Cochrane from Jalan Perkasa and back to Jalan Tun Razak.

Those heading to the Syarikat Mengurus Air Banjir & Terowong Sdn Bhd (SMART Co) office via Jalan Sultan Ismail will have to take the designated route which has a 2m height limit.

Meanwhile, two lanes of Jalan Barat will be closed starting today until Nov 18. Congestion seen near the construction site of the Tun Razak Exchange development in Kuala Lumpur.

An alternative route has been added to divert traffic from Jalan Barat to Jalan Imbi through Jalan Khoo Teik Kee.

Mohamed Razib said, according to statistics, 2,645 vehicles use the Kampung Pandan roundabout and Jalan Perkasa to go to Jalan Tun Razak, while 1,340 vehicles use Jalan Barat daily.

He added that the traffic diversions were necessary to make way for the construction of TRX’s infrastructure and the upgrade of existing roads to cater for the area’s future traffic requirements.

“It is also to make way for the opening of the first phase of the international financial district in the first quarter of next year,” he said.

The first phase includes the Exchange 106 and Menara Prudential. 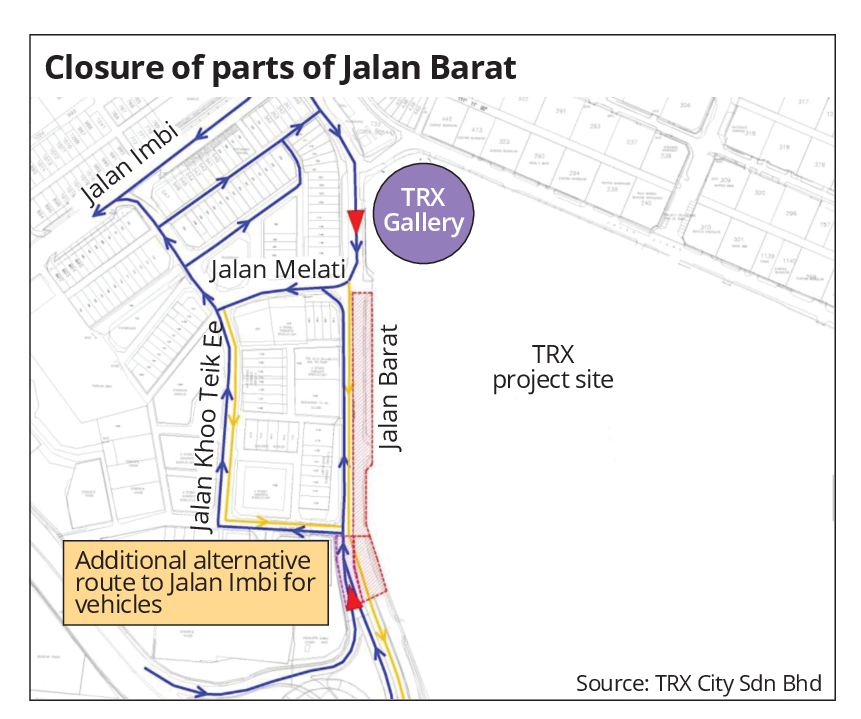 “The roads will be further upgraded and are expected to improve traffic,” he said.

Mohd Farid Sumali, a communications manager who uses Jalan Tun Razak to go to work, said the ongoing construction around the TRX project had narrowed the existing lanes.

“I am concerned about the safety of motorists due to equipment left by the side of the road.

“Recently, I saw an object lying in the middle of the rightmost lane of the road which could have caused an accident,” Mohd Farid said, urging the contractors to step up monitoring of site safety.

“Sometimes, I have to take an additional 20 minutes to get to Jalan Ampang from Jalan Tun Razak,” he said.