La Salle Sentul class of 1981 gave RM5,000 to the school for the purchase of new computers and tables for the students.

DRIVEN by a desire to give back to their alma mater, four groups of old boys from La Salle Sentul collectively donated RM32,000 to buy new equipment for their former school.

Their donations came within an hour after SMK La Salle Sentul principal Krishna Kumarie Naidu appealed for RM22,000 to buy new computers and tables for the students during her speech at the school’s 70th anniversary dinner.

“Our group decided on the spot to donate RM5,000 to our old school. The monetary commitments from each individual will be decided later,” said Mahendran Perimaloo, whose group from the class of 1981 occupied two tables at the dinner.

“Our group of between 25 and 30 makes it a point to meet regularly and we often do charity work, such as pooling funds to buy a computer for an underprivileged person.” The 52-year-old said his greatest memory of being a La Sallian was that the students were a muhibbah, multiracial group.

“I studied at La Salle Sentul from Year One to Form Three. I had to continue my education at a different place as the school didn’t have Form Four and Form Five classes then.

“My late father was among those who contributed to the building extension that was built after I left,” said Magandran.

In recognition of the La Sallian Brothers’ contributions, Magandran said LSSOBA planned to build the tallest monument in Asia of St John Baptist de La Salle – the founder of the Institute of Brothers of the Christian Schools and patron saint for teachers.

“The La Sallian Brothers nurtured students with basic knowledge, putting them through extra classes for free and giving those whose parents faced financial constraints the opportunity for an education.

“Taking the last, least and lost and making them into fine gentlemen is a 70-year legacy that’s still going strong,” he said.

The school’s history dates back to 1948 when Rev Belet, the parish priest of St Joseph’s Church in Sentul, opened a small private school within the church compound.

The La Salle Brothers were requested to take over after two years. They bought a 1.8ha freehold land and La Salle Sentul opened its doors as a primary school. 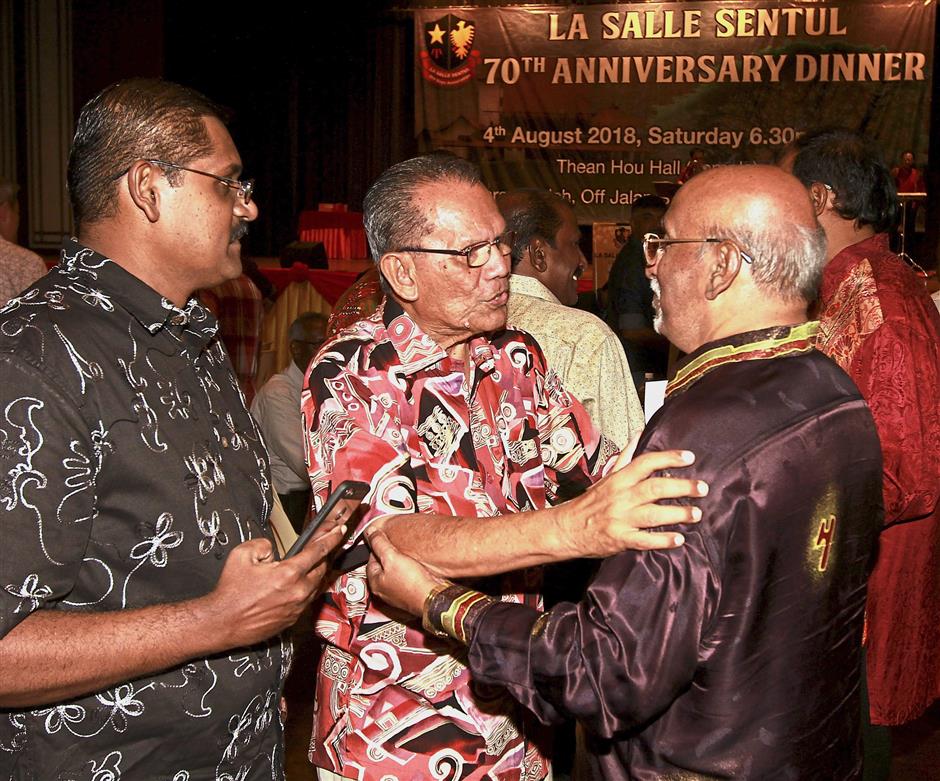 The secondary school started at the end of 1964, although Form Four and Form Five classes were only established in early 1985 and late 1986, respectively.

Magandran said La Salle Sentul has the distinction of being the teaching ground for Francis Sta Maria, who was certified the longest-serving teacher by the Malaysia Book of Records in 2015.

“I retired last year after 67 years of teaching. I started teaching at La Salle Sentul as an 18-year-old, fresh out of school, and served there for 31 years,” said Sta Maria, 83.

“I juggled work and studies for three years, spending my weekends studying at a teachers college to earn my teaching certificate. I qualified as a teacher in 1957, the year our country gained independence.”

On his teaching approach, Sta Maria said he was strict yet kind.

“I would praise the boys when they did well, but cane them if they misbehaved. I was very fair to all my students and never practised favouritism.

“If there was any trouble in class, the monitor will get reprimanded first because he was supposed to take care of his class!” he said with a laugh.

Sta Maria noted that students then came from poor backgrounds, hence they were eager to learn in order to get good jobs and get out of poverty.

Former students who wish to contribute to the monument fund can call LSSOBA secretary Don Darrell at 012-344 2798.