LABUAN: The gross value of fisheries output totalled some RM14bil last year, with the highest amount coming from fish catch, and the remaining shared by the aquaculture and land fisheries industries, respectively.

The fish catch output value recorded RM11bil while RM2.9bil was through aquaculture and land fisheries (freshwater breeding) was RM0.1 bil.

Agriculture and Agro-Based Industry Ministry secretary-general Datuk Munir Mohd Nawi said the fisheries industry total could have been more as the government had estimated a loss of RM6bil every year because of illegal activities by foreign boats and trawlers.

Of the total, RM1.8bil in losses was estimated from deep-sea fishing and the remaining RM4.2bil from inshore fishing.

“We are working together with the Malaysian Maritime Enforcement Agency (MMEA) and Marine Police to ensure we will not continue to lose our marine resources to foreign fishermen,” he said at a press conference here after launching the Engagement Programme of Labuan Fisheries Department.

He said a total of 256 foreign vessels, especially from Vietnam, with some RM180mil of catch onboard were seized from 2016 to date.

“We are looking at increasing our assets and personnel to ensure our monitoring control surveillance efforts are effective,” he said.

On unscrupulous Malaysian businessmen appearing to be working with foreign fishermen by leasing their deep-sea fishing licences, he said it was an unethical act.

Munir disclosed that the European Commission (EU) had given Thailand, a ‘yellow card' to crack down on illegal fishing or face a trade ban on its fish imports.

“We hope the issuance of a yellow card to Thailand will help us to reduce the leakage of revenue,” he said. — Bernama 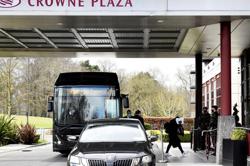