IT WAS a bittersweet moment when Willie Voon accepted the Group Agency Manager (Whole Group – Entrepreneur Award) at a Night of the Stars (NOTS) event for Zurich Life Insurance Malaysia Bhd sales advisors.

“This was the first time VFJ Group was named champion, after placing as first runner-up for the same category for more than five years,” said Willie.

“I wish my father, who passed away last year, was still alive to witness this. Voon Foot Jee started the agency 28 years ago and he would have been proud of our win,” he said. Willie, 36, said the night was particularly meaningful as the award was presented one year after his father’s passing. His agency took home three other awards that night.

“I credit our success to the teamwork by our agency managers as well as the leadership and direction set by my father,” said Willie, adding that there are 140 agents under Kuching-based VFJ Group.

A total of 805 top performing life insurance and takaful consultants were recognised for their exceptional sales performance last year at the annual agency awards night. Narayanasamy (sixth from left, with garland) acknowledging the crowd after winning the nights highest award – Top of the Table. On his right is Zurich Life Insurance Malaysia Bhd chief executive officer Philip Smith while looking on are Narayanasamy‘s family and agency members.

Some 344 Zurich Life Insurance sales advisors were honoured, while 461 Zurich Takaful Malaysia Bhd consultants were feted at Night of the Takaful Stars.

NOTS’ highest award, Top of the Table, went to Group Agency Manager K. Narayanasamy, who has won the title five years in a row.

K. Anandraj was thrilled to be named one of the Million Dollar Round Table by First Year Commission winners. Anandraj (left) playfully accepting his award as a winner of the Million Dollar Round Table by First Year Commission from Mukesh.

It was an achievement the chartered accountant has been winning for 13 consecutive years.

On the secret to his success, Anandraj said: “Hard work, persistence, planning and focus. I know what I want and have personally set a target to grow my income by 30% each year.

“I believe in saving lives and adding value to my customers. My phone rings at odd hours because customers need my help. My family is used to it; they are also my strength and motivation.”

The 44-year-old said he is dubbed the “medical king” at his Petaling Jaya-based Zenith Group agency, as he specialises in medical cases.

A special Chairman’s Gold Award was also introduced this year to recognise top agency leaders (adopting the dual-agency concept) with dynamic production figures for sales in both conventional and shariah-compliant products. Willie with two of the awards his agency VFJ Group won.

“The awards night celebrates the people who have contributed to that achievement – not just our agents, but also our customers.

“Zurich paid out close to RM900mil in claims and benefits to both life insurance and family takaful customers last year,” said Smith, who is also Zurich Takaful executive director.

He said this year was the first time Zurich organised a joint celebration of the life insurance and takaful awards night, which was held at Genting International Convention Centre.

“We have about 1,400 agents for Zurich Life Insurance’s event and 1,600 for Zurich Takaful’s, to be held two days later.

“In between we have a full day of combined learning seminar and educational programmes for agents from both teams,” said Smith.

He described the company, which is marking its 50th anniversary this year, as a Malaysian institution.

“This organisation – nevermind the changes in owners, shareholders or colour – is a real and solid institution here,” said Smith. Zurich Life Insurance general manager Mukesh Dhawan said this year’s celebration was more multicultural and multifaceted, as the Zurich Takaful team was part of the celebrations after the takaful business was acquired two years ago.

“In terms of growth, we are planning to do it through increasing agency manpower and greater market penetration this year,” said Mukesh.

“We want to expand our presence with our range of products and grooming new talents. Zurich Life Insurance is targeting a 10% to 12% agency growth for 2018, and 12% to 15% for top line growth.”

He said Zurich Life Insurance’s products include those that focus on simplicity and ease for the mass market, and the smart and sophisticated type for a niche market.

“For the overall industry, the life insurance and takaful penetration rate has remained fairly static, within the range of 54% to 56% for the last five years. There’s potential for growth for the takaful sector, as the penetration rate is only 15%,” said Mukesh.

“We’re looking at recruiting more youngsters to join the insurance industry. By that we mean those who are in their early 30’s and have had some work experience.

“The insurance industry is also ideal for women who want to be financially independent and contribute to their family. Women are able to multitask well, have entrepreneurial streaks, and are able to take charge and influence people,” he said, adding that many of Zurich’s top winners are women. 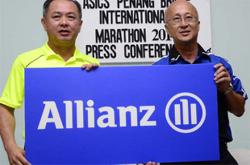 Allianz’s premiums to grow with agency sales up