SEB wants contractors to be careful when dealing with cables

“I hope everyone will give their cooperation to SEB so that our infrastructure projects can be carried out successfully for the benefit of all.

“Your cooperation will help us to light every home, especially during this festive season,” he said at a buka puasa hosted by SEB at Borneo Convention Centre Kuching on Monday.

Supply was restored at 3pm through the Tatau supply line while repair works were estimated to be completed by Sunday due to the extensive damage.

SEB expressed concern over the recurrence of excavation-related outages, saying 22 incidents had been recorded in Selangau alone since the Pan Borneo project commenced in 2017.

He said SEB would ensure that its generation, transmission and distribution projects complied with industrial best practices.

In addition, he said SEB would continue to implement the Sarawak Alternative Rural Electrification Scheme (Sares) in line with its target of achieving 100% electricity coverage in the state by 2025.

“We have also launched several 500kVA mobile generator sets which can be used as an alternative source of power when supply interruptions occur.

“This will also help improve and speed up our response time,” he said. 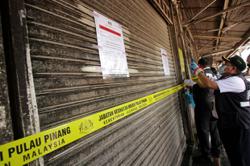