Illegally parked cars narrowing the road at Awan Besar LRT station make it difficult for passengers to alight from and board the bus.

IRRESPONSIBLE motorists have been parking their cars illegally on the main road leading to the Awan Besar LRT station in Kuala Lumpur, causing traffic congestion and endangering other road users.

That selfish act of the residents living in nearby condominiums is endangering motorists who need to enter or exit the LRT station car park or pick up and drop off passengers.

Buses are also inconvenienced as the road meant for two-way traffic becomes narrow, making it difficult for passengers to alight from and board the bus.

When StarMetro visited the area recently, we discovered more than 40 cars parked indiscriminately around the station.

The LRT management had placed notices on the windscreens of the illegally parked cars, warning motorists not to park there.

However, the warnings were ineffective as the passenger pick-up zone was full of cars parked illegally.

According to an auxiliary policeman at the station, traffic cones placed along the passenger pick-up and drop-off points to deter motorists from parking there were either moved or stolen.

“The situation gets worse in the evenings as the number of cars parked illegally increases,” he said. Motorists are not deterred by the warning notices placed on the windscreen by the LRT management.

“There are even cars that have parked here since last year, with expired road tax,” he added.

Teh Kah Kin, a reader of The Star newspaper, said he had written to the authorities about the issue but there had been no enforcement.

“I normally drop my daughter off at 8am and pick her up at 6pm on weekdays.

“I take the LRT too but at different hours of the day. The problem persists,” he said.

Noraini Ahmad, who commutes to work on the LRT every day, said the carpark was quite crammed in the morning and the volume of cars tripled in the evenings.

“There was one time it was so congested that there was a long line of cars queuing up just to enter and exit station grounds in the evening,” she said.

“We are all tired after a long day’s work. So, we do not want to get stuck in a traffic jam at the LRT station as well,” Noraini said. 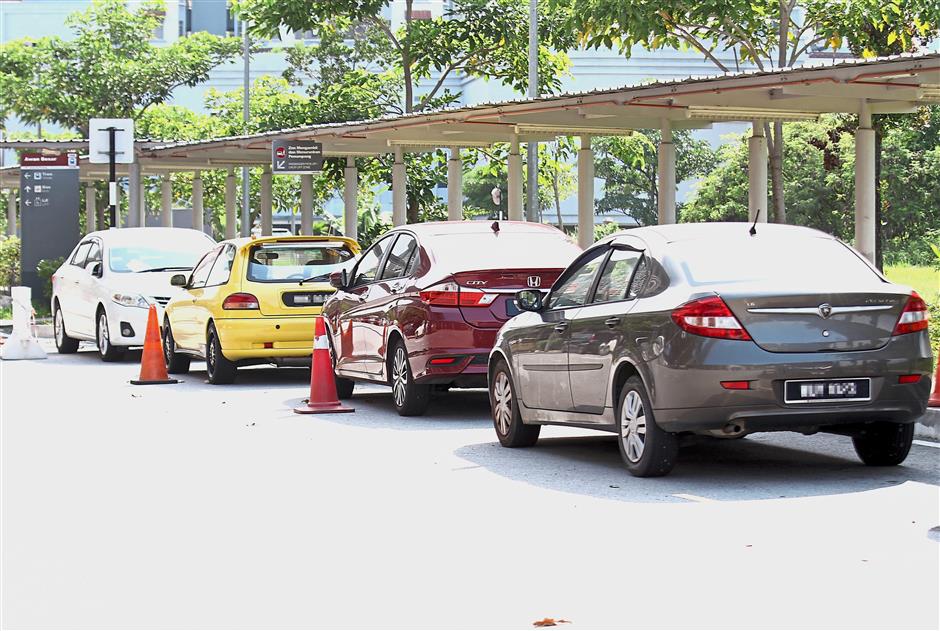 Traffic cones placed along the passenger pick-up and drop-off points to deter motorists from parking there are frequently moved or stolen. — Photos: MOHD SHAHRIL ROSLI

A Prasarana Malaysia Bhd group communications and strategic marketing department spokesman said the company was aware of the situation and was working with the authorities to address concerns.

“We will meet with Kuala Lumpur City Hall to find ways to resolve the issue,” he said.

“We hope the public will be mindful and considerate, and stop parking indiscriminately,” he added.

The spokesman said there were 192 parking bays, including for the disabled, at the LRT station as well as 50 motorcycle bays and 20 bicycle bays.

“Parking is a flat rate of RM4 per day, so please utilise the bays,” he added.