Serving notice: MBPJ councillor Sean Oon looks on as a health officer puts up the notice of closure on one of the restaurants.

THE three restaurants in Petaling Jaya that were ordered shut by the city council yesterday were penalised, not only for having a dirty premises, but also for unhygienic practices.

These practices are namely washing and cooking in the back lane instead of at the kitchen as well as throwing grease and dirty water into the drains.

It is also an offence not to have a proper grease trap to prevent oil and grime from entering the drains.

In fact, the premises of one restaurant that was ordered to close was clean, but it violated the other mentioned regulations. MBPJ health officers checking for cockroaches and rat droppings in a refrigerator.

“So it is not just cleanliness that we check for, it is more than that. If the restaurant’s dining area is clean it does not mean that they will not be shut down,” he said.

The three eateries ordered to close – Restoran Gasing, Raju’s restaurant and Sri Paandi restaurant – are located in one row along Jalan Chantek 5/13 in Section 5.

Petaling Jaya City Council (MBPJ) health officers conducted a random raid on dirty eateries in the area yesterday and shut the three premises after finding rat droppings and cockroaches in cupboards and refrigerators.

Officers checked all tight corners with torch lights, and even swabbed the hands of all workers for traces of E.coli bacteria.

Workers were also asked to show proof of their typhoid injections. The dirty kitchen in one of the restaurants.

Even the buffet line that doubled up as a food warmer was checked thoroughly.

“We also found insecticide bottles stored together with food items which is a health hazard,” said Oon, who led the random raid, adding that no complaint was lodged against the three eateries.

He also said the three eateries dumped waste into the drains behind their restaurants contributing to the dirty waters in the nearby Taman Jaya park.

Since January MBPJ carried out daily raids to inspect cleanliness of eateries with 59 restaurants out of the 250 inspected being shut down. An MBPJ health officer taking swabs from the hands of a restaurant worker.

“We have three teams of 15 officers who will inspect restaurants on a daily basis but if we receive a complaint on a particular eatery then we will go there immediately,” he said, adding that 12 compound notices were issued yesterday and each fine was about RM250.

Oon added that the three restaurants would remain closed until the owners took remedial steps according to the set guidelines. 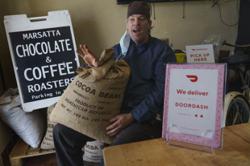