Working together for mutual benefit

SIBU: There was early Gawai Dayak cheer for 710 occupants from 28 longhouses who received a total of RM2.4mil as dividend and cash incentives from cultivation of their native customary rights (NCR) land.

The land totalling 5,665ha at Ulu Sebauh in Bintulu had been developed into a commercial oil palm plantation since 2005 on a joint venture basis with Ta Ann Pelta Silas Plantation Sdn Bhd.

Production had been increasing steadily to an average of 5,200 metric tonnes per month presently, said the company in a statement.

The landowners had been receiving cash incentives since 2010 but this was the first time the they had also received dividends.

Sarawak Utilities Minister Datuk Seri Dr Stephen Rundl Utom who was present at the handing over ceremony, said the benefits received by the community extended beyond monetary gains. 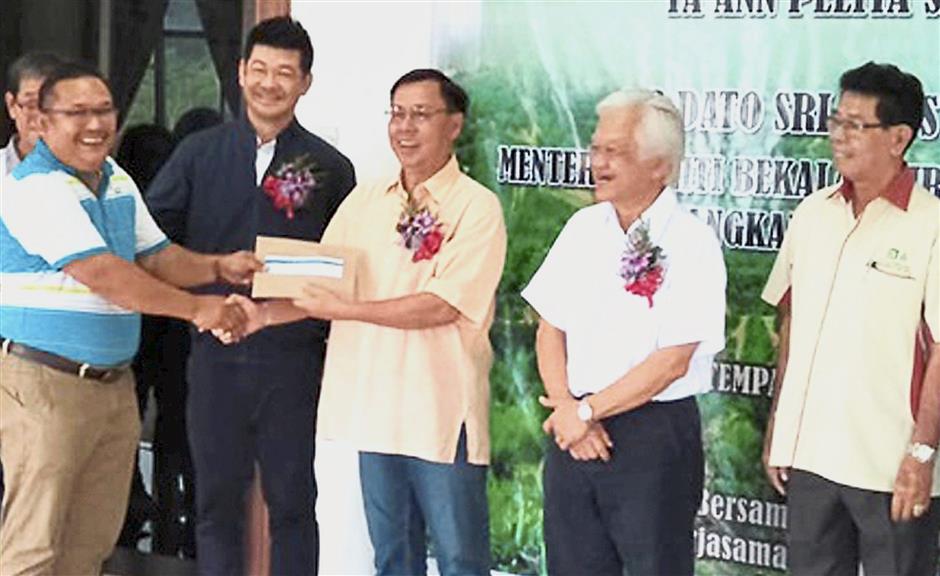 A recipient receiving the dividend from Dr Utom (third from right) while Abdul Hamed (second from right) and others look on.

“The money has enabled all of you to increase your income in a sustainable manner and improve your living standards,” he said.

The venture is also helping the community in the long-term as Ta Ann Holdings Bhd has been contributing RM100,000 per year to an education fund.

“The money will be used to help underprivileged and deserving students pursue higher education.”

Abdul Hamed thanked participants for their strong support and confidence in the project.