Traders waiting for customers at the bazaar during rainy weather.

THE rainy weather the past few days has not stopped people from visiting the Ramadan bazaar at the Perak Stadium in Ipoh.

It is still bustling with thousands buying food for dinner or to break their fast.

While some traders are hoping that the rain will ease up, there are those who see the rain as hujan rahmat (blessed rain) as it does not seem to be deterring people from coming to the bazaar.

Roti John seller Rizal Affandi, 44, said the rain did not bother him, though it had a slight impact on his business.

“It has been raining during the evening the last few days but I still think we are doing okay. Khairil and Khairi frying the mini murtabak to attract buyers.

“If I lose some customers today, I will get them tomorrow or another day,” he added.

Rizal said business has improved steadily since the first day he opened the stall last week.

“My wife and I have been running a Ramadan stall since 2007.

“We are fortunate enough to have regular customers who are willing to brave the rain to buy from us,” he said.

“But hopefully, the weather will change for the better so we can have more income to celebrate Hari Raya,” he added. 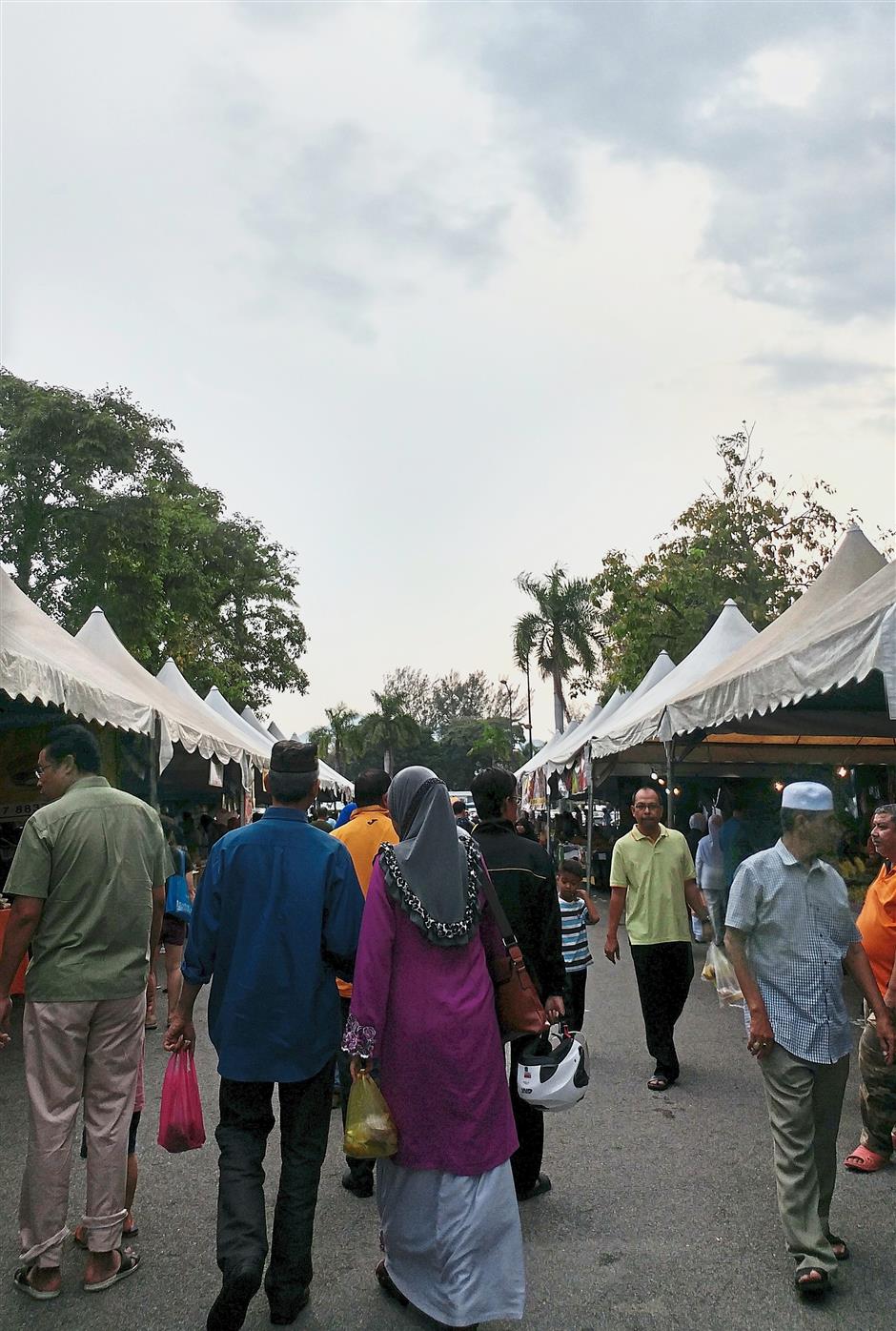 Gloomy clouds hovering over the Ramadan bazaar near the Perak Stadium.

The Meteorological Department issued a statement that the inter-monsoon period is expected to bring heavy rains, thunderstorms and strong winds to the peninsula’s west coast states and interior in the middle of May.

There are about 300 stalls at the bazaar and the erratic weather is expected to continue taking place in the evening.

“I sell different kinds of fermented fish that I ferment for several weeks in rice, tamarind and brown sugar.

“When it rains, people get hungry and the fermented fish helps to warm up my customers in the cool weather,” he said, adding that he garnishes his fish with bird’s eye chilli, lime and fried onion.

“It is also one of Perak’s traditional delicacies and the perfect dish for breaking fast,” he added.

Zulkefli said the rain has not impacted his business much.

“Whenever it rains heavily, there will not be many customers. Nurul Ashikin and her mother sell about 500 kuih during fine weather.

“But when the rain eases up, fortunately about 6pm usually, they will come over to get the food here so it is a blessing in a way,” he said.

“It is usually hot during midday and the rain will have a cooling effect,” he added.

Meanwhile, murtabak seller Khairil Ahmad, 25, said he prefers fine weather, although the rain has no impact on his business.

“As traders, we hope that it will not rain heavily every day.

“But I also cannot complain because people usually get hungry when it rains and in cool weather,” he said.

“They will want to buy more food from us,” said Khairil, who sells a mini version of the murtabak at the bazaar with his friend, Khairi Ahmad, 39, since 2001.

Khairil said he could sell about 1,500 pieces daily, rain or shine.

“The skin of our murtabak is crispy, similar to roti canai. We sell three versions – with chicken, beef or sardine,” he said.

“We have managed to sell all our murtabak in the last few days,” he added. The Roti John business getting ready to serve customers.

Over at the bazaar in Medan Gopeng, a kuih seller, who only wanted to be known as Nurul Ashikin, 25, said the rain was affecting her business.

“Fewer people are coming by these days, especially when it pours.

“There is no roof or shelter to protect the people from the rain so I understand why not many people come over,” she said, adding that she sells about 500 pieces of kuih when it is not raining.

“I think the rain is bad for business, so I hope that the sun will come out soon so that people can come out and enjoy the delicious food offered in this bazaar,” she added.

Western food seller Alex Marian, 22, said she was slightly discouraged by the downpour.

“This is my first time selling at a bazaar.

“I am quite surprised that it has been raining quite a lot,” she said.

“This is discouraging because I am not getting the number of customers that I have hoped for.

“I hope it will not rain heavily in the next few days so business will pick up,” she added.