Stained finger a matter of pride for Malaysians

Voters queuing up to cast their ballots during the 14th general election at SK Taman Seri Kota in Yong Peng, Johor. — filepic

THERE is a new “badge of honour” that most Malaysian adults have been wearing the past week – the indelible ink stain on their index finger.

It is with pride that we wear this “badge of honour”, for it is a symbol of how we had patiently queued on polling day and fulfilled our civic duty to cast our vote.

Adults who were clearly above 21 years old but did not have the indelible ink stain were gently made fun of or questioned as to why they did not vote.

The inked finger has even become a point of conversation after the elections, with people comparing notes about how the inking process was done or how best to remove the stain (bleach, lime and exfoliants were among the suggestions).

The GE14 campaign period has also brought out the best among Malaysians.

Some have been written about, the “amazing race” to get postal ballots from overseas Malaysian voters back to their respective polling centres in time for their votes to be counted, as well as people generously offering carpool services or donating money to strangers so they could return home to vote.

Personally, I observed many good and bad things during the campaign.

Everything was very orderly and clean at one ceramah I attended, despite the large crowd that turned up.

Instead of the mess that is commonly seen at the end of large-scale events, ceramah attendees took the initiative to clean up after themselves.

They stacked the plastic chairs and threw rubbish into rubbish bins or bags.

As a result of this group effort, the area was cleaned up pretty quickly.

Meanwhile, volunteers offered their time and energy to help candidates or political parties they felt strongly about.

They helped put up and take down banners and posters, distribute manifestos and campaign materials, direct the crowd and traffic at events, as well as take on polling agent and counting agent (PACA) roles.

On polling day, I saw one local resident voluntarily directing traffic around the polling centre.

The man was clearly a resident as he was not wearing any sort of uniform.

It was kind of him to direct traffic and inform motorists where they could park, in an attempt to help ease congestion outside the centre.

One friend posted on Facebook that voters were patient and took care of each other.

“Some went to buy water and gave it to us. Malaysians are the best!” said this friend who spent five hours queuing to vote.

I saw and overheard voters offering to share umbrellas or fans to cool each other down as they queued under the hot sun while waiting for their turn to vote.

One guy with a particularly booming voice would periodically shout “Tumpang lalu! Tumpang lalu!” (Make way! Make way!) whenever an election officer, pregnant woman or disabled person needed to squeeze through to get to their respective voting streams.

I also saw strangers bonding over the free or discounted meals and drinks that we got to enjoy upon showing our inked fingers at selected eateries.

Voters exchanged smiles and shared tables at crowded restaurants and cafes, as we savoured our burger, nasi lemak, ice cream and coffee treats.

However, having witnessed how long the voting process took, my colleagues and I felt that there were several procedures that could be improved further so voters do not have to wait for hours just to cast their ballot in future.

Another suggestion is to have more signage or instructions in prominent locations.

These signage should indicate where the voting streams are (some colleagues ended up having to direct voters to the right rooms), and whether or not voters need to collect a number slip from the entrance counters before going to their respective voting streams.

It would also have been helpful if all election officers had undergone the same basic training and gave standard instructions.

Instead, my colleagues and I had to deal with officers giving contradictory rules that made us confused as to what was right or wrong.

One colleague even suggested that tertiary-level students be educated on voting rights and the importance of being a registered voter.

“A topic on voting rights should be included in the Malaysian Studies subject so that young adults are better informed on what they can and cannot do,” she said. 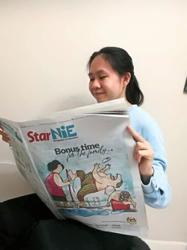