Supporters cheering on the leaders at the ceramah at the Esplanade.

A BIG crowd turned up for a four-hour mega ceramah organised by Pakatan Harapan to mark their win in the recent election.

Supporters attended the event with family and friends as they listened to the party leaders speak during the event at the Esplanade on Monday night.

Among those who spoke was Chief Minister Chow Kon Yeow who expressed appreciation to the coalition for entrusting him as the head of state.

The Penang DAP chairman told the cheering crowd that he will do his best to run the state.

Finance Minister-designate Lim Guan Eng thanked Prime Minister Tun Dr Mahathir Mohamad for electing him to handle the Finance Ministry and admitted that there was much work to be done.

“I have to be sworn-in first even though Tun Mahathir has announced that I am the Finance Minister. 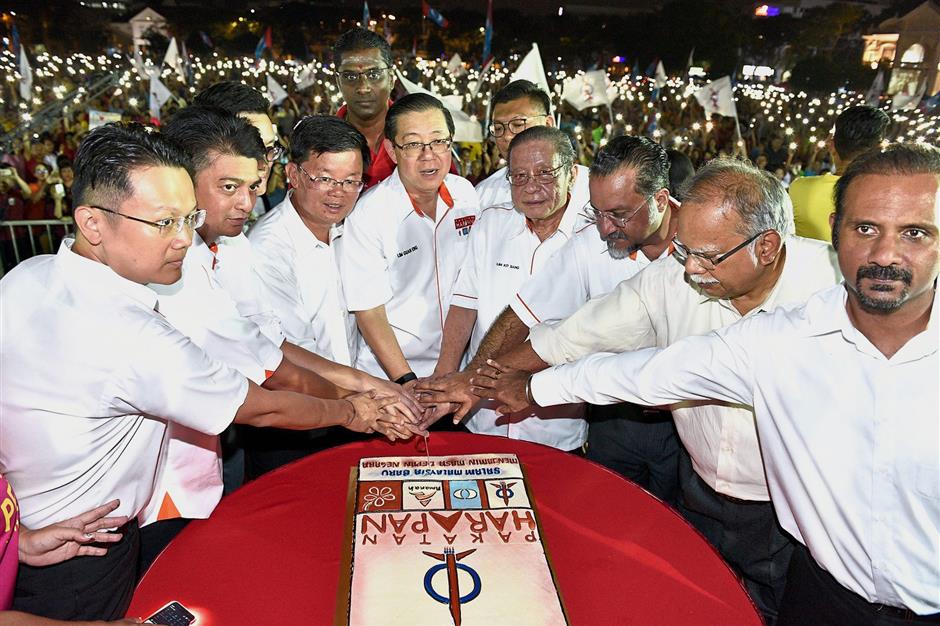 (From third left) Chow, Guan Eng and Kit Siang joining other leaders in the cake-cutting ceremony during the mega ceramah at the Esplanade in George Town. — Photos: GARY CHEN/The Star

“I don’t want to make any statement yet relating to the ministry but I would just like to say that I’ve had discussions with several government agencies under the ministry.

“I also had the chance to see the country’s financial statement,” said the DAP secretary-general.

Lim said that the numbers were not good but they will find a way to restore the country’s financial health.

There was also a cake-cutting ceremony performed by the speakers of the mega ceramah on stage.