KL candidates focus on task at hand in outlining strategies

THEY may have only just received official confirmation but these Federal Territory Barisan Nasional candidates are hitting the ground running to mobilise their election machineries.

Barisan candidate for Wangsa Maju Datuk Seri Yew Teong Look’s first step will be unveiling his manifesto for the area.

“We have almost completed it and we will unveil it this week,” he said.

He added that he was glad that the Barisan leadership had decided to return the seat to MCA after it was loaned to Umno in 2013.

On the possibility that unhappy supporters and aspirants may resort to acts of sabotage, Yew said, “As the MCA chairman has said, anyone from the party who causes chaos will be met with disciplinary action.”

“It is not easy to be a Barisan candidate in the constituency I was born in.

“If we look at past results, the task at hand is an unenviable one. What gives me strength is the fact that my leaders have put their trust in me and the immense support I have got from my friends and family,” she said. 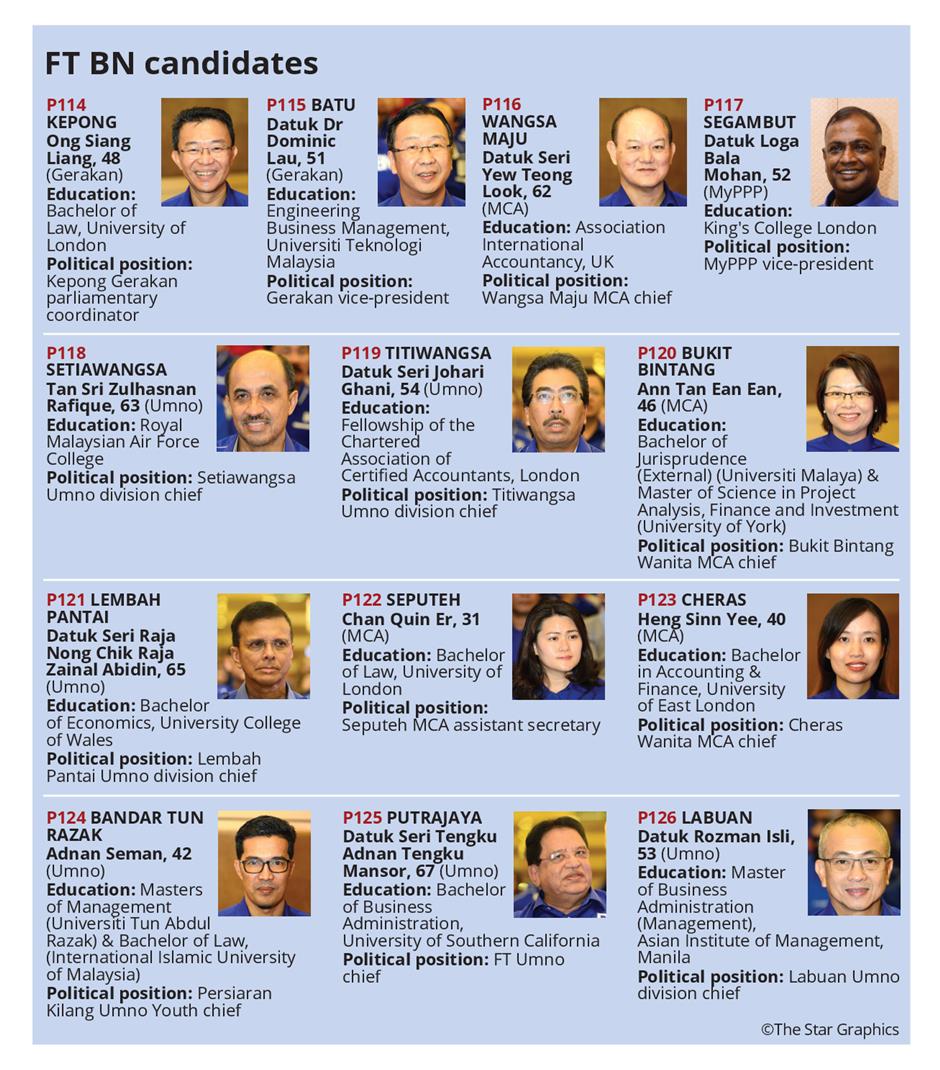 Set to go up against DAP’s Teresa Kok who has been Seputeh MP for the past four terms, Chan said she learned a lot from the former.

“Kok has been my MP for a very long time. I want to put Seputeh back on the legislative agenda. For a long while, Kok’s focus was largely on national issues. This is important.

“But equally important is for the MP-elect to reinvigorate community service and relations, making Seputeh a thriving community as it should be,” she said.

The 31-year-old former deputy public prosecutor planned to use social media in serving the community.

“We started two weeks ago and have raked in more than 2,000 likes on our Facebook page in a short time on a shoestring budget.

“Our focus is simple. Amplifying key, local and national issues on my timeline, making a gradual introduction to who I am and why I have chosen this path,” she said, adding that her manifesto would also be introduced next week.

It outlines his campaign for the area and reiterated that he had been working on the ground for the past two years.

Kepong Gerakan parliamentary coordinator Ong Siang Liang’s manifesto for his constituency was to transform townships like Kepong into a liveable city like Putrajaya.

“I want to see Kepong like Putrajaya, very clean and orderly,” he said. “I have plans to work with the local authority to improve the ageing infrastructure like drainage and roads.

“Kepong has the potential to become a tourist hub in Kuala Lumpur and we want to promote areas like Jinjang Utara and Selatan as tourist attractions.”

Manifesto with everyone in mind