Teng: Penang will receive more allocation if we are voted into power

DESPITE being an Opposition state, Penang has received RM2.08bil as allocation from the Federal Government between 2013 and 2017.

He said Kedah received RM1.76bil followed by Perak (RM1.25bil) and Perlis (RM360mil) during the sameperiod.

“We can fulfil all our promises in the manifesto. The state will receive more allocation if we win the state from Pakatan Harapan,” he told reporters after launching the Penang Barisan manifesto at a hotel in Seberang Jaya yesterday.

Asked why the monorail and LRT projects which were in the 2013 manifesto were missing from the present one, Teng said the people in the state had rejected both projects as Penang Barisan was not voted into power then.

“However, we are open to consultation with the people and those from the civil movements to revive such projects if we are voted into power in the upcoming general election,” he said.

On another matter, Teng said Penang never had it easy during the 22-year tenure of former Prime Minister Tun Dr Mahathir Mohamad.

“Penang was bypassed most of the time when it came to development projects.

“It was difficult for then Chief Minister Tan Sri Dr Koh Tsu Koon to get allocation for projects in Penang as the funds would not come.

“Dr Mahathir, for reasons best known to himself, did not allocate sufficient funds for Penang and most of the time we were bypassed,” said Teng, who was once a state executive councillor. 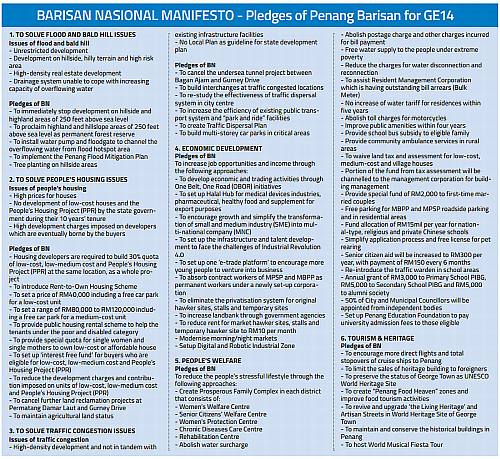