By INTAN AMALINA MOHD ALI I

(Front row, from right) Chow, Lim and Mohd Azam are all smiles on board one of the feeder buses at the launch of the CAT Ayer Itam service in front of SMK Air Itam at Jalan Thean Teik, Bandar Baru Ayer Itam, Penang.

service at its launch.

They can now ride the eight bright apple green coloured RapidPenang buses which are part of the state’s RM15mil free shuttle service launched on Sunday.

The buses are to run along two routes, CAT Ayer Itam A and CAT Ayer Itam B, on a 16km loop from the Paya Terubong hub near the EcoWorld Gallery @ Eco Terraces with a 10 to 15-minute frequency. The routes for the Ayer Itam feeder buses which started plying from Ayer Itam on April 1 under the Congestion Alleviation Transport (CAT) programme.

Route B is anti-clockwise to Route A.

“That is why we chose to launch the CAT Ayer Itam first,” he said during the launch of the service.

Services to other routes will begin at a later date.

The state has two other free bus service programmes — the Central Area Transit which began in 2008 and Bridge Express Shuttle Transit which was launched in 2011. 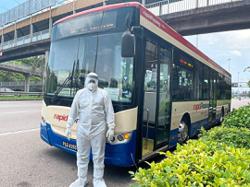