Kicking off travel plans for the year

AS MANY as 110,000 visitors thronged the 45th edition of the Malaysian Association of Tour and Travel Agents (MATTA) Fair at Putra World Trade Centre (PWTC) in Kuala Lumpur last weekend.

A total of 1,353 booths – the largest setup in the fair’s 27-year history – were created across seven halls and the exhibitors comprised travel and tour agencies, national and state tourism bodies, hotels and resorts, cruise and theme parks as well as other travel-related services.

Halls 4 and 5 housed domestic travel and tour exhibitors while international tour and travel attractions were promoted in the other five halls.

To kick off the fair, Malaysia Airlines offered discounts up to 50% for business and economy flights to local destinations such as Kota Baru as well as international stops that included Sydney, London, Auckland, Brisbane and Shanghai.

Malaysia Airlines chief commercial officer Arved von zur Muehlen said, “Malaysia Airlines-MATTA Fair deals offer the perfect opportunity for Malaysians to grab the best fares to their favourite holiday destinations or even explore new ones. We are very proud to be the official airline sponsor of MATTA Fair March 2018.”

Viewing Malaysia as one of its most important tourism markets, JNTO said 439,500 Malaysians visited the Land of the Rising Sun last year, an 11.5% increase from 2016.

At the Japan Pavilion, visitors got to experience activities that included the traditional craft of wagasa or Japanese umbrella made from bamboo and washi paper, popular games like kendama, a Yukata photo session as well as delicacies such as sushi and wagashi (Japanese sweets). Over at the Umrah Pavilion, a record 41 companies and 81 booths promoted umrah and haj packages, in addition to other services related to the pilgrimage.

Also having a booth was Sunway Putra Mall, which provided privileges to visitors who only had to show their MATTA Fair wristbands at selected outlets to get discounts on items and free cash vouchers for LRT rides to the fair.

To encourage the use of public transport, MATTA Fair partnered with Grab Malaysia to enable hassle-free rides to and from the event.

Visitors enjoyed RM4 off for two rides when they keyed in a promo code valid for the first 3,500 rides each day of the fair. With the Money Visa Multi-Currency prepaid card, customers were able to lock in exchange rates at the time of purchase of foreign currencies without additional charges.

Meanwhile, Desaru Coast made its debut at the fair, offering exclusive tickets for two of its soon-to-be-launched leisure and hospitality components – Desaru Coast Adventure Waterpark and the Hard Rock Hotel Desaru Coast.

For Desaru Coast Adventure Waterpark, the special promotion was to purchase two adult tickets and get one free admission, while Hard Rock Hotel Desaru Coast visitors who bought a RM300 cash voucher were entitled to another RM50 voucher that could be redeemed for accommodation or any services within the hotel. Visitors checking out the many promotions at MATTA Fair.

“We received a number of repeat visitors for Desaru Coast destination resort and the majority of local customers were very excited about our upcoming integrated premium destination in Johor.

“We foresee Malaysia’s newest destination being very convenient and appealing as an endless escape not only for Malaysians, but also for visitors across the region and beyond,” he said.

Another theme park was Legoland Malaysia Resort, which offered its Awesome Annual Pass at only RM199. Visitors getting a taste of Korea as the Hanbok is showcased at the fair.

“Most of the interested visitors knew about Legoland, thanks to MATTA Fair.

“Our best-selling package was our annual pass as there was a 50% discount and visitors also stood a chance to win a Nissan Almera. Muehlen (centre) at the Malaysia Airlines booth where discounts up to 50 on selected routes were offered to travellers.

“We expect more interest at the MATTA Fair in September with the opening of a new attraction – SEALife – in the fourth quarter of this year,” said Legoland Malaysia Resort sales and marketing director Thila Munusamy.

For cruise lovers, promotions by the Royal Caribbean Cruise included special deals for Symphony of the Seas, which will set sail from Barcelona for a seven-night Western Mediterranean cruise this summer. Royal Caribbean Cruises Ltd South-East Asia sales head Josh Wen said: “The fair is an important platform for us to promote our cruises to a nationwide audience.

“In spite of the growth in online booking in recent years, this fair is still highly relevant for us and our agents as customers looking for good deals can easily find a wide array of options in a single venue. 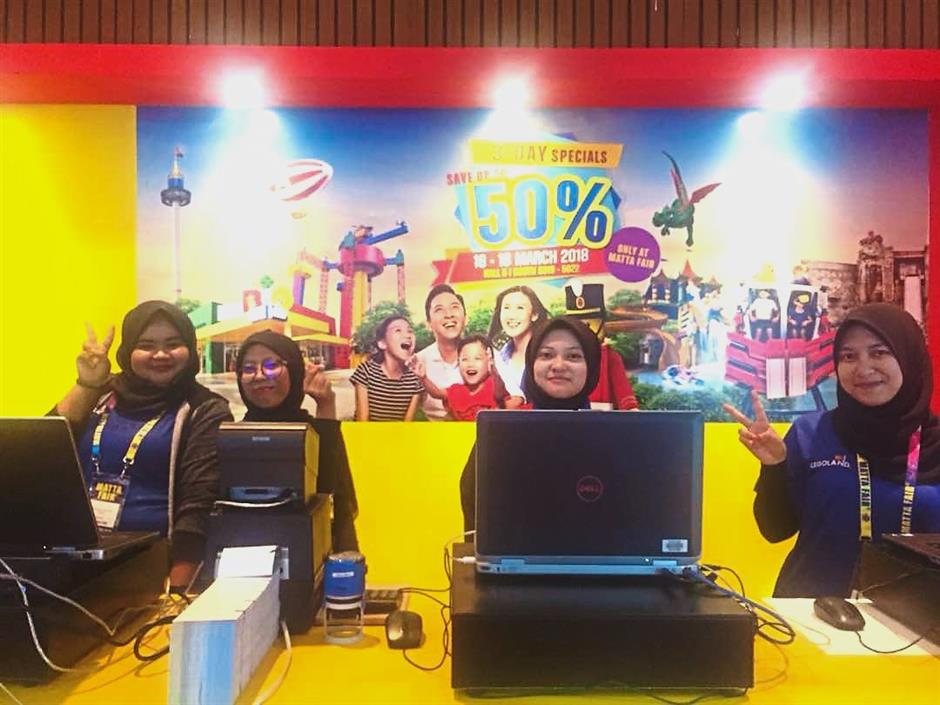 “Many of them still prefer human interaction when making enquiries and bookings, especially with so many new cruise ships coming up in the market.

“Thanks to MATTA Fair, our sales have doubled compared to the last fair, and we have exceeded our target sales by over 50%,” he added. About 110,000 visitors checked out MATTA Fair for tour and travel packages.

With every minimum purchase of RM300 on an international travel package or RM100 on a domestic travel package, visitors stood a chance to win the grand prize as well as air tickets to various other destinations and attractions.