Sam showing the recyclables at the stall in front of his house, which he says have attracted pests. — Photos: SAIFUL BAHRI/The Star

Recyclable items being stored at an abandoned stall along Jalan Sultan in Pasir Pinji are worrying residents there.

The heap is almost reaching the ceiling of the stall.

Residents are concerned as most of the items are cardboard boxes, which are a fire hazard while others include plastic bags and containers that could become breeding ground for pests and if water is collected there, Aedes mosquitoes too.

Sam Weng Wei, 54, whose house is located behind the stall, said an old man in his 70s, was responsible for the recyclable items at the stall.

“He is a friend of the noodle seller that used to operate here.

“The seller stopped about two years ago and since then, this old man has used the stall to store recyclables,” Sam said, adding that he had told the man to clear or sell the items but to no avail.

“I understand that he stays in Gunung Rapat and he comes here every afternoon on a motorcycle,” he said, .

He added that the old man had also rented another premises just down the road where more items were being hoarded.

“I have seen notices being pasted on the door but he just rips it off,” he said. A man spotted sorting out recyclables at the stall in Jalan Sultan, Pasir Pinji.

Sam said the stall had unpaid electricity and water bills amounting to about RM1,500 and RM164, respectively.

“Tenaga Nasional Berhad had once come after me because the electricity connection came from my house.

“But the stall has its own separate account so they should go after the right person,” he said.

Sam said he brought up the matter to Ipoh City Council in February last year and again last month.

“A few officers came to take photos of the premises but nothing else was done,” he said, hoping that the city council would dismantle the stall and remove all the rubbish there.

“There is also a tree near the stall that seems to be rotting.

“If its branches fall, it could get caught on some electrical wire and set the cardboard boxes on fire,” he added.

To add salt to the wound, Sam received summonses for the rubbish hoarded at the stall last year.

“The rubbish is not mine, yet I got two summonses, one in February and another in May,” he said.

Pests have also begun to appear in the area and have entered Sam’s home, which he lives in with another tenant.

“Apart from mosquitoes and other creepy crawlies, there are also snakes that have made the abandoned stall their home.

“This area is already a dengue hotspot,” he said. The other house just down the road from Sam’s house in Jalan Sultan in Pasir Pinji, with piles of recyclable items collecting outside.

Another resident, who only wished to be known as Lim, said the pile of rubbish was increasing in size.

“I walk past here daily to go to the market.

“My concern is that the rubbish here would catch fire and someone could get hurt or worse, killed.

“The garbage there needs to be cleared away for the safety of those staying around here,” she said.

Lim, who is in her 50s, added that the stalls were blocking the view of motorists at the junction there.

“It is really a hazard. Motorists need to drive further out onto the main road to be able to see if there are any oncoming cars,” she said.

“I helped him lodged two police reports and brought him to the city council headquarters to explain to them that the stall was not his.

“They accepted his explanations and did not take further action,” Foo said. 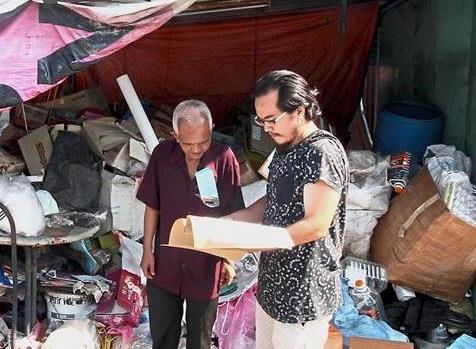 Foo also met with the hoarder and told him to clear the rubbish.

“His reply was ‘okay, okay’ but he has not done anything about it.

“There was a fire recently nearby and I am just worried that it can also happen here,” he said.