IT WAS a proud day for a total of 2,914 Universiti Tunku Abdul Rahman (Utar) graduates as they received their scrolls at the university’s 26th convocation ceremony over the weekend.

Held at the Kampar campus, 135 graduates received their doctorate, master’s, and bachelor’s degrees.

Kee Cia Hee, who received her Master of Business Administration in Corporate Governance, said she was thankful her hard work eventually paid off.

The 31-year-old HSBC sales manager from Kuala Lumpur said she would not have made it this far without the support from her parents and employer, who had given her much support and work flexibility. 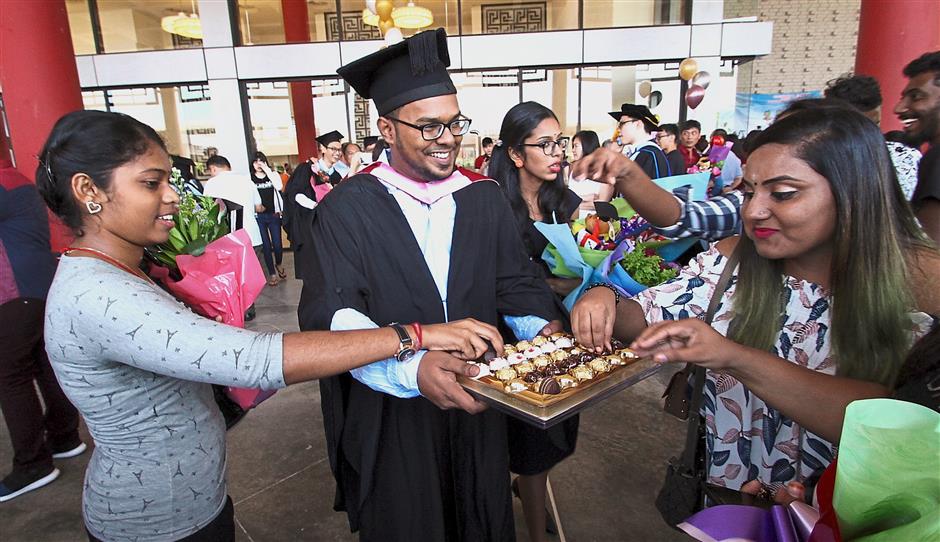 K. Logeshwaran (centre), who majored in advertising, offered his friends chocolates after the 26th Utar Convocation session in Kampar.

xx“Throughout the one-and-a-half years of studying, my weekday nights and weekends were meant for lectures and revision at Utar’s Sungai Long Campus in Kajang.

“I must say that I made the right choice by choosing Utar for my postgraduate studies because, apart from the good lecturers and infrastructure, the timetable here was flexible for working adults.

“It was tough juggling my work, personal, and study commitments, but that also trained me to plan my time properly so that I did not neglect any aspect,” said Kee.

The 22-year-old who is currently working as a public relations associate said he hopes his studies will help him in his work.

“Being a city boy, it was not easy adjusting to the campus life here at first in laid back Kampar. Ong (right) handing a scroll to a Utar graduate during the event.

“However, I had lecturers who went above and beyond to guide me and assist me academically by both listening and giving feedback.

“I have become more independent and resilient in the face of adversity.

“I am glad that Utar has prepared me to face any possible challenge which may crop up later in life,” said Carlos, who was offered a full scholarship thanks to his excellent results.

Some 736 graduates received their scrolls during the first session of the convocation ceremony, with 714 recipients in the second session, followed by 638 and 826 in the third and fourth sessions over the weekend.

United Malacca Bhd Chairman Datin Paduka Tan Siok Choo, the daughter of Tun Tan Cheng Lock, who founded MCA, was the guest of honour during the first day of the ceremony. Many of the graduates were seen posing for group photos with their friends.

“The graduation serves as the launching pad for your future endeavours.

“I hope all of you will recognise that and as you move on to personal growth and success in your careers,” he said.