Prized residences on the mainland

With three meticulously furnished show units in the gallery, visitors will also be flooded with ideas on how to decorate their future homes.

At the launch of the showroom on the second day of Chinese New Year was Hong Kong actor and singer Ruco Chan, who praised the modern concept of the development and its affordability.

“In Hong Kong, property is expensive and difficult to buy. Here, I see a chance for us to own property. Visitors are awestruck with the living room of a show unit of Gem Residences.

“I am looking forward to encouraging my co-stars to invest in this project,” he said.

A joint endeavour between Belleview Group and LTC Corporation Limited, GEM Residences is a new freehold condominium along Jalan Baru next to GEM Megamall, touted to be the largest shopping mall in the northern region.

Belleview Group managing director Datuk Sonny Ho said the project was affordable for the masses, with units sold at between RM350,000 and slightly over RM800,000. “With an average selling price of RM500 per sq ft, GEM Residences is one of the most attractively priced residential projects.

“It has become difficult to buy landed property and condominiums are a convenient alternative especially for the younger generation,” he said.

On the sales gallery, he said it is one of their best showrooms to date.

Comprising four 38-storey towers, GEM Residences will have a total of 978 units with six layout ranging from 441sq ft to 1,445sq ft.

The condominiums will feature private landscape decks, an extensive range of facilities and a three-tier security system. Potential buyers taking a closer look at the Gem Residences model during the launch.

Named after gemstones — Coral, Ruby, Sapphire and Diamond — each level on the four towers have eight or nine units each.

The shopping mall covering 11.32 acres will consist of six levels of retail floors featuring about 450 shops, an Olympic-sized skating rink and a 20-screen cinema.

GEM Residences and GEM Megamall are slated to be completed in 2021.

Currently available for purchase are units in Ruby and Coral comprising 259 and 230 units respectively. 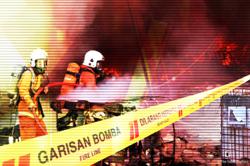