MBSA will remove heavy vehicles parked indiscriminately along road shoulders in the city.

MOTORISTS who illegally park in residential areas in Shah Alam will have their vehicles towed away and fined RM3,500.

The move by Shah Alam City Council (MBSA) comes following numerous public complaints over the nuisance caused by heavy vehicles such as buses and lorries that are haphazardly parked on road kerbs, dividers, fields, parks and other open spaces.

Mayor Datuk Ahmad Zaharin Mohd Saad said these vehicles were an obstruction mainly to the people living in neighbourhoods within the city.

“Some park at the main junctions of busy roads and cause traffic congestion,” he said after chairing the monthly full board meeting yesterday.

Ahmad Zaharin said such vehicles were an eyesore, creating a negative image for the city in addition to damaging public property.

“Most of these drivers park their vehicles overnight,” he said, adding that some of them remained at a particular spot for days, sometimes weeks.

He said the council has hired loaders and acquired the services of tow trucks to tow away these illegally parked vehicles.

“Owners of the vehicles will have to pay a hefty fine of RM3,500 and RM50 per day as storage fee until the vehicles are collected from the council depot,” he added.

On another matter, Ahmad Zaharin said the council has introduced a “Smart Payment” feature on its Flexi Parking app that allows for payment of parking compounds.

He said motorists only need to scan their compound notice and settle the fine using their smartphones.

“The money will credited into the council’s account once the payment is made,” he said, adding that the new feature is already available.

The mayor said this would save the public time as they would not have to go to council’s offices or kiosks to make the payment.

He said MBSA would charge a flat rate of RM10 if the summons is settled on the same day it is issued.

“However, those who want a discount on unsettled fines must visit our office because the payment via the app is determined by the barcode on the compound notice, which is set at a standard amount,” he added. 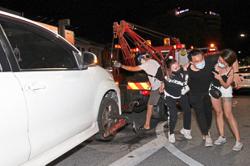