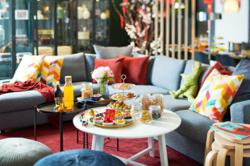 He attended the event organised by the Federation of Chinese Associations Malaysia (Huazong) in Seri Kembangan Saturday morning.

Liow arrived at 9.45am to greet Huazong members. As many as 120 tables were laid out for the members with the biggest table, with a seating capacity of about 50, in the centre of the auditorium for the VIPs.

In his speech, Pheng praised Najib for actively promoting bilateral relations with China since he took office, rekindling diplomatic relations that was first promoted by his father. God of Prosperity giving a mandarin orange to a visitor at the ACCCIM Chinese New Year Grand Dinner in Setia City Convention Centre.

Najib, in his speech, said relations with China was at an all-time high and will be furtherstrengthened under his leadership.

A yee sang-tossing session was also held during the celebration.

Later the same night, Liow and Najib attended a grand Chinese New Year dinner hosted by the Associated Chinese Chambers of Commerce and Industry of Malaysia (ACCCIM) at the Setia City Convention Centre in Shah Alam.

The dinner was attended by over 3,500 guests from the Chinese commerce and industry in Malaysia. In his speech, Najib described the dinner as a “reunion” between ACCCIM and the Government considering the good relationships formed over the years.

“We all recognise that whenever Chinese New Year is celebrated, there’s a very strong element, which is getting together by starting with a reunion dinner among family members.

“This evening is also a reunion for us, where we get together to feel a sense of camaraderie and new commitment to work together to achieve a more prosperous, successful and united Malaysia,” he said.