The homeless and underprivileged enjoying breakfast at the Jom CNY 2018 event at the Kuala Lumpur Homeless Transit Centre in Jalan Pahang.

The event, called Jom CNY 2018, saw some 200 people from the centre and underprivileged people from the Chow Kit area enjoying a wholesome meal sponsored by Pelaburan Mara Bhd.

Institut Onn Ja’aafar (IOJ) chief executive officer Charles Mohan said its aim was to share festive cheer with the homeless and the underprivileged.

“The centre is ideal to organise events during festivals as those in the Chow Kit area are familiar with the place, making it easy for us to mobilise our volunteers,” he said.

Held for the third consecutive year, Charles said IOJ had also been holding Jom Raya and Jom Diwali events at the transit centre since February 2016.

Its aim, he added, was to allow student volunteers from private and public institutions to mingle and understand the socioeconomic problems faced by various groups in the city. 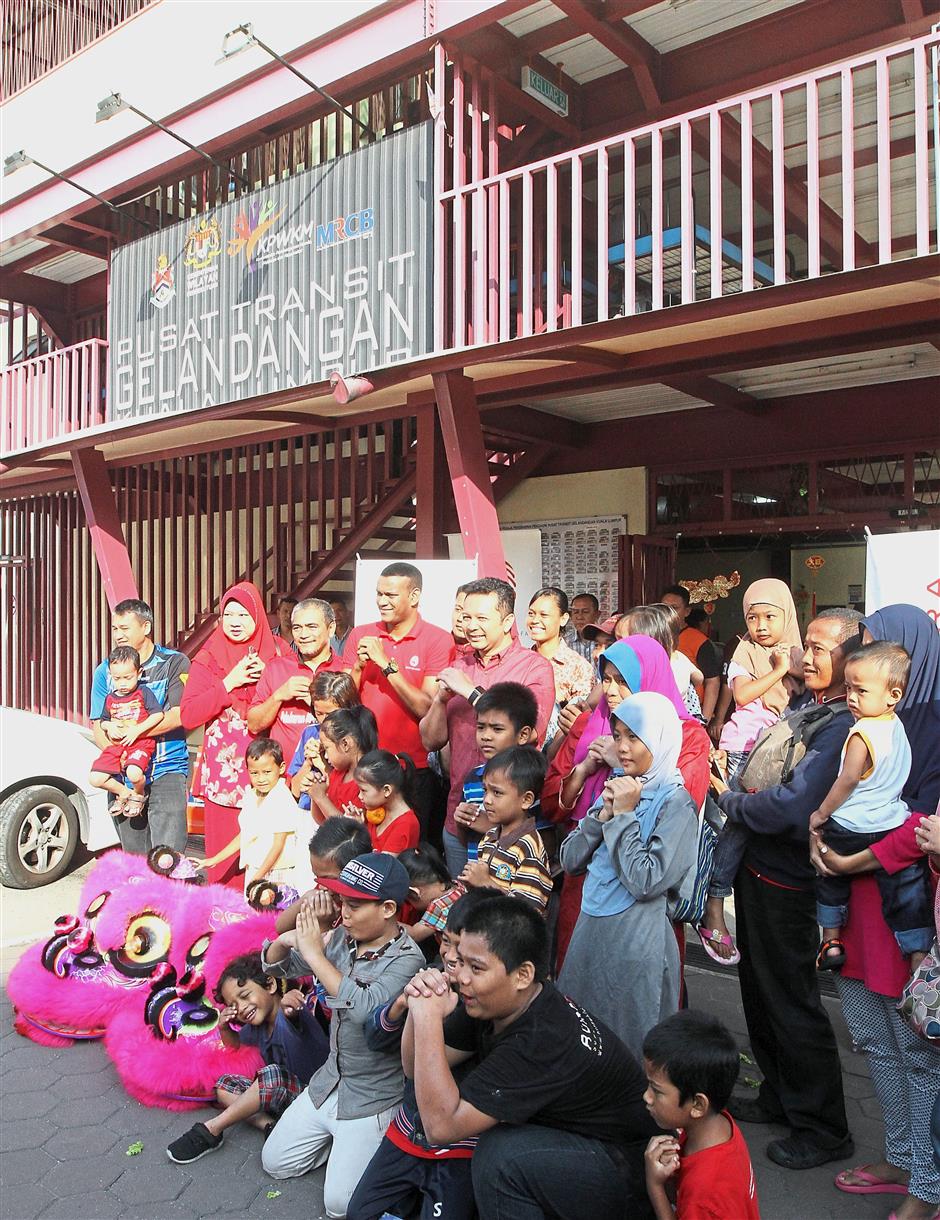 Nazim and Charles with some of the underprivileged families from around the Chow Kit area during the breakfast event.

“It is our small contribution within the framework of a bigger agenda.

“One might see it as simple breakfast but it is very meaningful, especially since some may not have had a meal the night before,” he said.

Nazim added that the company was happy to provide financial assistance and an army of volunteers when needed.

For friends Charlie Chua, 58 and Cheng Kim Wah, 46, the noble effort did not go unnoticed.

Cheng has not celebrated Chinese New Year with his family from Raub, Pahang for five years now and he admitted to missing the fun.

“We have some family issues so I have not spoken to them in years. I do miss the times we celebrated the new year together,” he said.

These days, he spends the lunar new year with his friends and co-workers.

Cheng said he was glad to celebrate with everyone before heading off to work later that day.

“The cheerful feeling is definitely there and I am glad they came to create that environment for us,” he added.

Meanwhile, Chua was all smiles as he sang Chinese New Year songs and went round greeting his friends.

A two-week resident at the transit centre, Chua first came to Kuala Lumpur to look for a job.

“I heard from a friend that they had shelters like this to help people like me who are in-between jobs. So I came here,” said Chua, whose only sister lives in Muar, Johor.

He said the Federal Territories Ministry was doing a good job in taking care of the needs of the homeless and underprivileged in the city, adding that he was glad to have a place to celebrate with his friends.

Guests at the breakfast event were also treated to mandarin oranges and special Malaysian ice-cream courtesy of Gombak Food Delivery.

There was a lion dance performance to entertain them as well as an ang pow presentation.