Pilgrimage of prayer and penance

WITH a 45kg home-made kavadi hoisted and placed on his shoulders, Dr M. Sarveswara was among hundreds of kavadi bearers who made their way to the Waterfall Hilltop Temple in Jalan Kebun Bunga.

The 38-year-old from Kuala Lumpur purposely made the trip back to Penang to fulfil the second of his five-year vow during the Thaipusam celebration yesterday. 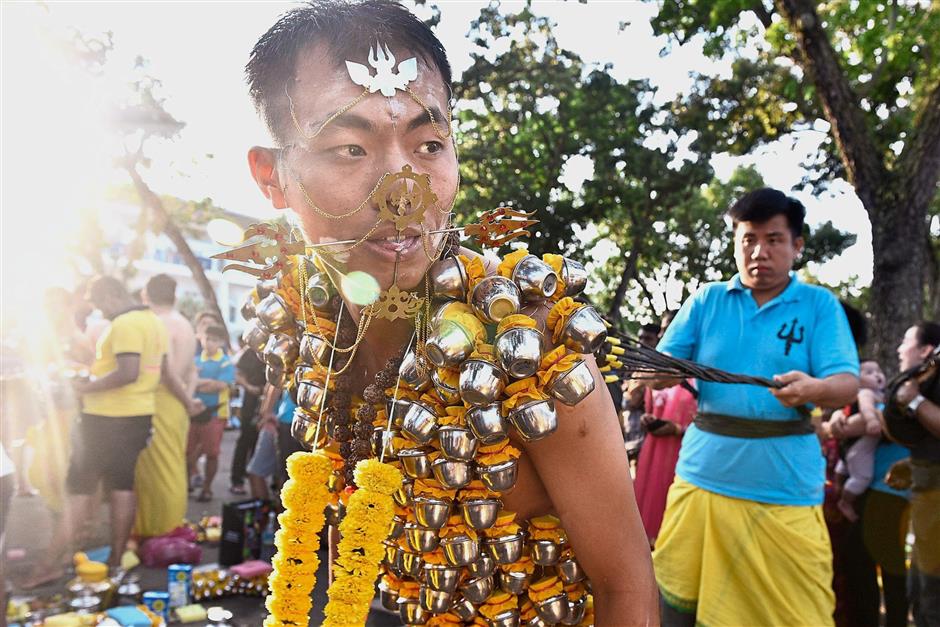 A Chinese devotee whose back is pierced with hooks being pulled by a friend using ropes in Lorong Kulit, George Town.

Sporting a colourfully pink and orange-themed alagu kavadi (fancy kavadi), he carried the kavadi for hours in his spiritual journey to the temple.

“I do this as part of my penance to Lord Muruga. It is a way of thanking God for blessing my family and I with good health and good life,” he said when met at the Sri Muthu Mariamman Temple in Lorong Kulit, George Town. Devotees carrying milk pots as they take the steps up the Waterfall Hilltop Temple.

Dr Sarveswara said he spent a month making the kavadi, with the help of his family and friends.

Thousands of devotees thronged Penang for the three-day celebration, which began with the golden chariot departing from the Arulmigu Sree Maha Mariamman Temple in Queen Street to the Arulmigu Balathandayuthapani Hilltop Temple, also known as the Waterfall Hilltop Temple on Tuesday.

It was followed by the silver chariot from the ‘Kovil Veedu’ in Penang Street. 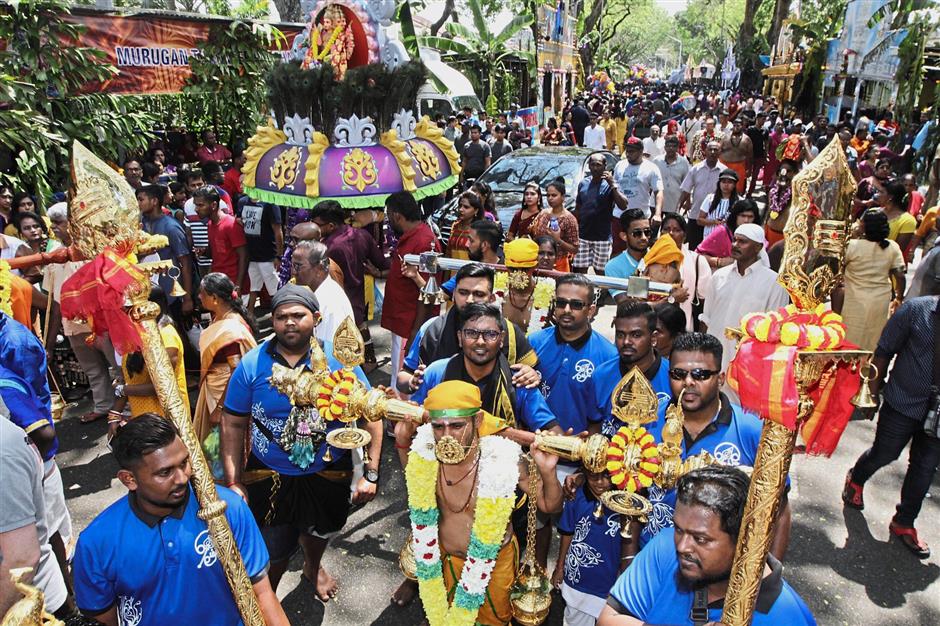 S. Thiagu, 36, bearing a heavy golden kavadi on his shoulders at the Thaipusam festival in Jalan Utama.

Also at the Sri Muthu Mariamman Temple in Lorong Kulit, M.Yogeshsan, 19, had 600 mini-silver pots hooked to his chest.

He was fulfilling his vow for the good health of his brother in Singapore.

“This is my first time carrying a kavadi. I am happy, but apprehensive of the entire process as I observe a strict vegetarian diet and offer prayers.

“I will be carrying the kavadi again next year,” he said. “This year, I didn’t get to smash any coconut but I will come back to do it next year,” she said.

Meanwhile, cold drinks and vegetarian meals were aplenty along the many thaneer panthal (refreshment stalls) in Jalan Utama. 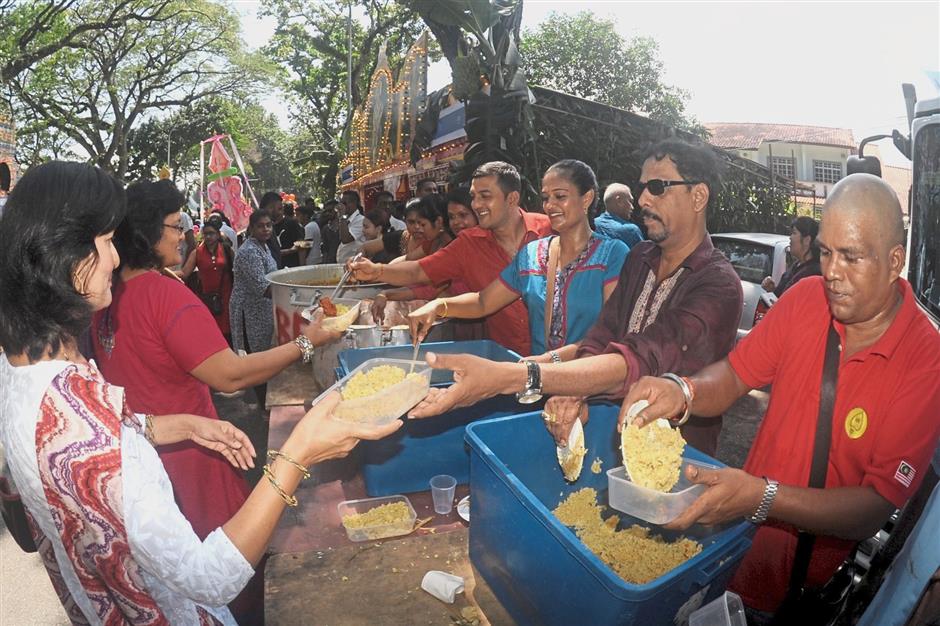 They were given out to devotees and visitors who made their way to the Waterfall Hilltop Temple and the Nattukotai Chettiar Temple in Jalan Kebun Bunga yesterday.

Each thaneer panthal has a distinctive style, with the name of its organisation or sponsor displayed in a creative way along the road.

At the refreshment booth of Malaysia Airlines (MAS), about 20 of its staff from Penang and Kuala Lumpur were seen distributing food packs and refreshments to over 3,000 people on Tuesday and yesterday.

Operating for the seventh year, its Penang organising committee head Arjunan Gopal said they had raised RM28,000 for the thaneer panthal project. A little boy gets his hair shaved at the temple grounds in Jalan Utama, Penang.

“Any balance from the proceeds will be donated to MAS staff members in need of funds for medical reasons or in the case of emergency,” he said.

Kuala Lumpur organising committee head Myhendran Raman said their chief executive officer Captain Izham Ismail had given his support to the volunteers in the celebration this year.

Penang police chief Comm Datuk A. Thaiveegan said some 1,500 policemen were on duty throughout the festival. A devotee shouldering a colourful kavadi at the Waterfall Hilltop Temple in Jalan Kebun Bunga.

“There will be three shifts – with some 500 on duty at one time. We will deploy more if necessary,” he said at the Penang police’s refreshment booth in Jalan Utama after a walkabout here yesterday.

Comm Thaiveegan said no untoward incidents were reported so far, adding that devotees and tourists should take care of their belongings and not bring too many valuables along.

“Those who bring their children must also keep a watchful eye on them,” he said. 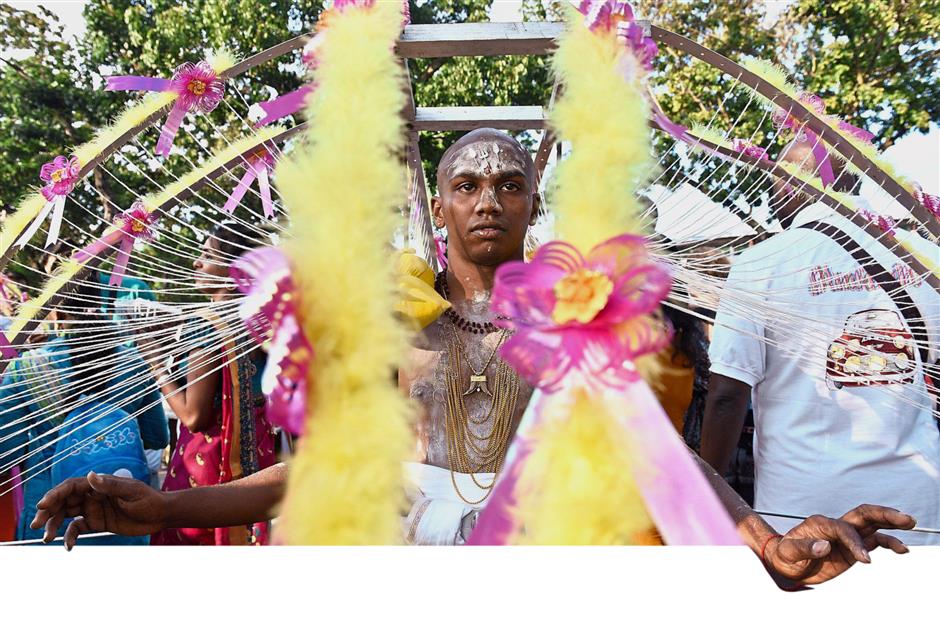 A devotee in deep trance bearing a kavadi.

On Tuesday, Penang PKR Wanita vice-chief M. Santha was appointed as the commissioner of the Penang Hindu Endowment Board (PHEB).

Santha, who was also present, thanked the state government for the appointment.