EACH year as Thaipusam draws near, the Kurup family in Selayang Baru carefully brings out a kavadi that has been in the family for three generations.

First used by the family patriarch, the late MGK Kurup in the 60s, the rustic yet resplendent 50-year-old kavadi has become a symbol for the family.

Made of a wooden structure complete with a majestic peacock (the vehicle of Lord Muruga) crafted out of real peacock feathers, the kavadi leads the procession for many kavadi bearers who join the Kurup family on their holy journey.

Today, Kurup’s 30-year-old grandson Sudhankumar Silvakumar is all prepared to hoist the family legacy on his shoulders for Thaipusam in Batu Caves.

The family is also known for its services in inducing trance in devotees to help them fulfil their vows. Devotees helping a family member go up the steps of Batu Caves on bended knee to offer prayers ahead of Thaipusam.

“Our family is known as the old timers for kavadi bearing and trance initiation.

“People from all over Selayang and Batu Caves have sought our family’s assistance when carrying the kavadi, paal kudam (milk pots) and other forms of penance,” he added.

Kavadi, paal kudam, kanni mullu (lime hooks), and spear needles are some of the thanksgiving offering for Lord Muruga during Thaipusam, held in the month of Thai.

His grandfather first started helping people fulfil their vows in 1962 and after his death in 1991, family members took up the responsibilities.

Despite the passing of Sudhankumar’s father Silvakumar last month, the family decided to go ahead with their task as usual for the sake of others. 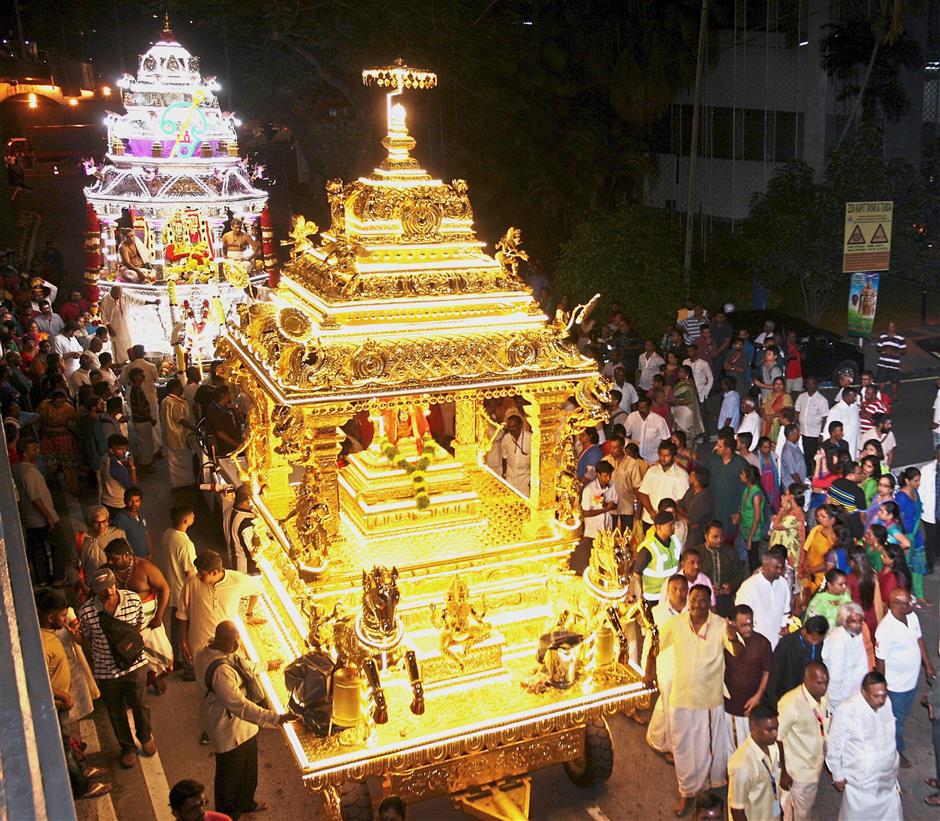 The Sri Maha Mariamman Temple golden and silver chariots being pulled by devotees all the way to Batu Caves. This is the first time the golden chariot is being used for the procession. Previously, there was only the silver chariot.

“My grandfather instilled this in us, it is a responsibility we have towards people who come here trusting us. We will continue to do so for everyone else,” he added.

Their entire ritual begins five days before Thaipusam with the guru poojai, a special prayer to commemorate and remember Kurup, their guru or teacher.

The next three to four days, devotees who want to perform penance will undergo a session to get them prepared to get into a trance.

On Thaipusam day, there will be two groups of people, one in the morning and another in the afternoon, who will carry the kavadi.

“We split the groups so people taking the kavadi in the evening can help those in the morning and vice versa,” he added. Sudhankumar (centre) being assisted by Uthaya Suthern (left) and Thinesh as he tests out a kavadi they built for Thaipusam.

This cooperation is what has drawn their regular friends to join the trance sessions every year.

Puspanathan Muniandy, 37, who has been with them for eight years now, said he loved that the team was like a family unit and the discipline they had.

“Everything is very organised here and systematic. It is different from all the places I have seen. It feels like a family. I enjoy coming here,” he added.

Puspanathan said he liked the fact that all the kavadi are prepared on the eve before the Ganapathy Homam at 5pm. This way there are no last minute problems ahead of the festival.

Sudhankumar’s cousin Thinesh Baskaran, 29, said they also refrained from smoking cigar and carrying weapons, a regular practice for many except for their followers. Those who offer penance may also opt to shave their heads today.

“Things like this make a difference for our followers. We also advice them on making a vow and often suggest that first-timers start small to get used to the ritual,” said Thinesh.

They also have volunteers like Sudhankumar’s friend Uthaya Suthern Gobi, 30, who comes each year to help the family and devotees with any task at hand.

“I have known Sudhankumar since our university days and was exposed to the grand celebrations they have here. I liked the atmosphere and decided to help them,” he added.

The morning round start as early as 6am and the team is back at noon for the free meal giveaway at the Kurup house in Selayang Baru.

This year the team will make adjustments to accommodate the lunar eclipse that is expected to last from 7pm to 11.30pm today.

“We will move everything forward and hope to be back home by 7.30pm to avoid the eclipse,” he added. 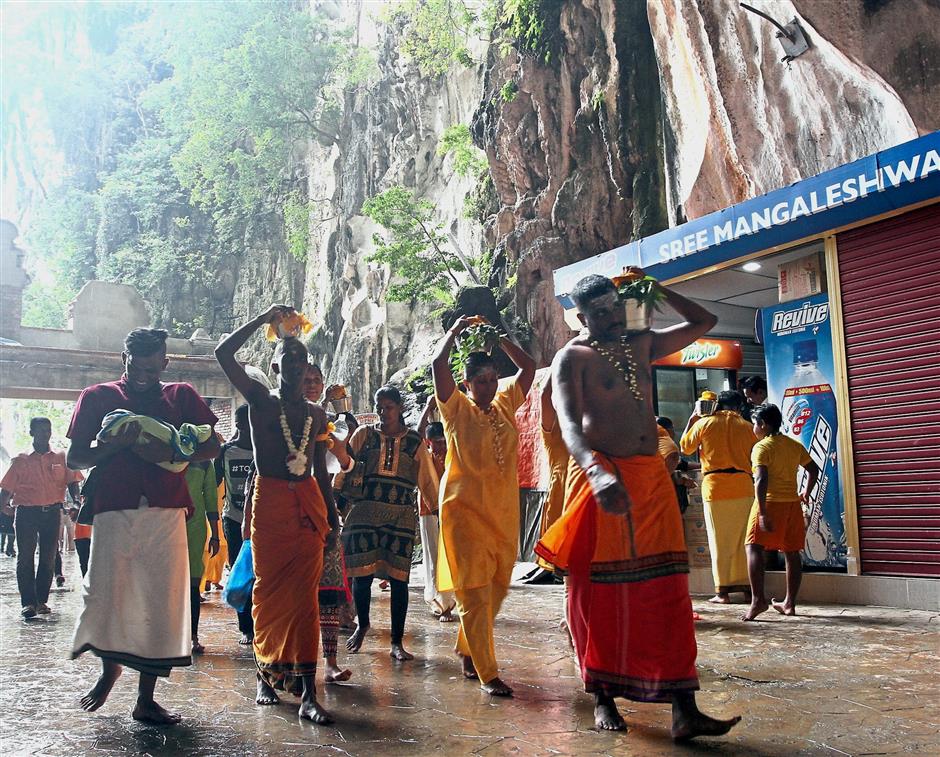 Batu Caves is crowded with people offering their prayers and vows ahead of Thaipusam due to the lunar eclipse tonight.

In fact they are not the only ones attempting to avoid the eclipse as most Hindus began their offerings over a week ago. The last weekend saw a surge in the number of pilgrims raising questions over the number of people who would actually visit the temple during the eclipse today.

Paal kudam bearer Kanaga Raja said he will avoid the temple during the eclipse and stay home.

“Based on scientific research, eclipse can affect our health so I plan on staying home during that time. He usually carries the paal kudam on the eve after midnight and will do so again today.

“I personally believe that after 6pm today there will not be many devotees offering prayers as per the general belief among Hindus,” he added.

Kanaga Raja also said many were afraid since most temples would not open during the eclipse except for the Sri Subramaniar Temple in Batu Caves, raising doubts over the safety and health of devotees.