(From left) Ch’ng, Chan, Penang Girl Guides Association president Puan Sri Su Hashim and Girl Guides council member Lim Bee Choo showing the classic biscuit tins produced in collaboration with Ghee Hiang. One of the tins has a picture of Agnes and her autograph while the other shows a picture of a George Town heritage shop house.

THE 162-year-old Ghee Hiang company and the Penang Girl Guides Association, which will be 100 years old next year, have come together to offer classic biscuit tins.

They come in two designs, including one with a portrait of Girl Guides founder Agnes Baden-Powell and her autograph.

The other tin features a delicately embossed artwork of a George Town heritage shop house.

The tins commemorate the Girl Guides Association International Camp 2018 to be held at City Park from April 3 to 8.

“This is the first time we are producing specially commissioned biscuit tins for an organisation,” said Ghee Hiang executive director Ch’ng Huck Theng during a ceremony at Ghee Hiang’s Burma Road outlet recently. 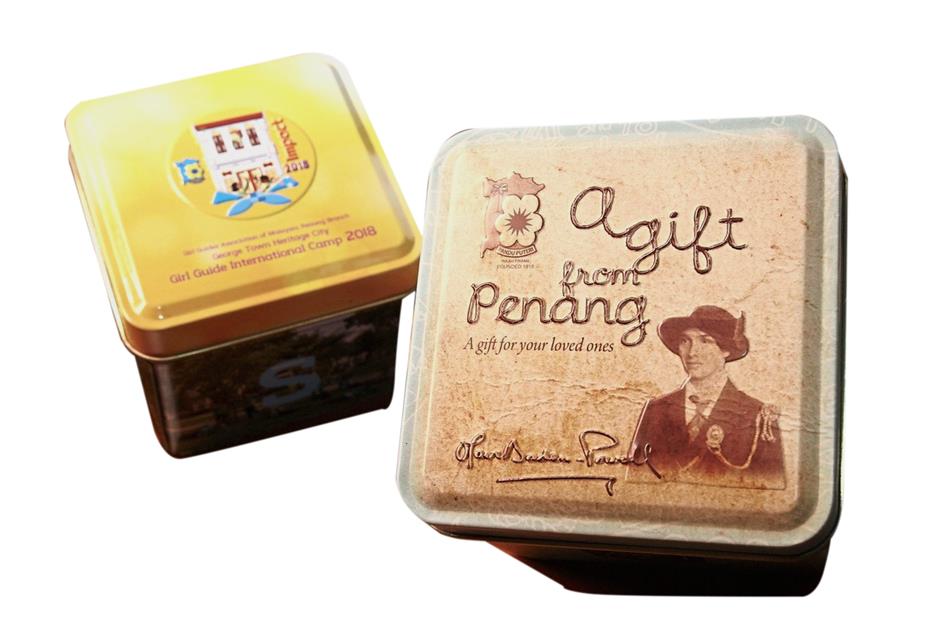 Girl Guides statewide will be selling two pieces of the time-honoured, extra-large Ghee Hiang Oriental Almond Cookies in each tin for RM12.

“The Girl Guides have always dreamed about having our own ‘Penang Girl Guides Cookies’ and this has finally become a reality.”

Chan said campers would be coming from 13 countries for the international camp and it would be a good venue to promote the tins.

Agnes is the younger sister of Lord Robert Baden-Powell, the founder of the global scouting movement in 1907.

In the first rally of Scouts in 1909 in England, several hundred uniformed Girl Scouts trooped in too.

Robert decided that a single-gender organisation would be good and urged Agnes to form the Girl Guides movement in 1910.

Girl Guide and Girl Scout cookies in the Western world come in classic chocolate and vanilla flavours and also strange ones like a cranberry-and-chocolate one called ‘Thank You Berry Munch’.

They are an annual treat in the United States and Canada and are often sold by the Girl Guides there to raise funds.