Penang struck by yet another deluge

PENANGITES woke up to a cloudy and rainy morning as continuous downpour lasting for hours inundated several parts of the state.

Chow said the floods coincided with the high tide which was at 2.34m at 2.30am. 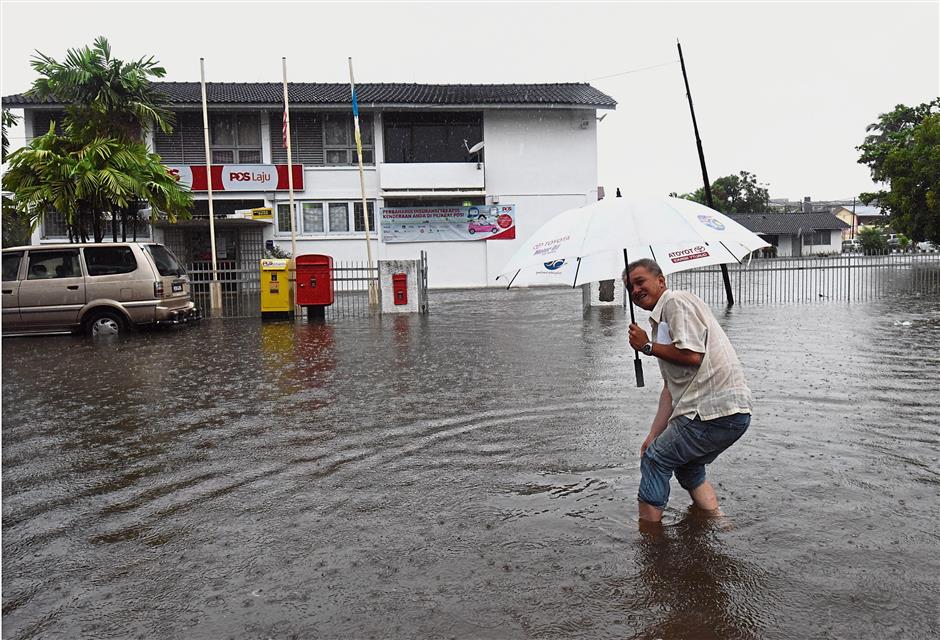 A customer rolling up his pants to get to the post office in Jalan Mak Mandin, Butterworth.

“The cumulative rain at Sungai Pinang and Sungai Ayer Itam stations were at 159mm and 129mm respectively.

“The drainage systems in the low-lying areas could not deal with the runoff as well. Flood victims wading through the water in the Hong Seng Estate in Georgetown,Penang. SOCIAL MEDIA // 05 JAN 2018

In Butterworth, Chow said Mak Mandin was hit by floods of between 10cm and 30cm.

“This was caused by continuous rain and unsystematic drainage systems. Authorities clearing a boulder that fell onto the road in Teluk Bahang.

State Welfare, Caring Society and Environment Committee chairman Phee Boon Poh said one family had to be relocated to the Nahdzatul Islah religious school in Kumbang Semang, Penanti, while nine families were moved to the Mak Mandin evacuation centre.

Although yesterday’s flood was not as bad as the Nov 4 and 5 floods last year, it still caused anxiety among Jalan P. Ramlee residents.

The founder of an old folks home in Lengkok P. Ramlee, Peter Tan decided to move the residents to safety when the rain did not stop after a few hours.

“Luckily, the water just reached our entrance, but I did not want to take chances. So, I moved them to a temporary shelter,” he said.

The home was badly affected in the Nov 4 and 5 floods when one of its residents Lau Guek Jee, 64, died.

Another resident M. Divakaran, 28, said whenever it rains for a few hours, they needed to move their belongings to higher ground. 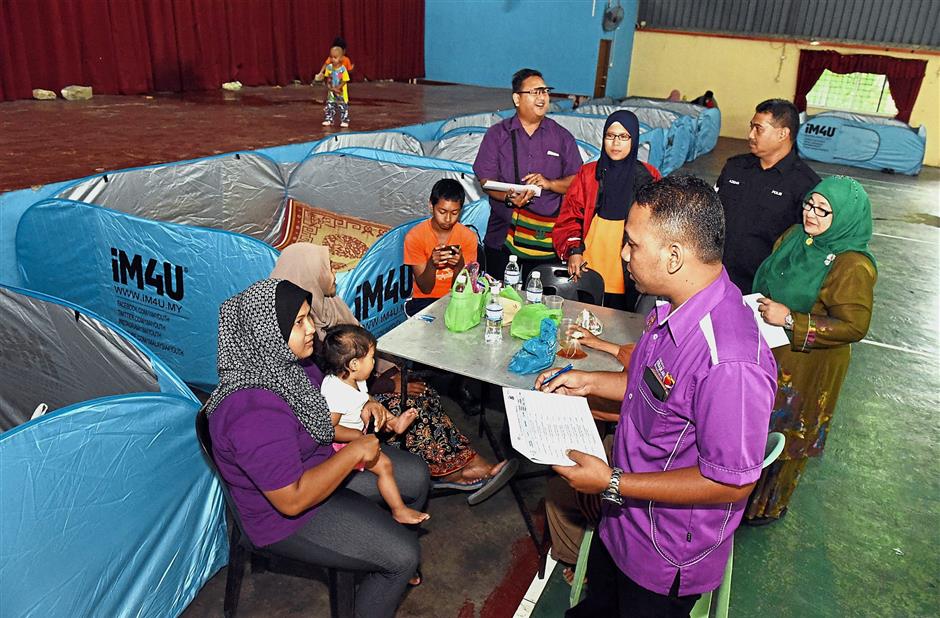 “About 4am, we started to move the baskets of vegetables to the upper floor of my shop,” he said.

Meanwhile, at Shamrock Beach in Batu Feringghi, the residents were concerned about soil erosion after the colour of the stream discharging into the sea turned into ‘teh tarik’.

Tanjung Bungah assemblyman Teh Yee Cheu said it was a common thing to see after the rain since the small stream carries mud washed from nearby developments.

“This happened many times over the years as those areas have already been developed,” he said yesterday.

In the hilly Jalan Paya Terubong, two Myanmar workers on a motorcycle stopped in the rain to sweep away small rocks washed down onto the road near the Green Gardens apartments at about 9.30am.

The workers said they were working for a contractor who is responsible for the cleanliness of the road.

“The rocks are dangerous for road users, especially motorcyclists,” one of them said.